The Polish Second Army (Polish: Druga Armia Wojska Polskiego, 2. AWP for short) was a Polish Army unit formed in the Soviet Union in 1944 as part of the People's Army of Poland. The organization begun in August under the command of generals Karol Świerczewski and Stanislav Poplavsky, and the formation under command of general Świerczewski entered active duty in January 1945. The Second Army suffered heavy losses at the Battle of Bautzen during April 22–26, 1945. Subsequently, the Second Army was part of the final great Soviet offensive of World War II in Europe, the drive on Prague. In August 1945 most of the formation was used to create the Poznań Military District.

In 1944, with the Soviet advance now enveloping increasing number of territories of the Second Polish Republic, occupied by Nazi Germany for the past several years, the Soviet high command saw the opportunity to recruit more Poles into the Soviet-controlled People's Army of Poland. The first plans called for formation of Polish Second Army and Polish Third Army, which were to be joined with the Polish First Army into a Polish Front (at that time the Polish forces were part of the 1st Belorussian Front). The early plans called for the Second Army to be ready for combat by the end of September.

However soon it became apparent that this plan was flawed, as there were not enough recruits to fill the ranks of officers. A significant number of pre-war Polish NCOs and officers either:

Thus while the recruits to the pro-Soviet Polish Committee of National Liberation were able to fill most private and NCOs slots, the army had only about half of the needed number of officers; 33% of them young (under 25 years) and about 50% with no formal training (only secondary education). Although the Soviets always tried to control such allied formations by transferring a significant numbers of Soviet officers to those units, they found themselves having to fill about 50% of the officer positions in the Second Army (for several months in 1944, the commander of the Army was in the hands of the Soviet general, Stanislav Poplavsky). The situation of the Third Army was even more dire, which eventually led to the cancellation of plans for both the creation of the Third Army and the Polish Front.

The Second Army reached operational level in the beginning of January 1945.

While some formations of the Second Army were engaged in combat as parts of the 1st Belarusian Front in January, most of the Army was regrouped in early February near Kutno, Łódź, Łask and Piotrków Trybunalski. Near the end of February the Army moved towards Piła, Krzyż Wielkopolski and Czarnków to counter possible threat of German counterattack from the Poznań area. In the first half of March the army acted as a reinforcement for the 1st Belarusian Front, and was regrouped in the area of Gorzów Wielkopolski - Barlinek - Pełczyce - Chłopowo - Klasztorne - Słonów. In the second half of March the Army was transferred to the 1st Ukrainian Front, and regrouped north of Wrocław on the line Brzeg Dolny - Trzebnica - Oleśnica in order to prevent any attempt to escape German troops from besieged Wrocław. With the preparations to the battle of Berlin, the Army took positions near the Lusatian Neisse (Nysa Łuzycka) on 10–11 April.

A Memorial stone in Bautzen

The Army was given the task to advance towards Dresden and Bautzen on 16 April. Although the Army managed to advance, it had insufficient reinforcements of its own and the planned Soviet reinforcements were delayed, which made it vulnerable to the German counterattacks. The Second Army suffered very heavy losses at the Battle of Bautzen during April 22–26, with 18,232 dead or missing (22% of total combat personnel), and over 50% of armor. The battle was one of the most costly in terms of lives in the history of Polish military.

Subsequently, in May, the Second Army was part of the final great Soviet offensive of World War II in Europe, the drive on Prague. By the time most Germans units have begun to surrender, the Army units have reached the town of Mělník.

After the End of World War II in Europe, the Second Army was regrouped in the vicinity of Wrocław. On the 17 May it was transferred from the 1st Ukrainian Front to the High Command of the People's Army of Poland. Until August 1945 the Army was tasked with guarding the Recovered Territories and the new Polish-German frontier on the Oder-Neisse line. Among other changes, the 12th Infantry Division was reformed to guard the border in the Szczecin area. The army was disbanded in August; most of the formation was used to create the Poznań Military District. 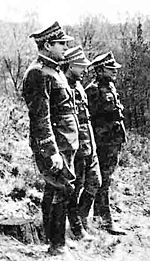 Karol Świerczewski (front). The two other officers are Marian Spychalski and Michał Rola-Żymierski