Polish orthography is the system of writing the Polish language. The language is written using the Polish alphabet, which derives from the Latin alphabet, but includes some additional letters with diacritics. The orthography is mostly phonetic, or rather phonemic – the written letters (or combinations of them) correspond in a consistent manner to the sounds, or rather the phonemes, of spoken Polish. For detailed information about the system of phonemes, see Polish phonology. 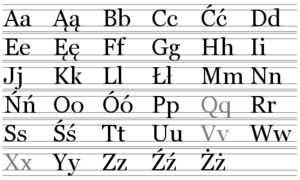 The letters q (named ku), v (named fau), and x (named iks) do not belong to the Polish alphabet, but are used in some foreign words and commercial names. In loanwords they are often replaced by kw, w, and ks, respectively (as in kwarc "quartz", weranda "veranda", ekstra "extra").

Note that (unlike in languages such as French) Polish letters with diacritics are treated as fully independent letters in alphabetical ordering. For example, być comes after bycie. The diacritic letters also have their own sections in dictionaries (words beginning with ć are not usually listed under c).

Polish additionally uses the digraphs ch, cz, dz, dź, dż, rz, and sz. Digraphs are not given any special treatment in alphabetical ordering. For example, ch is treated simply as c followed by h, and not as a single letter as in Czech.

^1 See below for rules regarding spelling of alveolo-palatal consonants.

^2 May be glottal [ɦ] in a small number of dialects.

In occasional words, letters that normally form a digraph are pronounced separately. For example, ⟨rz⟩ represents /rz/, not /ʐ/, in words like zamarzać ("freeze") and in the name Tarzan (note that in both these examples, there is a syllable boundary between the r and the z).

Voiced consonant letters frequently come to represent voiceless sounds (as shown in the above tables). This is due to the neutralization that occurs at the end of words and in certain consonant clusters; for example, the ⟨b⟩ in klub ("club") is pronounced like a ⟨p⟩, and the ⟨rz⟩ in prze- sounds like ⟨sz⟩. Less frequently, voiceless consonant letters can represent voiced sounds; for example, the ⟨k⟩ in także ("also") is pronounced like a ⟨g⟩. The conditions for this neutralization are described under Voicing and devoicing in the article on Polish phonology.

The spelling rule for the alveolo-palatal sounds /ɕ/, /ʑ/, /t͡ɕ/, /d͡ʑ/ and /ɲ/ is as follows: before the vowel ⟨i⟩ the plain letters ⟨s z c dz n⟩ are used; before other vowels the combinations ⟨si zi ci dzi ni⟩ are used; when not followed by a vowel the diacritic forms ⟨ś ź ć dź ń⟩ are used. For example, the ⟨s⟩ in siwy ("grey-haired"), the ⟨si⟩ in siarka ("sulphur") and the ⟨ś⟩ in święty ("holy") all represent the sound /ɕ/.

Special attention should be paid to ⟨n⟩ before ⟨i⟩ plus a vowel. In words of foreign origin the ⟨i⟩ causes the palatalization of the preceding consonant ⟨n⟩ to /ɲ/, and it is pronounced as /j/. This situation occurs when the corresponding genitive form ends in -nii, pronounced as /ɲji/, not with -ni, pronounced as /ɲi/ (which is a situation typical to the words of Polish origin). For examples, see the table in the next section.

Other issues with i and j

Except in the cases mentioned in the previous paragraph, the letter ⟨i⟩ if followed by another vowel in the same word usually represents /j/, but it also has the palatalizing effect on the previous consonant. For example, pies ("dog") is pronounced /pˈjɛs/. Some words with ⟨n⟩ before ⟨i⟩ plus a vowel also follow this pattern (see below). In fact i is the usual spelling of /j/ between a preceding consonant and a following vowel. The letter ⟨j⟩ normally appears in this position only after ⟨c⟩, ⟨s⟩ and ⟨z⟩ if the palatalization effect described above has to be avoided (as in presja "pressure", Azja "Asia", lekcja "lesson", and the common suffixes -cja "-tion", -zja "-sion": stacja "station", wizja "vision"). The letter ⟨j⟩ after consonants is also used in concatenation of two words if the second word in the pair starts with ⟨j⟩, e.g. wjazd "entrance" originates from w + jazd(a). The pronunciation of the sequence wja (in wjazd) is the same as the pronunciation of wia (in wiadro "bucket").

In some rare cases, however, when the consonant in case is preceded by another consonant, -ii may be pronounced as /i/, but the preceding consonant is still palatalized, for example, Anglii (genitive etc. of Anglia "England") is pronounced /anɡlˈi/. (The spelling Angli, very frequently met with on the Internet, is simply an error in orthography, caused by this pronunciation.)

The words of Polish origin do not have the ending -ii but simple -i, e.g. ziemi (genitive of ziemia).

For example (pay attention to the upper- and lower-case letters):

Apart from the cases resulting from the sections above, there are three sounds in Polish that can be spelt in two different ways, depending on the word:

Notice that doubled letters represent separate occurrences of the sound in question; for example Anna is pronounced /ˈanna/ in Polish. In practice a doubled consonant is often realized as a single sound pronounced in a prolonged manner.

There are certain clusters where a written consonant would not normally be pronounced. For example, the ⟨ł⟩ in the words mógł ("could") and jabłko ("apple") is omitted in ordinary speech.

Names are generally capitalized in Polish as in English. Polish does not capitalize the months and days of the week, nor adjectives and other forms derived from proper nouns (for example, angielski "English").

Titles such as pan ("Mr"), pani ("Mrs/Ms"), doktor etc. and their abbreviations are not capitalized, except in polite address. Pronouns (chiefly those of the second person) are often capitalized out of politeness when they refer to the person one is writing to.

Polish punctuation is similar to that of English. However there are more rigid rules concerning use of commas—subordinate clauses are almost always marked off with a comma, while it is normally considered incorrect to use a comma before a coordinating conjunction with the meaning "and" (i or oraz).

Abbreviations (but not acronyms or initialisms) are followed by a period when they end with a letter other than the one which ends the full word. For example, dr has no period when it stands for doktor, but takes one when it stands for an inflected form such as doktora and prof. has period because it comes from profesor (professor).

Apostrophes are used not to separate foreign-spelt stems from Polish inflected endings, as it is commonly (erroneously) worded, but to mark the elision of the final letter(s) of the foreign words unspoken before the Polish endings, as in Tony'ego (genitive of "Tony"; because of unspoken "y", pronounced Tonego) but Johna (genitive of "John"; final "n" is spoken); cf. genitive of Charles: English name—Charlesa (final "s" is spoken, pronounced Czarlza), French name—Charles'a (final "s" is not spoken, pronounced Szarla).

Poles adopted the Latin alphabet in the 12th century. However that alphabet was ill-equipped to represent certain Polish sounds, such as the palatal consonants and nasal vowels. Consequently, Polish spelling in the Middle Ages was highly inconsistent, as different writers used different systems to represent these sounds, For example, in early documents the letter c could signify the sounds now written c, cz, k, while the letter z was used for the sounds now written z, ż, ś, ź. Writers soon began to experiment with digraphs (combinations of letters), new letters (φ and ſ, no longer used), and eventually diacritics.

The Polish alphabet was one of two major forms of Latin-based orthography developed for Slavic languages, the other being Czech orthography, characterized by carons (háčeks), as in the letter č. The other major Slavic languages which are now written in Latin-based alphabets (Slovak, Slovene, Bosnian, and Croatian) use systems similar to the Czech. However a Polish-based orthography is used for Kashubian and usually for Silesian, while the Sorbian languages use elements of both systems.

The Polish letters which are not present in the English alphabet have the following HTML codes and Unicode codepoints:

For other encodings, see the following table. Numbers in the table are hexadecimal.

A common test sentence containing all the Polish diacritic letters is the nonsensical "Zażółć gęślą jaźń".