A politburo /ˈpɒlɪtˌbjʊəroʊ/ is the executive committee for a number of (usually communist) political parties.[1]

The term "politburo" in English comes from the Russian Politbyuro (Политбюро), itself a contraction of Politicheskoye Byuro (Политическое бюро, "Political Bureau"). The Spanish term Politburó is directly loaned from Russian, as is the German Politbüro. Chinese uses a calque (Chinese: 政治局; pinyin: Zhèngzhìjú), from which the Vietnamese (Bộ Chính trị), and Korean (정치국, 政治局 Jeongchiguk) terms derive.

The very first politburo was created in Russia by the Bolshevik Party in 1917 to provide strong and continuous leadership during the Russian Revolution occurring during the same year.[2][3] The first Politburo had seven members: Lenin, Zinoviev, Kamenev, Trotsky, Stalin, Sokolnikov and Bubnov.[4] During the 20th century, nations that had a politburo included the USSR, East Germany, Afghanistan, Czechoslovakia and China, amongst others. Today, there are five countries that have a communist politburo system (China, North Korea, Laos, Vietnam and Cuba).[5] 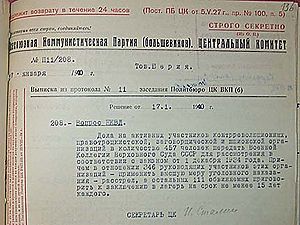