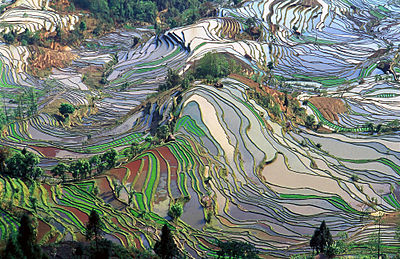 Political ecology studies the complex interaction between economics, politics, technology, social tradition and the biological environment. These terraced rice fields in Yunnan, China, evidence how the environment is shaped by and shapes economy and society.

The term "political ecology" was first coined by Frank Thone in an article published in 1935.[3] It has been widely used since then in the context of human geography and human ecology, but with no systematic definition. Anthropologist Eric R. Wolf gave it a second life in 1972 in an article entitled "Ownership and Political Ecology," in which he discusses how local rules of ownership and inheritance "mediate between the pressures emanating from the larger society and the exigencies of the local ecosystem".[4] Other origins include other early works of Wolf as well as John W. Cole at the University of Massachusetts,[importance?] Hans Magnus Enzensberger and others in the 1970s and 1980s.

The origins of the field in the 1970s and 1980s were a result of the development of development geography and cultural ecology.[5] Historically, political ecology has focused on phenomena in and affecting the developing world; since the field’s inception, "research has sought primarily to understand the political dynamics surrounding material and discursive struggles over the environment in the third world".[6]

Political ecology’s broad scope and interdisciplinary nature lends itself to multiple definitions and understandings. However, common assumptions across the field give the term relevance. Raymond L. Bryant and Sinéad Bailey have developed three fundamental assumptions in practicing political ecology:

In addition, political ecology attempts to provide critiques and alternatives in the interplay of the environment and political, economic and social factors. Paul Robbins asserts that the discipline has a "normative understanding that there are very likely better, less coercive, less exploitative, and more sustainable ways of doing things".[8]

From these assumptions, political ecology can be used to:

Political ecology’s movement as a field since its inception in the 1970s has complicated its scope and goals. Through the discipline’s history, certain influences have grown more and less influential in determining the focus of study. Peter A. Walker traces the importance of the ecological sciences in political ecology.[9] He points to the transition, for many critics, from a ‘structuralist’ approach through the 1970s and 1980s, in which ecology maintains a key position in the discipline, to a 'poststructuralist' approach with an emphasis on the 'politics' in political ecology.[10] This turn has raised questions as to the differentiation with environmental politics as well as the field’s use of the term of 'ecology'. Political ecological research has shifted from investigating political influence on the earth's surface to the focus on spatial-ecological influences on politics and power—a scope reminiscent of environmental politics.

Political ecologists often use political economy to analyze environmental issues. Early and prominent examples of this were The Political Economy of Soil Erosion in Developing Countries by Piers Blaikie in 1985, which traced land degradation in Africa to colonial policies of land appropriation, rather than over-exploitation by African farmers, and Silent Violence: Food, Famine and Peasantry in Northern Nigeria by Michael Watts in 1983, which traced the famine in northern Nigeria during the 1970s to the effects of colonialism, rather than an inevitable consequence of the drought in the Sahel.

Relationship to anthropology and geography

Originating in the 18th and 19th centuries with philosophers such as Adam Smith, Karl Marx, and Thomas Malthus, political economy attempted to explain the relationships between economic production and political processes.[12][13] It tended toward overly structuralist explanations, focusing on the role individual economic relationships in the maintenance of social order.[14] Eric Wolf used political economy in a neo-Marxist framework which began addressing the role of local cultures as a part of the world capitalist system, refusing to see those cultures as "primitive isolates".[15] But environmental effects on political and economic processes were under-emphasised.[13]

Conversely, Julian Steward and Roy Rappaport's theories of cultural ecology are sometimes credited with shifting the functionalist-oriented anthropology of the 1950s and 1960s and incorporating ecology and environment into ethnographic study.[16]

Geographers and anthropologists worked with the strengths of both to form the basis of political ecology.[17][18][19][20][21][22][23] PE focuses on issues of power, recognizing the importance of explaining environmental impacts on cultural processes without separating out political and economic contexts.

The application of political ecology in the work of anthropologists and geographers differs. While any approach will take both the political/economic and the ecological into account,the emphasis can be unequal. Some, such as geographer Michael Watts, focus on how the assertion of power impacts on access to environmental resources. His approach tends to see environmental harm as both a cause and an effect of “social marginalization”.[24]

Political ecology has its strengths and weaknesses. At its core, it contextualizes political and ecological explanations of human behavior. But as Walker[25] points out, it has failed to offer “compelling counter-narratives” to “widely influential and popular yet deeply flawed and unapologetic neo-Malthusian rants such as Robert Kaplan's (1994) 'The coming anarchy' and Jared Diamond's (2005) Collapse (385). Ultimately, applying political ecology to policy decisions – especially in the US and Western Europe – will remain problematic as long as there is a resistance to Marxist and neo-Marxist theory.[26]

There is a divergence of ideas between conservation science and political ecology. conservation through biodiversity and the creation of conservation units. Biodiversity, meaning biological diversity, can be briefly defined as "the number and dominance of species present in an ecosystem".[28] Many, however, feel that in cases where the local indigenous people are using slash and burn are, in effect, harming the area or in other cases where logging is being done. In some cases, biosphere reserves have been created. Hanna et al. states:

Biosphere reserves can be platforms for building place specific, mutually reinforcing policies and practices that facilitates conservation and sustainable use of biodiversity, economic growth and other needs and aspirations of local communities and the emergence of knowledge based governance and management arrangements at local, provincial and national levels.[29]

These reserves are made in places such as conservation units like protected areas. It is important to not forget about the people who are also affected by the creation of these units.

With the creation of these conservation units, "political ecologists have devoted some energy to the study of protected areas, which is unsurprising given political ecology's overall interest in forms of access to, and control over resources".[30] The local people must in some cases show that they are as important as the area which they occupy, despite the thought that those who slash and burn are seen as doing harm. Most people have occupied the same areas for many generations and, because of their practices, can also be seen as an important aspect of the area. Just as, Dove and Carpenter state, "indigenous people have important environmental knowledge which could contribute to conservation".[31] However, some people are removed from the land. In any case, others who get involved such as NGOs and the government then make decisions about who can access the land and how it can be used, putting regulations on the local people. Sutton explains this as:

In a few cases, perhaps especially tragic local groups have been displaced to create national parks and reserves to ‘conserve’ the forest. Fortunately, most conservation bodies are now aware that, if a group has been using and managing a forest for several thousand years, throwing it off the land is more apt to destroy the forest ecosystem than to preserve it. (Sutton 2004: 302)

Some prominent contemporary scholars include:

Scholarly journals that have been key to the development (and critique) of this field include: