The political status of Crimea is the subject of a political and territorial dispute between Russia and Ukraine. While Russia gained control of the territory in 2014, had fully integrated it by July 2015,[1] and continues to administer it as two federal subjects of Russia, Ukraine and the majority of international governments continue to regard Crimea as an integral part of Ukraine.

The dispute came into being after the Autonomous Republic of Crimea and Sevastopol merged as a single united state under the name of Republic of Crimea and then, following a snap referendum on joining Russia that official results showed backed the proposal, unilaterally declared their independence from Ukraine. This state was then annexed by Russia, where it became the aforementioned federal district, whereas the Autonomous Republic became the "Republic of Crimea" as a Russian republic and Sevastopol became a Russian federal city. However, Ukraine and the majority of the international community do not consider the merge, the independence, the referendum, nor the annexation legitimate and still consider both entities as divisions of Ukraine. Despite international opinion however, the currency, tax and legal system are all operational under Russian jurisdiction.

Russia signed Budapest Memorandum on Security Assurances in 1994 Respect Belarusian, Kazakh and Ukrainian independence and sovereignty and the existing borders.

Evolution of status of the Crimean Peninsula within independent Ukraine

After the Crimean referendum of 1991, which asked whether Crimea should be elevated to a signatory of the New Union Treaty (that is, became a union republic on its own), Ukraine restored Crimea's autonomous status, but confirmed that autonomy restored as a part of the Ukrainian SSR. The Crimean Oblast council became Supreme Council of Crimea and, on 4 September 1991, passed the Declaration of state sovereignty of Crimea.[2]

Following the dissolution of the Soviet Union, the autonomy renamed itself the Republic of Crimea.[3] The Ukrainian government initially accepted its name, but not its claims to be a state. According to Ukrainian law "On status of the autonomous Republic of Crimea", passed on 29 April 1992, "Republic of Crimea is an autonomous part of the Ukraine and independently decides on matters, which are delegated to it by the Constitution and laws of the Ukraine" (art. 1).[4] The Regional Supreme Council, on the contrary, insisted that "Republic of Crimea is a legal democratic state", which "has supremacy in respect to natural, material, cultural and spiritual heritage" and "exercises its sovereign rights and full power" on its territory (art. 1 of the May 1992 Constitution), but also a "part of the Ukraine and establishes relations in it on a basis of the treaty and agreements" (art. 9).[5] Both Ukrainian law on autonomy status[6] and the 1992 Constitution of Crimea[7] were amended later that year, putting the Republic's status in between what was proposed in the initial revision of the 1992 Constitution and what was proposed in April 1992 Ukrainian law on the status of the Republic.

On 21 May 1992 the Supreme Soviet of Russia declared 1954 transfer of Crimea as having "no legal force", because it was adopted "in violation of the Constitution (Fundamental Law) of the Russian SFSR and legislative process", but because subsequent legislation and the 1990 Russo-Ukrainian treaty constituted that fact, parliament considered it necessary to resolve the Crimean question in negotiations between Ukraine and Russia and on the basis of the popular will of the inhabitants of Crimea.[8] A similar resolution was adopted for Sevastopol a year later. Both moves were condemned by Ukraine[9][10][11] and resulted in no changes to the Russian Constitution (neither 1978 nor 1993 documents enumerated Crimea and Sevastopol as federal subjects).

In 1994, after parliamentary and presidential elections in the Republic, the Supreme Council and the executive became dominated by the Russian Bloc (which had won 57 seats in the Supreme Council of Crimea and Presidency for its member, Yuri Meshkov).[12] Following a referendum, held in same year, the Supreme Council of Crimea restored the 1992 Constitution to its original revision,[13] but a year later this constitution, along with the presidency and regional citizenship, was declared null and void by the Ukrainian Parliament, which by that time, had renamed the autonomy from "Republic of Crimea" to Autonomous Republic of Crimea.[14] Another Constitution was passed by Crimean parliament in 1995,[15] but many parts of it were rejected by the Ukrainian parliament; among them were Republic's name (which was to remain "Republic of Crimea") and citizenship.[16] Meanwhile, during drafting of the new Ukrainian Constitution, the question of autonomy was much debated: some legislators proposed abolishing it altogether (downgrading back to oblast status or to autonomy but not autonomous republic),[17][18] while other legislators proposed legalising the 1992 Constitution of Crimea provisions (original May revision) in the new Ukrainian Constitution.[17] Ultimately, the new Constitution of Ukraine adopted neither extreme and reiterated the autonomous status of the republic, while downgrading some of its powers (such as regional Supreme Council's powers to enact legislation in form of laws ("zakoni")). The Republic was declared to be the "Autonomous Republic of Crimea", but also an "inseparable constituent part of Ukraine".[19] A new Crimean constitution, complying with provisions of the Ukrainian one, was adopted in 1998.

Before the 1954 transfer of Crimea, Sevastopol was elevated into a "city of republican subordination" of the Russian SFSR (a predecessor[20] of modern status of "city of federal importance"). Nevertheless, in practice it was still governed as a part of Crimean Oblast (for example, inhabitants of Sevastopol elected deputies into Crimean Oblast Council,[21][22] all its structures, such as local militsiya departments, etc., were subordinated to oblast structures[23]) and therefore was practically transferred too. The Ukrainian Constitution of 1978 listed Sevastopol as one of its "cities of republican subordination" (along with Kyiv),[24] whilst the Russian constitution of the same year didn't list Sevastopol as such.[25] In 1993, the Supreme Soviet of the Russian Federation issued a resolution, which "confirms Russian federal status of Sevastopol" and requested a parliamentary commission to prepare and present to Congress of People's Deputies of Russia corresponding constitutional amendments, but 1993 Russian constitutional crisis prevented that from happening and initial revisions of the Constitution of Russia, adopted on 12 December 1993, did not list Sevastopol as a federal subject. Three years later, the State Duma declared that Russia has a right to exercise sovereignty over Sevastopol,[26] but this resolution went without any actual effect. An agreement was concluded in 1997 by the Russian and Ukrainian governments, allowing the Black Sea Fleet to stay in Sevastopol until 2017 (later extended by another 25 years until 2042, with possible option to extend this period until 2047).

Further information: Crimean referendum, 2014 and Annexation of Crimea by the Russian Federation

Only Russia and six other nations have recognized all these events—namely Afghanistan, Cuba, Nicaragua, North Korea, Syria, and Venezuela.[27][28][29][30][31]

The lack of recognition from Ukraine and the international community is based primarily on the fact that the referendum included an option to join Russia while the region was under military occupation by Russia itself. The European Union, United States, Canada and several other nations condemned the decision to hold a referendum. In addition, the Mejlis of the Crimean Tatar People—the unofficial political association of the Crimean Tatars—called for a boycott of the referendum.[32][33]

The UN General Assembly eventually adopted a non-binding resolution considering the referendum as invalid and reaffirming Ukraine’s territorial integrity by a vote of 100 to 11 with 58 abstentions and 24 absent.[34][35]

Results of the United Nations General Assembly vote about the territorial integrity of Ukraine.
In favor   Against   Abstentions   Absent

Russia recognized the short-lived Republic of Crimea as a country shortly before concluding the aforementioned treaty of accession, which was approved by the Constitutional Court of Russia.

Russia claims the Republic of Crimea (country) as a federal district, the Crimean Federal District, on the grounds of historical control of the area and the local population's right to self-determination.[36]

The First Yatsenyuk Government of Ukraine, along with most of the sovereign states in the world,[37] did not recognize the Republic of Crimea's claim to sovereignty, nor the unification of the Autonomous Republic of Crimea with Sevastopol, nor the referendum that paved the way for Crimean secession. 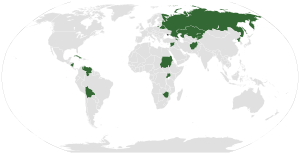 The following members of the United Nations have made statements about their recognition of the Republic of Crimea and Sevastopol as federal subjects of Russia:

The position of Belarus is vague. It includes comments by Belarusian president Alexander Lukashenko who said "Ukraine should remain an integral, indivisible, non-aligned state" and "As for Crimea, I do not like it when the integrity and independence of a country are broken", on the one hand, and "Today Crimea is part of the Russian Federation. No matter whether you recognize it or not, the fact remains." and "Whether Crimea will be recognized as a region of the Russian Federation de-jure does not really matter", on the other hand.[40]

The following non-members of the United Nations have made statements about their recognition of the Republic of Crimea and Sevastopol as federal subjects of Russia:

The majority of the international community, however, have not recognized the Republic of Crimea and Sevastopol as part of Russia. Most nations located in North America, Europe, Oceania, and Central America, as well as some in Southeast Asia and Africa, have openly rejected the referendum and the accession, and instead consider Crimea and Sevastopol to be administrative divisions of Ukraine. The remainder have largely remained neutral. The vote on United Nations General Assembly Resolution 68/262 (supporting the position that Crimea and Sevastopol remain part of Ukraine) was 100 to 11 in favor, with 58 states abstaining. The remaining 24 of the 193 member states were absent when the vote took place. The 100 states voting in favor represented about 34% of the world's population, the 11 against represented about 4.5%, the 58 abstentions represented about 58%, and the 24 absents represented about 3.5%. In Dec 2014, A leader from Crimea, Sergey Aksyonov, accompanied the Russian Trade delegation on a trip to India. India, which observes a policy of non-intervention, has refrained from criticizing Moscow's takeover of Crimea.[44]

Argentina had abstained from the United Nations General Assembly vote about the territorial integrity of Ukraine referring to some governments' lack of coherence on similar questions.[45] President Cristina Fernández criticized what she called a double standard allowing the Falklands residents to hold a vote on their future, while condemning the Crimean referendum on union with Russia.[46][47]

Israel, on April 13, 2014, the Israeli newspaper Haaretz suggested in an unconfirmed report that unnamed officials in Washington were not satisfied with Israel's position regarding Crimea's accession by Russia. A senior Israeli official said that Israel's absence from the United Nations General Assembly vote about the territorial integrity of Ukraine was viewed around the world as an extremely irregular measure, a departure from a long-standing Israeli policy of voting with the United States in the UN.[48]

South Africa abstained from the United Nations General Assembly vote about the territorial integrity of Ukraine because it believes the crisis did not start with the Crimean referendum. Spokesperson Clayson Monyela told SABC News that the initiative fails to encourage dialogue and therefore viewed the UN vote as counterproductive.[49][50]