This article is about political groups and tendencies in Oklahoma. For information on the political and administrative structures (executive, legislative and judiciary) of Oklahoma, see Government of Oklahoma.

Oklahoma is categorized politically as conservative. The state has a history of Democratic dominance. Oklahoma came into being as a state at the height of the era of Jim Crow Laws and had a large Ku Klux Klan presence in the 1920s. Race politics gave way to Democratic political infighting over the New Deal in the 1930s and 1940s and the gradual growth of the Oklahoma Republican Party's power. Today, Oklahoma's federal representation and statewide offices are all held by the Republican Party, which also holds supermajorities in both chambers of the state Legislature. However, with 8.6% Native Americans in the state, it is also worth noting that most Native American precincts vote Democratic in margins exceeded only by African Americans.[1]

Until 1964, Oklahoma was considered a "swing state" in American politics, shifting back and forth in its support for the two major parties. This was in part due to Oklahoma's situation both as a part of the Great Plains states, which tended to be reliably Republican, and adjacent to the South, which was heavily Democratic at that time. The Republican candidate has carried Oklahoma in every presidential election since 1968, often by large margins. However, Oklahoma voters would split their political allegiances (electing Democrats for local government, but Republicans for national office). In general, Oklahoma can be characterized as a politically conservative state.

Oklahoma politics from statehood through World War I was dominated by the Democratic Party, with the Republican Party and the Socialist Party vying to challenge the Democratic Party's dominance. The 2nd Oklahoma Legislature included Oklahoma's first black member, Republican A. C. Hamlin, but passed legislation that made it nearly impossible for African-Americans and seek elective office, which limited him to one term.[2] In the 1910s, the Oklahoma Legislature included Socialists, but the only bill they sponsored that became law involved hunting.[3] Socialists were also elected to local office and received the nation's highest vote count per capita for the party's candidate, Eugene V. Debs in 1916. The Jim Crow Law in Oklahoma was struck down by the United States Supreme Court, but a special session was called by the Democratic governor and focused on voting laws that limited black voter participation.[3] The Ku Klux Klan and the civil rights struggles of the World War I era came to Oklahoma in the 1920s, leading to the Tulsa race riot, lynchings and other violence.[4] Following the practical destruction of the Socialist party in the aftermath of the Green Corn Rebellion, state politics became a two-party system that continued to exclude black voters.

At the U.S. Presidential level, Oklahoma's electoral college vote was a reliable part of Franklin D. Roosevelt's "New Deal" coalition (which began in the U.S. election of 1932). Oklahoma did support President Eisenhower in 1952 and 1956, but then returned to supporting the Democrats in 1964 (Oklahoma split its electoral college vote Nixon-Byrd 7-1, due to a maverick elector, commonly referred to as faithless elector in 1960).

During this same period, Oklahoma's Governors, legislature, and delegation to Congress continued to be dominated by the Democratic Party. However, there was political infighting over deficit spending in the late 1930s, leading to a successful bipartisan push for a 1941 constitutional amendment requiring legislators to pass a balanced budget.[5] Leon C. Phillips, who opposed New Deal programs, rose to prominence, first as Speaker of the Oklahoma House of Representatives and later as governor.[6] 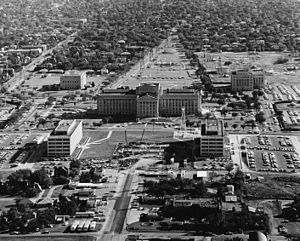 During the presidential campaign in 1968, Oklahoma was targeted by the Republican Party to be included in what was called the Southern Strategy. Beginning with the second Presidential campaign of Richard Nixon (who appealed to Oklahoma voters on the issue of law and order), Oklahoma gradually changed in its voting pattern in national elections to become an increasingly reliable Republican state for presidential tickets. President George W. Bush carried Oklahoma twice (by a wide margin), in 2000 and 2004, for example. In 2004, every Oklahoma county voted for President George W. Bush over Senator John Kerry. In 2008, Oklahoma was the only state in which every county was carried by John McCain.

Gradually, the success of the Republican Party began to translate into Congressional, legislative, and other local political races.

By the start of the 21st century, conservative Republicans increased their strength in Oklahoma on the statewide level, but Democrats were still a major factor in statewide politics.

This began to change in 2004, when the Republicans took control of the state House for only the second time ever, and the first time since 1921. In 2006, the incumbent Democratic governor won re-election by 66% over a former Republican Congressman, winning the popular vote in every county except the three in the strongly Republican Oklahoma Panhandle. Despite the landslide victory for the Democrats, the Republicans gained two seats in the State Senate (resulting in a 24-24 tie, though the Democratic Party held the tie-breaking Lieutenant Governor's vote) and increased their lead in the house of 57-44.

In 2008, the Republicans gained two state senate seats, taking control (26-22) of that chamber for the first time in state history, while increasing their membership in the state house to a 61-40 advantage. The Republicans thus had complete control of the state legislature for the first time ever. In addition Oklahoma was the only state where John McCain carried a majority in every county (even though Democrats still have a majority of registered voters).[7]

The 2010 statewide election saw a historic sweep – for the first time in Oklahoma history the GOP won every statewide office up for election that year, and as a result currently holds the eleven statewide offices. The GOP increased its majorities in the House by six seats and in the Senate by five seats.[8] (One seat, State Senate District 47, was vacant, as incumbent Todd Lamb was elected Lieutenant Governor, and was filled by special election in January 2011.) The Republicans thus had complete control of state government for the first time ever. On the Congressional front, Tom Coburn held his United States Senate seat and the GOP maintained control of the four House seats it held, and came within 6 points of taking Oklahoma's 2nd congressional district (the only Oklahoman Congressional seat not held by the GOP).

In the 2012 statewide election, the GOP captured the 2nd District seat, and thus held every statewide office as well as the entire Congressional delegation. The GOP also increased its majorities in the Oklahoma Legislature by four seats in the Oklahoma House of Representatives for a total of 71 seats and one in the Oklahoma Senate for a total of 32 seats. In both cases, the GOP gained a supermajority. The 2014 statewide election saw the GOP maintain its hold of all the statewide and Congressional seats (all five House seats and, due to both James Inhofe's seat being up for re-election and Tom Coburn resigning his seat mid-term, both Senate seats), its hold of its 71 seats in the House, and increase its Senate bloc to 39 seats.

As in the national government of the United States, power in Oklahoma is divided into three main branches: executive, legislative, and judicial.

The capital of the state is Oklahoma City and the Governor of Oklahoma is Mary Fallin, a Republican. Her first term began on January 10, 2011. The current Lieutenant Governor of Oklahoma is Republican Todd Lamb. Lamb concurrently serves, by virtue of his office as lieutenant governor, as the president of the Oklahoma Senate. The offices of the governor and lieutenant governor have four-year terms. The Governor is assisted by a Cabinet consisting of the assembled heads of the various executive departments called Secretaries. Of the Secretaries, the highest in rank is Secretary of State, currently Glenn Coffee, a Republican, who is the only appointed executive office set out under the Oklahoma Constitution.

Other statewide executive offices are contested in elections and serving four-year terms that run concurrent with that of the Governor, with the exception of the three members of the Oklahoma Corporation Commission. Those members serve staggered six-year terms, with one member's term up for election every two years. 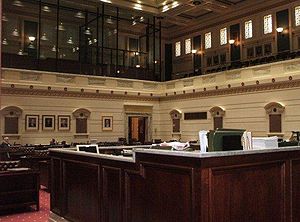 Chamber of the Oklahoma Senate

The state legislature is a bicameral body consisting of the Oklahoma Senate and Oklahoma House of Representatives, with members elected directly by the people. There are 48 state senators, each serving a staggered four-year term and 101 members of the Oklahoma House of Representatives, each serving a two-year term. Members of both houses are elected from single member districts of equal population.

The state has term limits for their legislature that restrict any one person to a total of twelve years service in both the House and Senate.

The Oklahoma House of Representatives

The Oklahoma House of Representatives

The Judiciary of Oklahoma has six levels. Most cases start in the district courts, which are courts of general jurisdiction. The lowest level courts are the Municipal Courts which exist to oversee the administration of justice within cities and have jurisdiction only over the violation of city ordinances. Appeals from Municipal Courts are heard by District Courts. There are 77 District Courts, with each having either a single or multiple District Judges with at least one Associate District Judge to administer justice. Appeals from the District Courts and challenges to certain governmental decisions are heard by either the Oklahoma Court of Civil Appeals for civil appeals or the Oklahoma Court of Criminal Appeals for criminal appeals. The Court of Civil Appeals has twelve judges who sit in two-judge divisions and the Court of Criminal Appeals has five judges.

Two specialized courts within administrative agencies have been established, the Court of Tax Review hears disputes involving illegal taxes levied by county and city governments, and the Workers’ Compensation Court.

The nine-justice Oklahoma Supreme Court is the court of last resort for all civil appeals. The Court has appellate jurisdiction on all civil issues, the Court of Civil Appeals, the Court of Tax Review and the Worker's Compensation Court. The Court only has original jurisdiction when new first impression issues, or important issues of law, or matters of great public interest are at stake.

Within the Oklahoma court system there are two independent courts: the Oklahoma Court on the Judiciary which monitors the actions of all judges and justices and the Oklahoma Court of Impeachment, which is the Oklahoma Senate sitting, which acts serves as the only court that can remove the highest levels of state government officials from their offices. 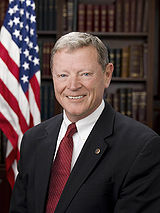 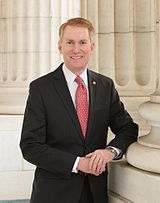 Oklahoma currently has five congressional districts. There were 6th, 7th, and 8th districts, as many as three at-large districts, but they have been eliminated.

The Oklahoma delegation of the United States House of Representatives currently includes five members. Oklahoma's 1st congressional district covers the northeastern corner of the state and it borders Kansas to the north. It is represented by Jim Bridenstine, a Republican.

Oklahoma's 2nd congressional district covers (approximately) the eastern one-fourth of the state, bordering Kansas to the north, Missouri and Arkansas to the east, and Texas along the Red River to the south. It is represented by Markwayne Mullin, a Republican.

Oklahoma's 3rd congressional district covers western Oklahoma and borders New Mexico to the west, Colorado and Kansas to the north, and the Texas panhandle to the south. It is represented by Frank Lucas, a Republican.

Oklahoma's 4th congressional district covers south-central Oklahoma and borders Texas along the Red River to the south. It is represented by Tom Cole, a Republican.

In presidential elections, Oklahoma has consistently voted for Republican candidates since 1968.