This article is about the OF-5 rank Polkovnik in Slavophone countries. For the equivalent rank in Anglophone armed forces see Colonel; in Austria and Germany see Oberst. 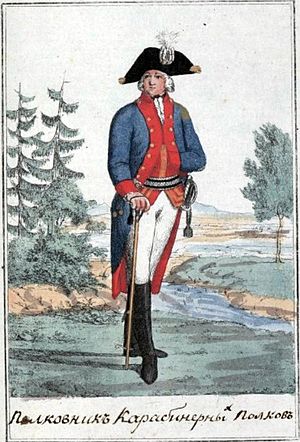 Polkovnik of the Russian Empire (1793) 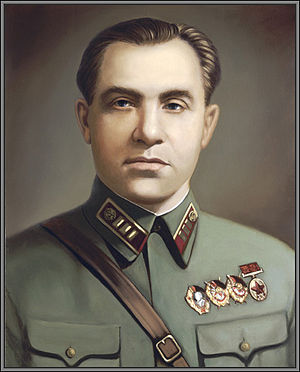 Polkovnik (Russian: полковник, Bulgarian: полковник, Polish: pułkownik, Ukrainian: полковник, Belarusian: палкоўнік, Czech: plukovník, Lithuanian: pulkininkas, Latvian: pulkvedis; literally "regimentary") is often a military rank in Slavic countries which corresponds to a colonel in English-speaking states. However, in Cossack Hetmanate (Гетманщина, Гетьманщина, Getmanshchina) and Slobozhanshchyna, polkovnyk was an administrative rank similar to a governor. Usually this word is translated as colonel, however the transliteration is also in common usage, for the sake of the historical and social context.

The exact name of this rank maintains a variety of spellings in different languages, but all descendant from the Old Slavonic word polk (literal: regiment (sized unit)), and include the following:

Although Georgia, Latvia and Lithuania are not Slavic countries, they have been heavily influenced by Slavonic cultures due to their common Eastern European heritage and history - just as the Baltic nations have significantly influenced the North Slavs.

Polkovnik began as a commander of a distinct group of troops, Old Slavonic polk (полк), arranged for a particular battle.

In the 17th century, polkovnik became the position of a regimental commander of the streltsy; this position also made it into New Regiments of the streltsy and later into the new army of Peter the Great. The rank was legalized by Table of Ranks that placed it in the 6th grade as the second-top field officer, right under the brigadier. A promotion to the rank of polkovnik gave a privilege of hereditary nobility.

The Red Army reintroduced the polkovnik rank in 1935, together with a number of other former Russian ranks, and it has been used in many ex-USSR countries, including Russia, to the present day.

The Rank insignia to Polkovnik (OF-5) is as follows:

The rank was first introduced in the Polish Army in the 17th century to denote a captain (rotmistrz) of the core banner of a regiment. By the end of the 17th century, the title of the assignment became a de facto rank as such and started to denote the commanding officer of the entire regiment. In mercenary troops fighting in the ranks of the Polish-Lithuanian Commonwealth's army, the direct equivalent of the rank of pułkownik was oberszter, but in the 18th century the rank was abolished and renamed as pułkownik as well. During the rule of Sanacja in the period between World War I and World War II, a large number of officers were promoted to the rank, often for political reasons (the rule of Sanacja was even dubbed the government of the colonels because of that). During the Invasion of Poland in 1939, the Polish divisions were commanded by officers of many grades, from colonels to three-star generals. In fact 22 divisions out of 42 were commanded by colonels in 1939. The pułkownicy (plural of pułkownik) also commanded units of all sizes, from divisions down to mere battalions. 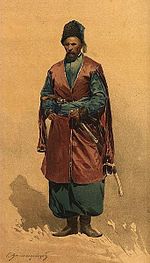 Cossack Polkovnik of a registered regiment from the left-bank Ukraine

In the Zaporozhian Host, the political, social, and military organization of Ukrainian cossacks, the title polkovnyk indicated a high military rank among the Ukrainian Cossack starshyna (officers); a polkovnyk commanded one or more military detachments during land and naval military actions in the 16th to 18th centuries. In the 18th century, a polkovnyk was a leader of a palanka, a territorial unit of the Zaporozhian Host. The military council elected a palanka polkovnyk to serve for a term of one year. He represented the Kosh Otaman in the palanka and had significant powers, including the right to condemn Cossacks to the death penalty. At the time of liquidation of the Zaporozhian Host by the Russian government in 1775, there were eight palanka polkovnyks. As symbol of office a polkovnyk wore a pernach (a mace with a hexagonal head; see also bulawa) in his belt.

In the Registered Cossack Army of the Polish-Lithuanian Commonwealth in the 16th and 17th centuries, a polkovnyk commanded a regiment (полк. polk), a Cossack military unit. After the reform of the Cossack army by hetman Mykhailo Doroshenko in the 1620s there were six Cossack regiments, each comprising one thousand Cossacks. Polkovnyks were elected by the Cossack Council (рада, rada) subject to the approval of the Polish government. A polkovnyk obtained a salary for his service, and enjoyed considerable privileges. After the Sejm of the Polish-Lithuanian Commonwealth adopted the "Ordination" of 1638, only noblemen (szlachta) were allowed to become polkovnyks.

In modern Ukraine, the military rank of polkovnyk resembles the similar rank of the former Soviet Army.

In the film The Eagle Has Landed, Michael Caine wears the uniform and insignia of a pulkownik while in secret being an oberst in the German Luftwaffe.