From Infogalactic: the planetary knowledge core
Jump to: navigation, search
For other uses, see Poltava (disambiguation).

Poltava (Ukrainian and Russian: Полта́ва, Ukrainian pronunciation: [polˈtɑwɑ]) is a city located on the Vorskla River in central Ukraine. It is the administrative center of the Poltava Oblast (province), as well as the surrounding Poltava Raion (district) of the oblast. Poltava's estimated population is 296,760 (as of 2013).

It is still unknown when Poltava was founded, although the town was not attested before 1174. However, for reasons unknown, municipal authorities chose to celebrate the city's 1100th anniversary in 1999. The settlement is indeed an old one, as archeologists unearthed a Paleolithic dwelling as well as Scythian remains within the city limits.

The present name of the city is traditionally connected to the settlement Ltava which is mentioned in the Hypatian Chronicle in 1174. The region belonged to the Grand Duchy of Lithuania from the 14th century. The Polish administration took over in 1569. In 1648, Poltava was captured by the Ruthenian-Polish magnate Jeremi Wiśniowiecki (1612–51). Poltava was the base of a distinguished regiment of the Ukrainian Cossacks, and served as a Cossack stronghold during the Khmelnytsky Uprising. After the pro-Polish hetman Ivan Vyhovsky came to power and a civil war broke out, in 1658 Poltava, under polkovnyk Martyn Pushkar, was the leading town of the rebels. However, it was ultimately burned down and pillaged by Vyhovsky's troops, while many of its women and children were enslaved by the Crimean Tatars. In 1667 the city passed to the Russian Empire.

In the Battle of Poltava on 27 June 1709 (Old Style), or 8 July (New Style), Tsar Peter I, commanding 34,000 troops, defeated a Swedish army of 17,000 troops led by Field Marshal Carl Gustav Rehnskiöld (who had received the command of the army after the wounding of the Swedish king Carl XII on 17 June). The battle marked the end of the Swedish Empire and the rise of the Russian Empire.

In 1775, Poltava's Monastery of the Exaltation of the Cross (Russian: Крестовоздвиженский монастырь, Krestovozdvizhensky Monastyr) became the seat of bishops of the newly created Eparchy (Diocese) of Slaviansk and Kherson. This large new diocese included the lands of the Novorossiya Governorate and Azov Governorate north of the Black Sea. Since much of that area had been only recently conquered by Russia from the Ottoman Empire, and a large number of Orthodox Greek settlers had been invited to settle in the region, the Imperial Government selected a renowned Greek scholar, Eugenios Voulgaris to preside over the new diocese. After his retirement in 1779, he was replaced by another Greek theologian, Nikephoros Theotokis.[1][2]

In World War II, the Wehrmacht occupied Poltava from late October 1941 until 23 September 1943, when it was retaken during the Lower Dnieper Offensive. By the summer of 1944 the USAAF conducted a number of shuttle bombing raids against the Third Reich under the name of Operation Frantic. Poltava Air Base, as well as Mirgorod Airport, were used as eastern locations for landing B-17 Flying Fortress heavy bombers involved in those operations. 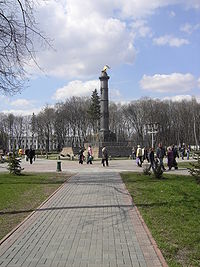 The Column of Glory commemorates the centenary of the Battle of Poltava (1709). 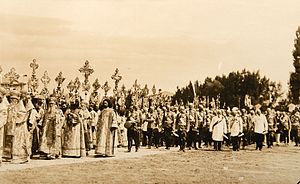 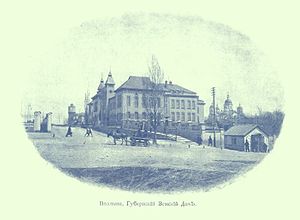 Building of the regional administration (by Vasyl Krychevsky) 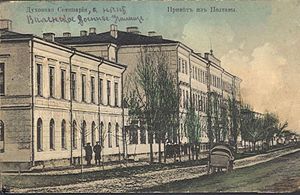 Theological seminary, which during the World War I was converted into a military school quartering the Vilno Cadet School

Poltava's government consists of the 50-member Poltava City Council (Ukrainian: Полтавська Міська рада) which is headed by the Secretary (currently Oleksandr Kozub). The city's current mayor is Oleksandr Mamay, who was sworn in on 4 November 2010 after being elected with more than 61 percent of the vote.[5] In 2015 he was re-elected as a candidate of Conscience of Ukraine with 62.9% in a second round of Mayoral election.[6]

The territory of Poltava is divided into 3 administrative raions (districts):[7]

The village of Rozsoshentsi, Scherbani, Tereshky, Kopyly and Suprunivka are officially considered to be outside the city, but actually constitute a part of the Poltava agglomeration.

Poltava's transportation infrastructure consists of two major train stations with railway links to Kiev, Kharkiv, and Kremenchuk. Poltava's Kiev line is electrified and is used by the Poltava Express. The electrification of the Poltava-Kharkiv line was completed in August 2008.[12]

The Avtovokzal serves as the city's intercity bus station. Buses for local municipal routes depart from "AC-2" (autostation No. 2 – along Shevchenko street) and "AC-3" (Zinkivska street). Local municipal routes are parked along the Taras Shevchenko Street. Marshrutka minibuses serve areas where regular bus access is unavailable; however, they are privately owned and cost more per ride. In addition, a 15-route trolleybus network of 72.6 kilometres (45.1 mi) runs throughout the city.

Poltava is also served by a domestic airport, situated outside the city limits near the village of Ivashky. The international highway M03, linking Poltava with Kiev and Kharkiv, passes through the southern outskirts of the city. There is also a regional highway P-17 crossing Poltava and linking it with Kremenchuk and Sumy.[13]

Poltava has always been one of the most important science and education centres in Ukraine. Major universities and institutions of higher education include the following: 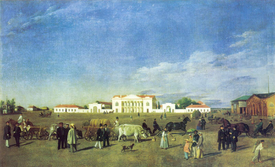 The centre of the old city is a semicircular Neoclassical square with the Tuscan column of cast iron (1805–11), commemorating the centenary of the Battle of Poltava and featuring 18 Swedish cannons captured in that battle. As Peter the Great celebrated his victory in the Saviour church, this 17th-century wooden shrine was carefully preserved to this day. The five-domed city cathedral, dedicated to the Exaltation of the Cross, is a superb monument of Cossack Baroque, built between 1699 and 1709. As a whole, the cathedral presents a unity which even the Neoclassical belltower has failed to mar. Another frothy Baroque church, dedicated to the Dormition of the Theotokos, was destroyed in 1934 and rebuilt in the 1990s.

A minor planet 2983 Poltava discovered in 1981 by Soviet astronomer Nikolai Stepanovich Chernykh is named after the city.[14]

The most popular sport is football(soccer). Two professional football(soccer) teams are based in the city: Vorskla Poltava in the Ukrainian Premier League and FC Poltava in the Second League. There are 3 stadiums in Poltava: Butovsky Vorskla Stadium (main city stadium), Dynamo Stadium are situated in the city centre and Lokomotiv Stadium which is situated in Podil district.

Famous people from Poltava and its region 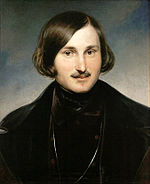 Poltava is twinned with: