From Infogalactic: the planetary knowledge core
Jump to: navigation, search
For other uses, see Poltergeist (disambiguation). 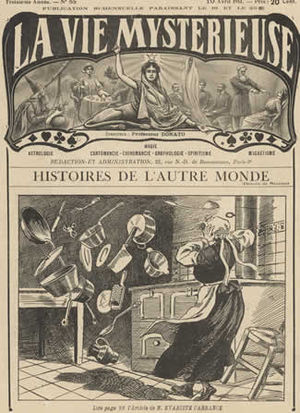 Artist conception of poltergeist activity claimed by Therese Selles, a 15-year-old domestic servant of the Todescini family at Cheragas, Algeria. From the French magazine La Vie Mysterieuse in 1911.

In folklore and parapsychology, a poltergeist (German for "rumbling ghost") is a type of ghost or other supernatural being supposedly responsible for physical disturbances, such as loud noises and objects being moved or destroyed. Most accounts of poltergeists describe movement or levitation of objects, such as furniture and cutlery, or noises such as knocking on doors. Poltergeists are purportedly capable of pinching, biting, hitting and tripping people.

Poltergeists occupy numerous niches in cultural folklore, and have traditionally been described as troublesome spirits who haunt a particular person instead of a specific location. Such alleged poltergeist manifestations have been reported in many cultures and countries including the United States, Japan, Brazil, Australia, and most European nations, with early accounts dating back to the 1st century. The first reported poltergeist was in Germany in 856 AD.[1]

The word poltergeist came from the German language words poltern ("to make sound" and "to rumble") and Geist ("ghost" and "spirit"), and the term itself translates as "noisy ghost", "rumble-ghost" or a "loud spirit"

"In the typical poltergeist outbreak, small objects are hurled through the air by unseen forces, furniture is overturned, or other disturbances occur -- usually just what could be accomplished by a juvenile trickster determined to plague credulous adults."

Nickell writes that reports are often exaggerated by credulous witnesses.[4]

"Time and again in other “poltergeist” outbreaks, witnesses have reported an object leaping from its resting place supposedly on its own, when it is likely that the perpetrator had secretly obtained the object sometime earlier and waited for an opportunity to fling it, even from outside the room—thus supposedly proving he or she was innocent."

According to research in anomalistic psychology claims of poltergeist activity can be explained by psychological factors such as illusion, memory lapses and wishful thinking.[5] A study (Lange and Houran, 1998) wrote that poltergeist experiences are delusions "resulting from the affective and cognitive dynamics of percipients' interpretation of ambiguous stimuli".[6]

Attempts have also been made to explain scientifically poltergeist disturbances that have not been traced to fraud or psychological factors. Skeptic and magician Milbourne Christopher found that some cases of poltergeist activity can be attributed to unusual air currents, such as a 1957 case on Cape Cod where downdrafts from an uncovered chimney became strong enough to blow a mirror off of a wall, overturn chairs and knock things off shelves.[7]

In the 1950s, Guy William Lambert proposed that reported poltergeist phenomena could be explained by the movement of underground water causing stress on houses.[8] He suggested that water turbulence could cause strange sounds or structural movement of the property, possibly causing the house to vibrate and move objects. Later researchers, such as Alan Gauld and Tony Cornell, tested Lambert's hypothesis by placing specific objects in different rooms and subjecting the house to strong mechanical vibrations.[8] They discovered that although the structure of the building had been damaged, only a few of the objects moved a very short distance. The skeptic Trevor H. Hall criticized the hypothesis claiming if it was true "the building would almost certainly fall into ruins."[9] According to Richard Wiseman the hypothesis has not held up to scrutiny.[8]

Michael Persinger has theorized that seismic activity could cause poltergeist phenomena.[10] However, Persinger's claims regarding the effects of environmental geomagnetic activity on paranormal experiences have not been independently replicated and, like his findings regarding the God helmet, may simply be explained by the suggestibility of participants.[11][12]

David Turner, a retired physical chemist, suggested that ball lightning might cause the "spooky movement of objects blamed on poltergeists."[13]

Parapsychologists such as Nandor Fodor and William Roll wrote that poltergeist activity can be explained by psychokinesis.[14][15]

Poltergeist activity has often been believed to be the work of malicious spirits. According to Allan Kardec, the founder of Spiritism, poltergeists are manifestations of disembodied spirits of low level, belonging to the sixth class of the third order. They are believed to be closely associated with the elements (fire, air, water, earth).[16]