From Infogalactic: the planetary knowledge core
Jump to: navigation, search
"Renaissance man" redirects here. For use as a title of cultural works, see Renaissance Man.
For other uses, see Polymath (disambiguation). 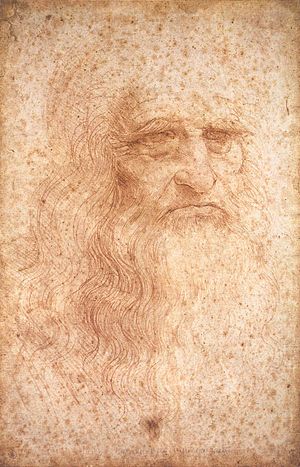 Leonardo da Vinci, a polymath of the Renaissance era.

A polymath (Greek: πολυμαθής, polymathēs, "having learned much")[1] is a person whose expertise spans a significant number of different subject areas; such a person is known to draw on complex bodies of knowledge to solve specific problems. The term was first used in the 17th century; the related term, polyhistor, is an ancient term with similar meaning.[2]

The term is often used to describe great thinkers of the Renaissance and the Enlightenment who excelled at several fields in science and the arts. In the Italian Renaissance, the idea of the polymath was expressed by Leon Battista Alberti (1404–1472), in the statement that "a man can do all things if he will".[3] Embodying a basic tenet of Renaissance humanism that humans are limitless in their capacity for development, the concept led to the notion that people should embrace all knowledge and develop their capacities as fully as possible. This was expressed in the term "Renaissance man" which is often applied to the gifted people of that age who sought to develop their abilities in all areas of accomplishment: intellectual, artistic, social and physical. This term entered the lexicon during the twentieth century and has now been applied to great thinkers living before and after the Renaissance. 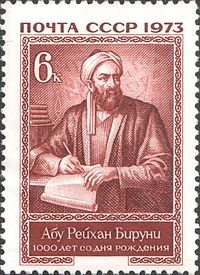 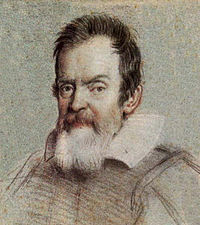 Galileo was one of the most influential polymaths.

"Renaissance man" was first recorded in written English in the early 20th century.[4] It is now used to refer to great thinkers living before, during, or after the Renaissance. Leonardo da Vinci has often been described as the archetype of the Renaissance man, a man of "unquenchable curiosity" and "feverishly inventive imagination".[5]

Many notable polymaths lived during the Renaissance period, a cultural movement that spanned roughly the 14th through to the 17th century and that began in Italy in the late Middle Ages and later spread to the rest of Europe. These polymaths had a rounded approach to education that reflected the ideals of the humanists of the time. A gentleman or courtier of that era was expected to speak several languages, play a musical instrument, write poetry, and so on, thus fulfilling the Renaissance ideal. The idea of a universal education was essential to achieving polymath ability, hence the word university was used to describe a seat of learning. At this time universities did not specialize in specific areas but rather trained students in a broad array of science, philosophy, and theology. This universal education gave them a grounding from which they could continue into apprenticeship toward becoming a Master of a specific field.

When someone is called a "Renaissance man" or "Renaissance woman" today, it is meant that, rather than simply having broad interests or superficial knowledge in several fields, he or she possesses a more profound knowledge and a proficiency, or even an expertise, in at least some of those fields.[6] Some dictionaries use the term "Renaissance man" to describe someone with many interests or talents,[7] while others give a meaning restricted to the Renaissance and more closely related to Renaissance ideals.

Aside from "Renaissance man" as mentioned above, similar terms in use are Homo Universalis (Latin) and Uomo Universale (Italian), which translate to "universal person" or "universal man". The related term generalist – contrasted with a specialist – is used to describe a person with a general approach to knowledge. 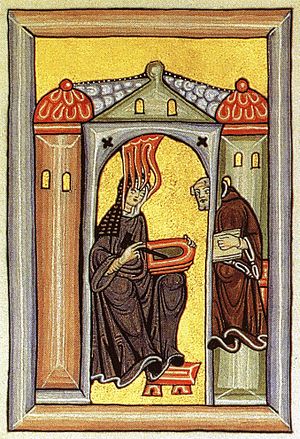 Medieval German polymath Hildegard of Bingen, shown dictating to her scribe in an illumination from Liber Scivias

The term Universal Genius is also used, with Leonardo da Vinci as the prime example again. The term seems to be used especially when a person has made lasting contributions in at least one of the fields in which he was actively involved, and when he had a universality of approach.

In Britain, phrases such as "polymath sportsman", "sporting polymath", or simply "polymath" are occasionally used in a restricted sense to refer to athletes who have performed at a high level in several very different sports, rather than to those gifted in many fields of study. One whose accomplishments are limited to athletics would not be considered a "polymath" in the usual sense of the word. An example is Howard Baker, who was called a "sporting polymath" by the Encyclopedia of British Football for winning high jump titles and playing cricket, football, and water polo.[8]