Pomorie (Bulgarian: Поморие) is a town and seaside resort in southeastern Bulgaria, located on a narrow rocky peninsula in Burgas Bay on the southern Bulgarian Black Sea Coast.

It is situated in Burgas Province, 20 km away from the city of Burgas and 18 km from the Sunny Beach resort. The ultrasaline lagoon Lake Pomorie, the northernmost of the Burgas Lakes, lies in the immediate proximity. The town is the administrative centre of the eponymous Pomorie Municipality.

Pomorie is an ancient city and today an important tourist destination. As of December 2009, it has a population of 13,569 inhabitants.[1] It lies at Lua error in Module:Coordinates at line 668: callParserFunction: function "#coordinates" was not found..

Pomorie was founded by the Ancient Greeks under the name Anchialos (Greek: Αγχίαλος), deriving from Ancient Greek "anchi-" ("near, close to") and "als-" (either "salt" or a poetic and uncommon word for "sea"). In Latin, this was rendered as Anchialus. The Bulgars called the town Tuthom, though it's more common name in Bulgarian was Анхиало, Anhialo based on the Greek name. During the Ottoman rule, the town was called Ahyolu. In 1934 the town was renamed to Pomorie, from the Bulgarian "po-" (in this context "by, next to") and "more" ("sea"), corresponding to one of the two etymologies of the original Greek name.

Possibly founded in the 5th or 4th century BC as a colony of Apollonia (today Sozopol), Anchialos was mentioned in Strabo's Geographica as a small town. It was briefly captured by Messembria (Nesebar) in the 2nd century BC, but reconquered by Apollonia and its fortified walls destroyed.

The western Black Sea coast was ultimately conquered by the Romans under Marcus Licinius Crassus in 29-28 BC after continuous campaigns in the area since 72-71. The fortified wall was meanwhile rebuilt, as evidenced by Ovid in 9 AD en route to Tomis. In the early 1st century AD Anchialos was the centre of a strategia of the vassal Odrysian kingdom, and the town had a Thracian population in the 6th century AD according to the early Byzantine historian Procopius. As the Odrysian kingdom's self-independence was abolished in 45 AD, Anchialos became part of the Roman province of Thrace and was formally proclaimed a city under Emperor Trajan. At the time the city controlled a vast territory bordering that of Augusta Trajana (Stara Zagora) and reaching the Tundzha to the west, bordering that of Messembria to the north and the southern shore of Lake Burgas to the south. Anchialos acquired the appearance of a Roman city and throve in the 2nd and 3rd century under the Severan Dynasty, serving as the most important import and export station of Thrace.

However, the invasion of barbarian tribes from the north meant an end to this prosperity in the middle of the 3rd century, with the Goths briefly capturing Anchialos around 270. Diocletian stayed in the city between 28 and 30 October 294. His and Constantine the Great's reforms restored the city's prosperity for a while, as the proximity to the new capital of Constantinople made Anchialos a key food supply centre.

Theodoric the Great passed through the city in 476 on the way to Adrianople. A high-ranking Byzantine general named Vitalian in 513 revolted in the region and briefly took control of Anchialos and the neighbouring cities to use their fleet in his attack of Constantinople until he was crushed in 515. 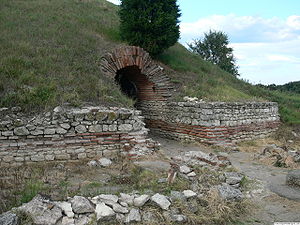 The Slavic and Avar invasion in 584 meant Anchialos was conquered and its fortifications were destroyed. Avar Khagan Bayan turned the city into his residence for a few months and concluded a peace treaty with the Byzantines. At the eve of his campaigns, the emperor Maurice visited the city to oversee reconstruction.

After 681 and the formation of the First Bulgarian Empire to the north Anchialos played an important role in many conflicts between the two empires. In 708 the forces of Justinian II were completely defeated near the fortress by the army of Bulgar Khan Tervel. On 30 June 763 the Bulgars under Telets suffered a defeat by the Byzantine army of Constantine V. On 21 June 766 the same emperor's fleet of 2,600 heavy ships sank en route to Anchialos, where Constantine was waiting, and most soldiers drowned, forcing him to return to Constantinople.

In May 783 Irene undertook a demonstrative campaign across Thrace and restored Anchialos' destroyed fortifications. The city was first conquered by the Bulgarian Empire in 812, under Khan Krum, who settled Slavs and Bulgars in Anchialos. The Byzantines restored their control over the city and the area in 864.

The Battle of Anchialus took place near the city on 20 August 917, and was one of Tsar Simeon the Great's greatest military achievements. Simeon's army routed the considerably larger Byzantine forces under Leo Phocas. Bulgaria retained the city until 971, when the Byzantine Empire reconquered it and held it for two centuries as Bulgaria was subjugated. After the restoration of the Bulgarian state Anchialos changed hands several times until it was captured by the Venetian knights of Amadeus VI, Count of Savoy in October 1366. The next year it was ceded to Byzantium.[7]

After the Ottoman invasion of the Balkans in the 14th century, Anchialos remained a Byzantine bulwark until submission in 1453 together with Constantinople. Whilst under Ottoman administration, it became the centre of a kaza also encompassing the area around Sozopol as "Ahyolu". It was the centre of an eparchy of the Patriarchate of Constantinople and continued to act as a cultural, religious, economic and administrative centre of the region until the early 19th century, as many noble Byzantine families settled after 1453. Two Patriarchs of Constantinople stem from the city—Michael III of Anchialus (1170–1178) and Jeremias II Tranos (1572–1579, 1580–1584, 1587–1595).

Already before 1819 many prominent locals joined the Greek patriotic organization Filiki Eteria. At the outbreak of the Greek War of Independence (1821) a part of the town's representatives, priests as well as the Orthodox bishop Eugenios were executed by the Ottoman authorities.[8] During the Russo-Turkish War of 1828-1829 Anchialos was captured by the Russian forces on 11 July 1829 and held for a year. At the time it was mainly inhabited by Greeks,[9] with minorities of Bulgarians and Turks,[8] had a population of 5,000-6,000, six Orthodox churches and a mosque. After the Russian forces withdrew the whole of what is today Eastern Bulgaria gradually depopulated, with many people fleeing to the Christian lands to the north. Pomorie's St George's Monastery was founded in 1856. It was a kaza centre in İslimye sanjak of Edirne Province before 1878 as "Ahyolu".[10]

Anchialos was liberated from Ottoman rule on 27 January 1878 and became part of Eastern Rumelia as a kaza centre in Burgaz sanjak until Bulgaria unified in 1885. At the turn of the 20th century Anchialos was a predominantly Greek town of about 6,000. In the summer of 1906 it was burned down and over 300 Greeks were murdered during an anti-Greek pogrom conducted by Bulgarian refugees from the region of Macedonia.[11] [12] The town accommodated many Bulgarian refugees from Eastern Thrace, mainly from around Lozengrad after World War I, who replaced the Greeks who had fled in the first decade of the 20th century; in 1906 they founded Nea Anchialos in Greece. During the 19th and 20th century it gradually lost most of its importance in the southern Bulgarian Black Sea Coast at the expense of rapidly developing Burgas. It established itself as a centre of wine and salt production and was renamed Pomorie in 1934. 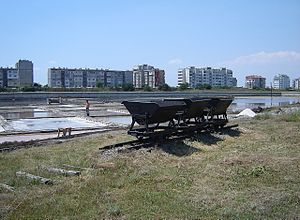 Pomorie Point on Livingston Island in the South Shetland Islands, Antarctica is named after Pomorie.