The Ponary Massacre (Polish: zbrodnia w Ponarach) was the mass murder of up to 100,000 people, mostly Jews, but also Russians, Poles,[1] Lithuanians and others, by German SD, SS and Lithuanian Nazi collaborators,[2][3][4][5] such as the Ypatingasis būrys units,[2][3][6] during World War II and the Holocaust in Reichskommissariat Ostland. The executions took place between July 1941 and August 1944 near the railway station of Ponary, now known as Paneriai, a suburb of what is today Vilnius, Lithuania. Some 70,000 Jews were murdered in Ponary,[7] along with estimated 20,000 or more Poles[1] and 8,000 Russians, many from nearby Vilnius.[2][4][8]

Following the occupation of the Republic of Central Lithuania by the Second Polish Republic, the town of Ponary became part of the Wilno Voivodship (Kresy region). After the Nazi Invasion of Poland in September 1939, the region was taken over by the Soviets and after about a month transferred to Lithuania. After the Soviet annexation of Lithuania in June 1940, the construction of an oil storage facility began near Ponary in conjunction with a military airfield. That project was never completed, and in 1941 the area was occupied by Nazi Germany. The Nazis decided to take advantage of the large pits dug for oil storage tanks to dispose of bodies of unwanted locals. Their policy was to kill every Jewish individual in Lithuania, and the Baltic countries became the first place Nazis would mass execute Jews.[10] Out of 70,000 Jews living in Vilnius, only 7,000 survived the war.[11] 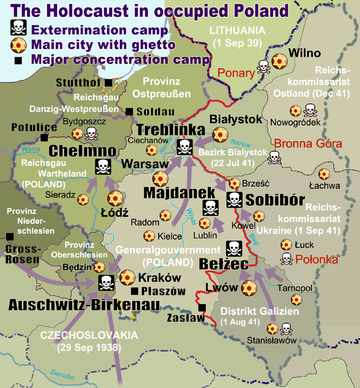 Ponary massacre on the map (in top right corner, marked with a white skull and red letters)

The massacres began in July 1941, when Einsatzkommando 9 arrived in Vilnius, rounded up 5,000 Jewish men of Vilnius and took them to Paneriai where they were shot. Further mass killings, often aided by Lithuanian volunteers from Ypatingasis burys,[11] took place throughout the summer and fall.[6] In September, the Vilna Ghetto was established.[11] By the end of the year, about 21,700 Jews had been killed at Paneriai.[11]

The pace of killings slowed in 1942, as slave workers were appropriated by the Wehrmacht.[11] The total number of victims by the end of 1944 was between 70,000 and 100,000. According to post-war exhumation by the forces of Soviet 2nd Belorussian Front the majority (50,000–70,000) of the victims were Polish and Lithuanian Jews from nearby Polish and Lithuanian cities, while the rest were primarily Poles (about 20,000) and Russians (about 8,000).[2][3] The Polish victims were mostly members of Polish intelligentsia – academics, educators (such as Kazimierz Pelczar, a professor of Stefan Batory University), priests (such as Father Romuald Świrkowski), and members of the Armia Krajowa resistance movement.[3][8] Among the first victims were approximately 7,500 Soviet POWs shot in 1941 soon after Operation Barbarossa begun.[5] At later stages there were also smaller numbers of victims of other nationalities, including local Russians, Romani and Lithuanians, particularly Communist sympathizers and members of General Povilas Plechavičius' Local Lithuanian Detachment who refused to follow German orders.[3]

As Soviet troops advanced in 1943, the Nazi units tried to cover up the crime under the Aktion 1005 directive. Eighty inmates from the nearby Stutthof concentration camp prisoners were formed into Leichenkommando ("corpse units"). The workers were forced to dig up bodies, pile them on wood and burn them. The ashes were then ground up, mixed with sand and buried.[3] After months of this gruesome work, the brigade managed to escape on 19 April 1944. Eleven of the group survived the war; their testimony contributed to revealing the massacre.[citation needed]

Information about the massacre began to spread as early as 1943, due to the activities and works of Helena Pasierbska, Józef Mackiewicz, Kazimierz Sakowicz and others. Nonetheless the Soviet regime, which supported the resettlement of Poles from the Kresy, found it convenient to deny that Poles or Jews were singled out for massacre in Paneriai; the official line was that Paneriai was a site of massacre of Soviet citizens only.[5][12] This led some — including Polish Prime Minister Jerzy Buzek — to compare this to the Katyn massacre.[3] On 22 October 2000, a decade after the fall of communism, in independent Lithuania, an effort by several Polish organizations resulted in raising a monument (a cross) to fallen Polish citizens, during an official ceremony in which representatives of both Polish and Lithuanian governments (Bronisław Komorowski, Polish Minister of Defence, and his Lithuanian counterpart), as well as several NGOs, took place.[3][5][13]

The site of the massacre is commemorated by a memorial to the victims of the Holocaust, a memorial to the Polish victims and a small museum. The executions at Paneriai are currently being investigated by the Gdańsk branch of the Polish Institute of National Remembrance.[2]