Ponca City (Pawnee: Riihitawiruʾ, Riíhitawiru, Riihitáwiru[4]) is a city in Kay and is partly in Osage counties in the U.S. state of Oklahoma, which was named after the Ponca Tribe. Ponca City had a population of 25,387 at the time of the 2010 census. 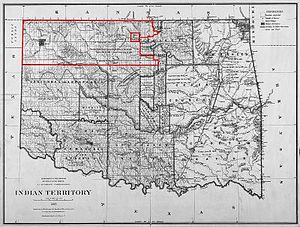 Ponca City was created in 1893 as New Ponca after the United States opened the Cherokee Outlet for European-American settlement during the Cherokee Strip land run, the largest land run in United States history.[1] The site for Ponca City was selected for its proximity to the Arkansas River and the presence of a fresh water spring near the river. The city was laid out by Burton Barnes, who drew up the first survey of the city and sold certificates for the lots he had surveyed. After the drawing for lots in the city was completed, Barnes was elected the city's first mayor.[5]

Another city, Cross, vied with Ponca City to become the leading city in the area. After the Atchison, Topeka and Santa Fe Railway had opened a station in Cross, people thought it would not open another in Ponca City because of the two cities' proximity.[5] New Ponca boosters eventually secured a station after offering the Santa Fe station agent two town lots and the free relocation of his house from Cross.[6] Ponca City reportedly obtained its first boxcar station by some Ponca City supporters going to Cross and returning with the town's station pulled behind them.[5] Cross eventually became defunct. In 1913 New Ponca changed its name to Ponca City.[6]

File:Statue of E. W. Marland.jpg
The statue of oilman E. W. Marland, founder of Marland Oil (later Conoco), who later was elected as a U.S. Congressman and Oklahoma Governor.

Ponca City's history and economy has been shaped chiefly by the ebb and flow of the petroleum industry. E. W. Marland, a Pennsylvania oil man, came to Oklahoma and founded the Marland Oil Company, which once controlled approximately 10 percent of the world's oil reserves.[7] He founded the 101 Ranch Oil Company, located on the Miller Brothers 101 Ranch, and drilled his first successful oil well on land which he leased in 1911 from the Ponca Tribe of American Indians.[8] He was elected in 1932 as a U.S. congressman and in 1934 as governor of Oklahoma.

Marland's exploitation of oil reserves generated growth and wealth that were previously unimaginable on the Oklahoma prairie, and his company virtually built the city from the ground up.[citation needed] Marland and his associates built mansions to display their new wealth, including the Grand Home and the E.W. Marland Estate (once called the Palace on the Prairie.) Because of this period of wealth and affluence, Ponca City has a high concentration of buildings that exemplify the popular Spanish Colonial Revival architecture of the period, as well as art deco-influenced buildings and homes.

The "Roaring 20s" came to an end for Ponca City shortly before the Great Depression. After a successful takeover bid by J.P. Morgan, Jr., son of financier J.P. Morgan, Marland Oil Co. merged with Continental Oil Co. (Conoco) in the late 1920s.[8] It was known as Conoco for more than 70 years. The company maintained its headquarters in Ponca City until 1949 and continued to grow into a global corporation.

During the oil boom years of the 1980s, Conoco was owned by the DuPont Corp., which took control of the company in 1981.[8] After nearly two decades of ownership and an oil bust that crippled Oklahoma's economy in the late 1980s, DuPont sold off its Conoco assets in 1998.[8] In 2002, Conoco had merged with Phillips Petroleum (another major petroleum player with roots in northern Oklahoma) to become ConocoPhillips.[8] ConocoPhillips was then the sixth-largest publicly traded oil company in the world, and the third largest in the United States.[8] It maintains a significant presence in its historic home state.

Since the company has reduced its workforce and facilities in the city, the population has declined steadily since the early 1990s. In February 2009, ConocoPhillips announced that all of its remaining non-refinery operations in Ponca City (representing 750 jobs) would be moved out of the city.[9] The city's recent efforts to grow its economy beyond the petroleum industry have attracted a number of technology, manufacturing and service jobs.[citation needed]

In 2005, ConocoPhillips announced plans to build a $5 million museum across from its Ponca City refinery. Opened to the public in May 2007, the Conoco Museum features artifacts, photographs and other historical items related to the petroleum industry and its culture in northern Oklahoma. A sister museum, Phillips Petroleum Company Museum, will be opened in Bartlesville, Oklahoma. Funded by a private foundation, the Conoco Museum charges no admission fee.

In 2012 ConocoPhillips split into two separate companies, with the upstream portion retaining the ConocoPhillips name and the refining and transportation portions taking the name Phillips66.

Based in Houston, Texas, Phillips66 continues to operate a 200 thousand barrel per day refinery[citation needed] in Ponca City.

Until recently, European Americans' accounts of their settlement and the growth of the oil industry in Ponca City have often overshadowed both the long ancient history of indigenous peoples in the area, as well as those tribes who were resettled to Oklahoma in the nineteenth century under Indian Removal. The long history of the area's Native American population and its influences on the culture and history of the city and its environs.

Ponca City is named after the Ponca Tribe, part of which was relocated from Nebraska to northern Oklahoma from 1877 to 1880. Like all of the forced American Indian removals of the 19th century, the Poncas' trek was arduous. Followed by the government's failure to provide adequate supplies, as well as malaria at their destination, nearly one-third of the Ponca died from illness and exposure. "Out of 700 Ponca who left the Nebraska reservation, 158 died in Oklahoma within two years."[10]

The Ponca protested their conditions. Standing Bear's oldest son died in 1879. The chief had promised to bury him in his homeland, and about 60 Ponca accompanied him back to Nebraska. The US Army was ordered to arrest them for having left the reservation, and they were confined to Fort Omaha. Most of the tribal members who left eventually returned to the reservation in Oklahoma.[11] With the aid of prominent attorneys working pro bono, Standing Bear filed a writ of habeas corpus challenging his arrest. The case of Standing Bear v. Crook (1879) was a landmark decision in the US District Court, where the judge ruled that Indians had the same legal rights as other United States citizens.

A statue was erected in his honor at the intersection of Highway 60 and Standing Bear Parkway in Ponca City. In the late twentieth century, the city developed a park and museum, named in his honor.[citation needed]

The Ponca Nation, which has kept its headquarters south of Ponca City since 1879, played a major part in the development of the Marland Oil Co. and the city. Chief White Eagle leased resource-containing portions of the tribe's allotted land to E.W. Marland in 1911 for oil exploration and development.[citation needed]

Since the late 20th century, the Ponca Tribe has worked to build its infrastructure and improve services for its people. In February 2006, the tribe received a grant of more than $800,000 from the Shakopee Mdewakanton Sioux Community of Minnesota for debt retirement and economic development.[citation needed]

Nearby north-central tribes are the Kaw, Osage, Otoe-Missouria, Pawnee and Tonkawa. These are all federally recognized tribes, as is the Ponca Tribe of Indians of Oklahoma. In 1994 the six tribes established the Standing Bear Foundation and Pow-wow, beginning the first of annual shared pow-wows, to which they invite the public. They wanted to build collaboration among the tribes and with the non-Native residents of Ponca City. The pow-wow is now held in Standing Bear Park, which was named in honor of the notable Ponca chief.[citation needed]

The Ponca City region of Oklahoma is part of tornado alley. Tornadoes are most common in April, May and June. The photo shows a historic photo of a classic wide tornado funnel taken near Ponca City between 1890 and 1920. Ponca City faces very hot and humid summers known to average over 100 F as well as severe storms. During the winters, Ponca City consists of mostly mild to strong winters with snowstorms and ice.

Phillips 66 has 1,500 employees and 650 contractors in its facilities in Ponca City. The company has a credit card center, a refining complex, a technology research center and a transportation office. The Ponca City Refinery, operated by Phillips66, is the largest refinery in the state of Oklahoma.[19]

E. W. Marland built the Ponca City refinery in 1918 and founded the Marland Oil Company. In 1929, the Continental Oil Company merged with Marland, and the two became Conoco Inc. The Conoco headquarters were in Ponca City until 1949, when it moved to Houston, Texas. In 2002 Conoco Inc. and Phillips Petroleum Company, whose headquarters were in nearby Bartlesville, Oklahoma merged into ConocoPhillips.[19]

File:Pioneer Woman in Winter.jpg
The Pioneer Woman statue was modeled by sculptor Bryant Baker and was unveiled in a public ceremony on April 22, 1930, when forty thousand guests came to hear Will Rogers pay tribute to Oklahoma's pioneers. The statue is 27 feet (8.2 m) high and weighs 12,000 pounds.

Ponca City is the site of the Pioneer Woman Museum and the Pioneer Woman statue. The statue was erected to commemorate women pioneers. In the early 1920s, E. W. Marland decided to create a statue commemorating the Pioneer Woman.[20] Marland was reportedly asked, "E. W., why don't you have ... a statue to the vanishing American, a Ponca, Otoe, or an Osage - a monument of great size?" Marland answered, "the Indian is not the vanishing American - it's the pioneer woman."[20] He sponsored a competition for the winning statue.

In 1927, miniature 3 feet (0.9 m) sculptures were submitted as part of a competition by 12 U.S. and international sculptors: John Gregory, Maurice Sterne, Hermon Atkins MacNeil, James Earle Fraser, Alexander Stirling Calder, Wheeler Williams, Mario Korbel, F. Lynn Jenkins, Mahonri Young, Arthur Lee, Jo Davidson and Bryant Baker). They were displayed in twelve cities around the state, where they were viewed by 750,000 people who voted for their favorite. The twelve original submissions have been on display at the museum at Woolaroc near Bartlesville, Oklahoma since the 1930s. Marland sold them to Frank Phillips after losing control of the Marland Oil Company.[citation needed]

The British-born American sculptor Bryant Baker was chosen as the winner. His full-scale work was unveiled in a public ceremony on April 22, 1930. Forty thousand guests came to hear Will Rogers pay tribute to Oklahoma's pioneers. The statue is 27 feet (8.2 m) high and weighs 12,000 pounds.[citation needed]

A related museum commemorating Oklahoma women was opened on September 16, 1958, on the 65th anniversary of the Cherokee Strip land run.[21] It recognizes the work of Native American as well as European-American women, and their leadership and stamina in creating homes, raising children and taking care of the work of sustaining life and communities.[citation needed]

Ponca City Regional Airport (airport code PNC) (1007 feet above mean sea level) is located at the northwest corner of the city at 36 degrees 43.84 north latitude and 97 degrees 05.99 west longitude. The facility has a 7,201 foot 17-35 runway which is 150 feet (46 m) wide, and the un-towered facility has a full-length taxiway. The local airport booster club hosts a fly-in breakfast every first Saturday of the month, year around, "rain or shine".

File:Bill Pickett Handbill.jpg
Bill Pickett's image on a handbill advertising the movie "The Bull-Dogger," released in 1921 by The Norman Film Manufacturing Company. Pickett was billed as "the world's colored champion" in "death-defying feats of courage and skill."

The Town of Ponca City was one of the filming locations for 1996 movie Twister.[23]

In the cartoon series The Rocky and Bullwinkle Show, Bullwinkle is said to have relatives in Ponca City.[24]

In an episode of The Rockford Files, James Garner, a native Oklahoman, mentions Ponca City.

A film about E. W. Marland is in production to shoot in Ponca City, Titled "The Ends of the Earth". The film will star Academy Award winner Jennifer Lawrence. Production is expected to start in 2014.