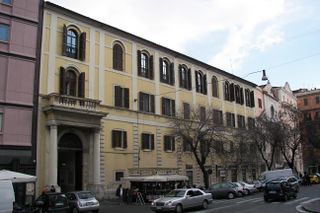 The Pontifical Oriental Institute, across the street from the Basilica of Santa Maria Maggiore in Rome.

The Institute maintains an important library of Christian oriental literature. One special holding is a rare collection of Old Slavonic manuscripts.

The Institute has been located across from the Basilica of Santa Maria Maggiore since 1926. It is separated from the Collegium Russicum by the Church of Saint Antony.

According to article 16 of the Lateran Treaty, signed in 1929 between Italy and the Holy See, the property of the Oriental Institute enjoys a certain level of extraterritoriality, with the Holy See having all rights over the infrastructure without interference from the Italian State, and free from all Italian taxation.

The Institute is a member of the Gregorian Consortium.

In spoken language, the school is sometimes simply referred to as "The Orientale".