From Infogalactic: the planetary knowledge core
Jump to: navigation, search
For the unincorporated community in Johnston County, see Pontotoc, Oklahoma. For other uses, see Pontotoc.

Pontotoc County is in the south central part of Oklahoma. As of the 2010 census, the population was 37,492.[1] Its county seat is Ada.[2] The county was created at statehood from part of the Chickasaw Nation in Indian Territory. It was named for a historic Chickasaw tribal area in Mississippi. According to the Encyclopedia of Oklahoma History and Culture, Pontotoc is usually translated "cattail prairie" or "land of hanging grapes." [3]

The Chickasaw Nation's headquarters are in Ada.

The present Pontotoc County was part of the land that the U. S. government granted in 1830 to the Choctaw tribe via the Treaty of Dancing Rabbit Creek. In 1837, the Chickasaw tribe was granted land within the Choctaw domain. In 1857, the Chickasaw Nation formed its own government on this land. However, few Chickasaw settled there until after the Civil War, mainly because of attacks by various Plains Indian tribes.[3]

The first settlers located in the vicinity of Boggy Depot during the 1840s. Camp Arbuckle was established to protect migrants traveling on the California Road. After the Civil War, settlements began spreading through the area. Some of the new settlers were illegal white intruders and outlaws. The first post office was established at Stonewall in 1878. The town of Ada was founded in 1890. After three railroads built linesthrough Ada, it became the dominant community of the area. Ada was named county seat when Pontotoc County was created.[3] 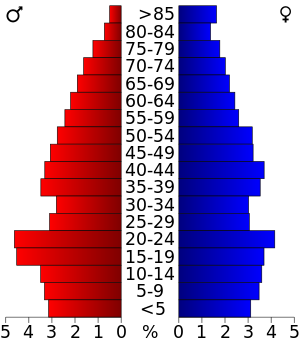 Age pyramid for Pontotoc County, Oklahoma, based on census 2000 data.

Cattle ranching was one of the most important economic activities in this area up through the territorial period. Agriculture rose to prominence in the early 20th Century, with cotton being the most important crop. Cattle raising reemerged as the major industry, and the county is sometimes called "Hereford Heaven." [3]

Other important economic activities include limestone quarrying, cement production, light manufacturing, services and government. The city of Ada is the headquarters of the Chickasaw Nation, and the base of the Carl Albert Indian Health System.[3]

The following sites in Pontotoc County are listed on the National Register of Historic Places: