Not to be confused with the Hyundai Pony car.

Pony car is an American class of automobile launched and inspired by the Ford Mustang in 1964.[1][2] The term describes an affordable, compact, highly styled car with a sporty or performance-oriented image.[3][4]

Origins of the class

The pony car had its origins in the late 1950s demise of the original two-seat Ford Thunderbird. While the model's 1958 transformation into a larger, four-seat personal luxury car proved to be a sales success, Ford dealers and consumers alike lamented the loss of the sporty halo car. For several years Ford explored various plans for a similar showroom traffic-builder to attract buyers who would ultimately purchase more mundane automobiles. 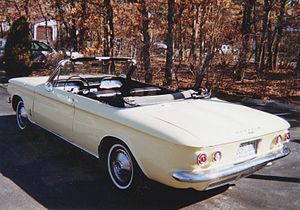 An added impetus came from the 1960 introduction of the popular Chevrolet Corvair. Initially positioned as an economy car, the Corvair's plusher-trimmed and sportier Monza model sold around 144,000 units by 1961, serving as the catalyst for Ford to create the now instantly recognizable Mustang.

The Monza's bucket seats and floor-mounted transmission shifter started a trend toward sportier cars equipped with both in all sizes from compacts to full-size cars. Ford initially responded with Futura and Futura Sprint versions of its Ford Falcon, Chrysler with the Plymouth Valiant Signet and Dodge Dart GT, American Motors (AMC) with the 440-H and Rogue versions of the Rambler American,[5] and Studebaker with the sporty Daytona version of its compact Lark. Other sporty bucket-seat compact cars that appeared during the early 1960s included the Mercury Comet S-22, Oldsmobile F-85 Cutlass, Buick Special Skylark, and Pontiac Tempest LeMans. Most of these sporty compacts came with the same economical six-cylinder engines as their more mundane counterparts, but in some cases more powerful V8 engines were at least optional along with four-speed manual transmissions and center consoles between the front bucket seats.

Some technical developments that debuted in early sporty compact cars in the U.S. (1961–63) included a turbocharged six-cylinder in the rear-engine Corvair Monza Spyder/Corsa (1962–66), turbocharged aluminum V8 on the 1962–63 Oldsmobile Cutlass Jetfire, and a standard 194 cu in (3.2 L) four-cylinder engine/rear transaxle combination on the 1961–63 Pontiac Tempest LeMans (available with an optional high performance four-barrel carburetor). In 1963, the LeMans introduced a 326 cu in (5.3 L) V8 option (large for a compact car) producing up to 280 hp (209 kW).

Although these sporty versions of mundane compact cars were a commercial success for most automakers, some auto executives—led by Ford's Lee Iacocca—believed they only scratched the surface of the potential market. During this period there was a strong influx of young buyers with discretionary income and a taste for vehicles with a younger image than a standard sedan. Iacocca's marketing studies revealed that if a unique-looking sporty car could be offered at an affordable price, it would find many buyers. Ford's response was the Mustang, an enormous success right from its April 17, 1964 launch. Year 1 sales forecasts of 100,000 units were shattered on the first day, when Ford dealers took orders for 22,000 vehicles, forcing the company to shift production mid-year. The extended model year sales totaled 618,812 Mustangs.[6]

The 1964 Mustang provided the template for the new class of automobiles.[7][8] The term "Pony car" to describe members of its ranks was coined by Car Life magazine editor Dennis Shattuck.[9]

Although the Mustang was based on the Falcon platform, its "long hood, short deck" look was unique. Offered as a two-door coupé and convertible, it was nevertheless mechanically mundane in its basic form, with a 170 cu in (2.8 L) six-cylinder engine coupled to a three-speed manual transmission. Its attractive US$2,368 base price included bucket seats, carpeting, floor shifter, sport steering wheel, and full wheel covers. Importantly, it had an extensive list of options that featured V8 engines, Cruise-O-Matic automatic transmission or four-speed manual gearbox, radios, air conditioning, power steering, and other accessories.[10] A fully dressed V8 Mustang could increase sticker price by up to 60%, which generated excellent profits for Ford.[11]

As a result, the basic two-door, four passenger Pony Car characteristics were set:[12][13]

Tellingly, while most pony cars were available with more powerful engines and performance packages—enough to propel some into the muscle car realm—the vast majority were sold with six-cylinder engines or ordinary V8s.[14] For the most part, the high-performance models saw limited sales and were largely limited to drag racing, road racing, or racing homologation purposes.[citation needed] 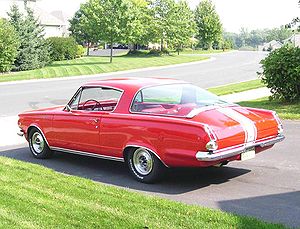 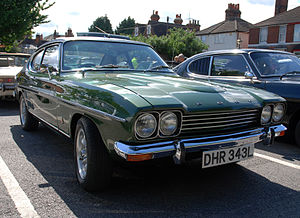 Despite the immediate success of the Mustang, many (including some within Ford) feared that the bubble would soon burst. Even though an early competitor, the Plymouth Barracuda, had actually gone on sale two weeks earlier (on April 1, 1964),[15] other manufacturers were generally relatively slow to respond.

Well aware of the Mustang's upcoming debut, Chrysler had sought a low-cost way to expand the appeal of its mainstream compact Valiant. The company's precarious financial situation meant the resulting Barracuda was compromised, with insufficient distinction from the Valiant and styling that drew mixed reactions. As a result its sales were a fraction of the Mustang's.[16]

Initially, General Motors believed that the restyled 1965 Corvair would be an adequate challenger for the Mustang. However, when it became clear that the Corvair itself was doomed, the more conventional Chevrolet Camaro was introduced.[13] It appeared in 1967, at the time the Mustang received its first major redesign, and was joined by the Camaro-based Pontiac Firebird and the Mustang-based Mercury Cougar. American Motors made its entry late in 1967 with the Javelin.[17] It was described by race driver Gordon Johncock "as a roomy, comfortable, peppy and handsome example of a so-called pony car, the type of automobile that's showing up more and more on US highways."[18] Although U.S. showrooms were awash in pony cars a final contender appeared in 1970, Dodge's Challenger, essentially an enlarged Barracuda.[19][20]

The term pony car applied to all versions of these nameplates, from base models through high-performance "muscle car" extremes,[21] developed in league with factory supported racing to gain a marketing edge.[22] The competition between the manufacturers was so fierce the Trans-Am Series from 1966 to 1972 is described as "The Pony Car Wars".[23]

While sales were strong throughout the end of the 1960s, pony cars' greater value was in generating brand loyalty, particularly among the crucial youth market. In 1970 Car and Driver reported that while very few pony car drivers bought a second, around 50% purchased another model from the same manufacturer. Even so, by as early as 1969 sales were beginning to slide, dropping to 9% of the total market from a peak of 13% in 1967.

The success Ford experienced with the Mustang also inspired Japanese car maker Toyota to introduce the Celica in 1970.[24] Parroting Ford, Toyota built the first Celica on their compact economy Carina platform. Though the smaller Celica had a generally similar appearance to the Mustang, no Japanese automaker came forward with a V8-powered, rear-drive sporty coupe.[25] Instead they largely stayed with 4- and 6-cylinder models that accentuated practicality at the expense of personality, from the Celica to the Datsun 240Z.[25] The "4-cylinder Honda Preludes of 1978–2001, had no trace of the daring, danger and aggression that appeal to fans of powerful American muscle cars,"[25] reflecting heavy taxes imposed by Japanese Government regulations on engines over 2,000 cc (120 cu in).

In Europe, Ford began production of the Ford Capri,[26] while GM of Europe introduced the Vauxhall Firenza. In April 1970, Ford began selling the Capri in North America as the Mercury Capri, as well as in South Africa and Australia. 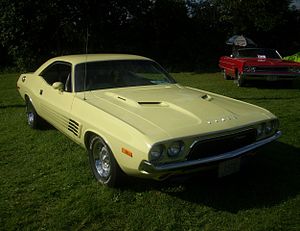 As with most automobile redesigns, each subsequent generation of the pony cars grew somewhat larger, heavier, costlier, and more plush. Big-block engines joined the option list, and both performance and comfort options proliferated. The 1973 Mustang, for example, was 8.5 inches (216 mm) longer, 5.9 inches (150 mm) wider, and over 600 pounds (272 kg) heavier than the original edition. The Dodge Challenger, meanwhile, was only slightly smaller and lighter than Dodge's intermediate cars. The added bulk left the standard six and V8 engines sorely pressed, while the introduction of powerful big-blocks underscored the limitations of the pony cars' suspension, brakes, and tires.

By 1970 buyers were moving away from the pony cars, either toward smaller compact cars (domestic or imported) or toward larger, more luxurious models. Performance of the hottest pony cars began to erode as a result of emissions controls and the added weight of required safety features. The 1973 oil crisis left the bulky pony cars out of step with the marketplace.

The Challenger, Barracuda, and Javelin were cancelled after 1974, and the Camaro and Firebird nearly died at the same time, although they received last-minute stays of execution. The Cougar, originally billed as an upscale version of the Mustang, remained available as a luxury vehicle, while the Mustang was reinvented as the Mustang II and marketed as fuel efficient compact with luxury or sporting trim packages. 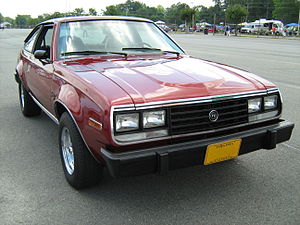 Popularity was culturally promoted by such examples as the Firebird Trans Am in popular movies such as Smokey and the Bandit, and TV programs such as The Rockford Files and Knight Rider, the GM pony cars experienced resurgence in popularity in the late 1970s that helped ensure their continuation. The Mustang was redesigned with a renewed sporty image in 1979, prompting Mercury to reenter the pony car market with a Mercury Capri twin based on the new Mustang. Chrysler, beset by financial problems, did not revive the pony car, although it did offer other front-wheel drive performance models with a similar spirit. American Motors brought back its AMX model name to the performance-oriented I6 or V8 powered rear-drive Spirit, a similar car to the Mustang hatchback of that era. Advertising with the line "don't horse around" compared the value of AMC's model in relation to the 1979 Ford Mustang.[27] In 1982, the "Spirit GT became America's first pony car available with a 5-speed gearbox."[28]

Sales of the Mustang remained strong, although in the 1980s Ford gave serious consideration to replacing it with a front-drive model (which eventually appeared as the Ford Probe instead). Emissions and fuel economy concerns led many of the latter-day pony cars to offer four-cylinder engines (sometimes with turbocharging), although they were never as popular as six-cylinder and V8 models.

By the mid-1980s, the pony car survivors (Mustang, Camaro, and Firebird) enjoyed a period of renewed popularity as progressively more and more powerful (yet relatively fuel-efficient) V8 engines were offered in performance-oriented versions of these vehicles. However, declining sales and the growing popularity of rear-wheel drive light trucks and sport utility vehicles ultimately led to the demise of the Camaro and Firebird after the 2002 model year.

The dilemma facing automakers in offering pony cars (or their equivalent) going forward is developing a suitable platform that is affordable and capable enough to be viable. Unlike the mid-1960s, the large majority of modern compact cars are front-wheel drive, with four- and six-cylinder engines, and the widespread use of unibody construction makes engineering a specialized body an expensive proposition.

In 2005, Ford introduced a new Mustang based on a dedicated platform. The success of this model inspired Dodge to reintroduce the Challenger in 2008 and Chevrolet to reintroduce the Camaro for 2010, which unlike previous pony cars, were based off full-size car architectures.

NASCAR brought pony cars to its second-tier Nationwide Series at the Subway Jalepeno 250 at Daytona International Speedway in Daytona, Florida, on Friday, July 2, 2010.[29] Dodge raced its Challenger, and Ford raced the iconic Mustang. The new cars are seen as a move by NASCAR to re-establish brand identity with fans and the cars on the track.[30] The pony cars are expected to make their way to NASCAR's premier Sprint Cup Series in the 2014 season.[31]

Also, silhouettes of the Chevrolet Camaro have competed in the Rolex Sports Car Series, whereas production-based versions of the Camaro, Challenger and Mustang have raced in the SCCA World Challenge and Continental Tire Sports Car Challenge, as well as SCCA and NASA amateur competitions. The Camaro and Mustang have been adapted to GT3 regulations, although not by Chevrolet or Ford themselves.