Pop music (a term that derives from "popular") is a genre of popular music that originated in its modern form in the Western world during the 1950s and 1960s, deriving from rock and roll. The terms "popular music" and "pop music" are often used interchangeably, although the former describes all music that is popular (and can include any style).

Pop music is eclectic, and often borrows elements from other styles such as urban, dance, rock, Latin, and country; nonetheless, there are core elements that define pop music. Identifying factors include generally short to medium-length songs written in a basic format (often the verse-chorus structure) as well as the common employment of repeated choruses, melodic tunes, and hooks.

David Hatch and Stephen Millward define pop music as "a body of music which is distinguishable from popular, jazz, and folk musics".[1] According to Pete Seeger, pop music is "professional music which draws upon both folk music and fine arts music".[2] Although pop music is seen as just the singles charts, it is not the sum of all chart music. The music charts contain songs from a variety of sources, including classical, jazz, rock, and novelty songs. Pop music, as a genre, is seen as existing and developing separately.[3] Thus "pop music" may be used to describe a distinct genre, aimed at a youth market, often characterized as a softer alternative to rock and roll.[4] 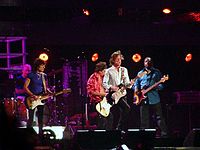 The term "pop song" was first recorded as being used in 1926, in the sense of a piece of music "having popular appeal".[5] Hatch and Millward indicate that many events in the history of recording in the 1920s can be seen as the birth of the modern pop music industry, including in country, blues and hillbilly music.[6]

According to the website of The New Grove Dictionary of Music and Musicians, called Grove Music Online, the term "pop music" "originated in Britain in the mid-1950s as a description for rock and roll and the new youth music styles that it influenced ...".[7] The Oxford Dictionary of Music states that while pop's "earlier meaning meant concerts appealing to a wide audience ... since the late 1950s, however, pop has had the special meaning of non-classical mus[ic], usually in the form of songs, performed by such artists as the Beatles, the Rolling Stones, ABBA, etc".[8] Grove Music Online also states that "... in the early 1960s [the term] 'pop music' competed terminologically with Beat music [in England], while in the USA its coverage overlapped (as it still does) with that of 'rock and roll'".[7]

From about 1967 the term was increasingly used in opposition to the term rock music, a division that gave generic significance to both terms.[9] Whereas rock aspired to authenticity and an expansion of the possibilities of popular music,[9] pop was more commercial, ephemeral and accessible.[10] According to Simon Frith pop music is produced "as a matter of enterprise not art", is "designed to appeal to everyone" and "doesn't come from any particular place or mark off any particular taste". It is "not driven by any significant ambition except profit and commercial reward ... and, in musical terms, it is essentially conservative". It is, "provided from on high (by record companies, radio programmers and concert promoters) rather than being made from below ... Pop is not a do-it-yourself music but is professionally produced and packaged".[4]

The story of pop music is largely the story of the intertwining pop culture of the United States and the United Kingdom in the postwar era.

Throughout its development, pop music has absorbed influences from most other genres of popular music. Early pop music drew on the sentimental ballad for its form, gained its use of vocal harmonies from gospel and soul music, instrumentation from jazz, country, and rock music, orchestration from classical music, tempo from dance music, backing from electronic music, rhythmic elements from hip-hop music, and has recently appropriated spoken passages from rap.[4]

It has also made use of technological innovation. In the 1940s improved microphone design allowed a more intimate singing style[12] and ten or twenty years later inexpensive and more durable 45 r.p.m. records for singles "revolutionized the manner in which pop has been disseminated" and helped to move pop music to 'a record/radio/film star system'.[12] Another technological change was the widespread availability of television in the 1950s; with televised performances, "pop stars had to have a visual presence".[12] In the 1960s, the introduction of inexpensive, portable transistor radios meant that teenagers could listen to music outside of the home.[12] Multi-track recording (from the 1960s); and digital sampling (from the 1980s) have also been utilized as methods for the creation and elaboration of pop music.[4] By the early 1980s, the promotion of pop music had been greatly affected by the rise of Music Television channels like MTV, which "favoured those artists such as Michael Jackson and Madonna who had a strong visual appeal".[12] 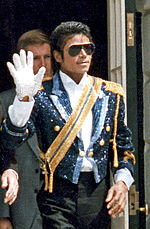 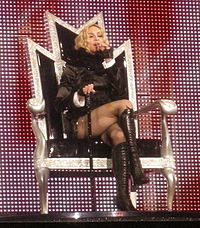 Pop music has been dominated by the American and (from the mid-1960s) British music industries, whose influence has made pop music something of an international monoculture, but most regions and countries have their own form of pop music, sometimes producing local versions of wider trends, and lending them local characteristics.[17] Some of these trends (for example Europop) have had a significant impact of the development of the genre.[18]

According to Grove Music Online, "Western-derived pop styles, whether coexisting with or marginalizing distinctively local genres, have spread throughout the world and have come to constitute stylistic common denominators in global commercial music cultures".[19] Some non-Western countries, such as Japan, have developed a thriving pop music industry, most of which is devoted to Western-style pop, has for several years produced a greater quantity of music of everywhere except the USA.[19] The spread of Western-style pop music has been interpreted variously as representing processes of Americanization, homogenization, modernization, creative appropriation, cultural imperialism, and/or a more general process of globalization.[19]

According to British musicologist Simon Frith, characteristics of pop music include an aim of appealing to a general audience, rather than to a particular sub-culture or ideology, and an emphasis on craftsmanship rather than formal "artistic" qualities.[4] Music scholar Timothy Warner said it typically has an emphasis on recording, production, and technology, rather than live performance; a tendency to reflect existing trends rather than progressive developments; and aims to encourage dancing or uses dance-oriented rhythms.[10]

The main medium of pop music is the song, often between two and a half and three and a half minutes in length, generally marked by a consistent and noticeable rhythmic element, a mainstream style and a simple traditional structure.[20] Common variants include the verse-chorus form and the thirty-two-bar form, with a focus on melodies and catchy hooks, and a chorus that contrasts melodically, rhythmically and harmonically with the verse.[21] The beat and the melodies tend to be simple, with limited harmonic accompaniment.[22] The lyrics of modern pop songs typically focus on simple themes – often love and romantic relationships – although there are notable exceptions.[4]

Harmony in pop music is often "that of classical European tonality, only more simple-minded."[23] Clichés include the barbershop harmony (i.e. moving from a secondary dominant harmony to a dominant harmony, and then to the tonic) and blues scale-influenced harmony.[24] There was a lessening of the influence of traditional views of the circle of fifths between the mid-1950s and the late 1970s, including less predominance for the dominant function.[25]

In the 2000s, three trends affected pop music: declining sales of CDs, high levels of online piracy, and the growth of pop careers launched through televised talent shows. During this period, some music critics,[27] social commentators,[28][29] and music industry insiders[30] stated that modern pop music was declining in quality, due to bands writing songs that were more formulaic and revenue-driven, and less creative, and due to singers being less talented than those of previous eras. However, the dip in music sales[31] largely ended in 2012 to 2013[32] as legal digital downloads from iTunes and paid audio streaming websites became well established.[33] According to Robert Christgau in 2014, pop music worldwide is permeated by electronic dance music.[11]