In life, Benedict XIV was loved by the people of the Papal States who praised him. He was incredibly intelligent and witty, had a sense of humour and was dubbed the "Pope of Concordats" during his papacy. He was known to be a proud patron of the arts and of science. He was well known for visiting major edifices and monuments in Rome by carriage and sedan chair to make public appearances.

Perhaps one of the greatest scholars in Christendom, yet often overlooked, he promoted scientific learning, the baroque arts, reinvigoration of Thomism, and the study of the human form. Firmly established with great devotion and adherence to the Council of Trent and authentic Catholic teaching, Benedict removed changes previously made to the Breviary, sought to peacefully reverse growing secularism in certain European courts, invigorated ceremonies with great pomp, and throughout his life and his reign, published numerous theological treatises. In terms of the governance of the Papal States, he reduced taxation and also encouraged agriculture. He also supported free trade. A scholar, he laid the groundwork for the present Vatican Museum. Benedict XIV, to an extent can be considered a polymath due to his numerous studies of ancient literature, the publishing of ecclesiastical books and documents, the study of the human body, and his great devotion to art and theology.

Lambertini was born into a noble family of Bologna to Marcello Lambertini and Lucrezia Bulgarini, the third of five children. At the time of his birth, Bologna was the second largest city in the Papal States. At the age of thirteen, he began attending the Collegium Clementianum in Rome, where he studied rhetoric, Latin, philosophy, and theology. During his studies as a young man, he often studied the works of St. Thomas Aquinas, who was his favorite author and saint. While he enjoyed studying at Collegium Clementianum, the bent of his mind was well towards ecclesiastical and civil law, and actively enforcing it. Soon after, in 1694 at the young age of nineteen, he received the degree of Doctor of Sacred Theology and Doctor Utriusque Juris, (both ecclesiastical and civil law).[2]

He was made Bishop of Ancona in 1727. He was created a cardinal in pectore, his name being published on 30 April 1728, and was subsequently made the Cardinal-Priest of Santa Croce in Gerusalemme on 10 May 1728. He also served as the Archbishop of Bologna.[2]

Ascension to the papacy

After the death of Pope Clement XII, Lambertini attended the papal conclave to choose a successor. It would last for six months. After long deliberation, Lambertini was put forth to the cardinal electors as a compromise candidate, and it is reported that he said to the members of the College of Cardinals "If you wish to elect a saint, choose Gotti; a statesman, Aldrovandi; an honest man, me".[3] (Vincenzo Ludovico Gotti (1664–1742) was professor of philosophy at the College of Saint Thomas, the future Pontifical University of Saint Thomas Aquinas, Angelicum,[4][5] and perhaps the leading Thomist of his time. Aldrovandi was a canon lawyer and Cardinal of the Catholic Church).

This appears to have assisted his cause for winning the election, which also benefited from his reputation for deep learning, gentleness, pomp, wisdom, and piety in policy. On 17 August 1740 he was elected in the evening and took his new pontifical name of Benedict XIV in honour of Pope Benedict XIII. He was crowned on 21 August 1740, and by 30 August 1740 the famous ephemeral baroque structures of the Festival of the Chinea and the triumphal arch of Benedict XIV were erected by Charles III of Spain, who was then a Pontifical vassal and monarch of the Kingdom of Naples. 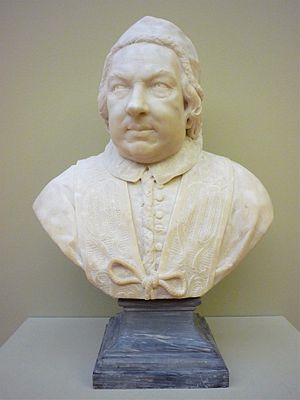 Bust of Benedict XIV by Pietro Bracci, Museum of Grenoble

Lambertini's papacy as Pope Benedict XIV began in a time of great difficulties, chiefly caused by the disputes between Catholic rulers and the papacy about governmental demands to nominate bishops rather than leaving the appointment to the Church. He managed to overcome most of these problems — the Holy See's disputes with the Kingdom of Naples, Sardinia, Spain, Venice, and Austria were settled.

He had a very active papacy, reforming the education of priests, the calendar of feasts of the Church, and many papal institutions. Perhaps the most important act of Benedict XIV's pontificate was the promulgation of his famous laws about missions in the two bulls, Ex quo singulari and Omnium solicitudinum. In these bulls he ruled on the custom of accommodating non- Christian words and usages to express Christian ideas and practices of the native cultures, which had been extensively done by the Jesuits in their Indian and Chinese missions. An example of this is the statues of ancestors – there had long been uncertainty whether honour paid to one's ancestors was unacceptable 'ancestor worship,' or if it was something more like the Catholic veneration of the saints. This question was especially pressing in the case of an ancestor known not to have been a Christian. The choice of a Chinese translation for the name of God had also been debated since the early 17th century. Benedict XIV denounced these practices in these two bulls. The consequence of this was that many of these converts left the Church.

The Apostolic Constitution Sacramentorum Poenitentiae of 1741 assigned to the Holy Office the responsibility of safeguarding the sanctity of the sacrament of penance.

On 22 December 1741, Benedict XIV promulgated the papal bull "Immensa Pastorum Principis" against the enslavement of the indigenous peoples of the Americas and other countries.

On 18 May 1743, Benedict XIV signed a document addressed to the Archbishops and Bishops of the Kingdom of Poland regarding marriage,[6] communicating his dissatisfaction with the dissolution of Christian marriages, even long-stable ones, by the Ecclesiastical Courts of Poland without due cause or in violation of canon law.

Benedict XIV was also responsible, along with Cardinal Passionei, for beginning the catalogue of the Vatican Library. Benedetto, Duke of Chablais, a military commander of the French Revolution and member of the House of Savoy (rulers of the kingdom of Sardinia) was named after him. Infanta Benedita of Portugal was also named after him.

In the apostolic constitution Pastoralis Romani Pontificis, which was promulgated on 30 March 1741, he is one of many popes to enforce and declare that he, his predecessors, and all his successors hold Papal Infallibility and that ecumenical councils should be discouraged, as they can undermine the one of the principle pillars of the papacy - infallibility.

In his encyclical, Allatae Sunt , promulgated on 26 July 1755, Benedict XIV declared, echoing the words of Pope Gelasius I, universally banned the act of females serving the priest at the altar, noting that the practice had spread to certain Oriental Rites.

During his papacy, Benedict XIV commissioned a team of architects led by Nicola Salvi and Luigi Vanvitelli to design a large palace that was to be 'more complex and with greater baroque style than the box of a palace Vanvitelli designed in Caserta'. The palace was to be built south of St. Peter's Basilica, but was never built, as the plans were quietly ignored by Benedict's successor, Clement XIII. They were brought up once more by Pius VI late in his papacy, but had to stop due to the possibility of invasion.

Benedict XIV consecrated the expensive gilded baroque chapel (Chapel of St. John the Baptist), on 15 December 1744 in Sant'Antonio dei Portoghesi. The chapel was designed by Nicola Salvi and Luigi Vanvitelli, and was then shipped to Portugal to be placed in the Igreja de Sāo Roque.[8] 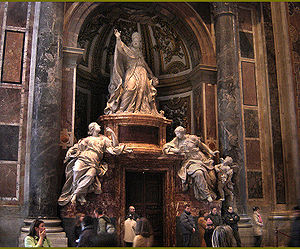 Benedict XIV's health worsened in 1758 and after a battle with gout, he died on 3 May 1758 at the age of 83. His final words to those surrounding him on his deathbed were, "I leave you in the hands of God."[9]

Following his funeral, he was interred in Saint Peter's Basilica and a large catafalque was erected in his honor.