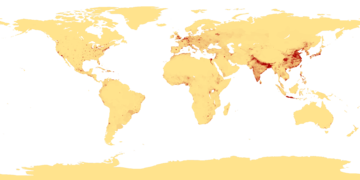 The distribution of world population in 1994

Population typically refers the number of people in a single area whether it be a city or town, region, country, or the world. Governments typically quantify the size of the resident population within their jurisdiction by a process called a census (a process of collecting, analysing, compiling, and publishing data regarding a population).

In sociology and population geography, population refers to a group of humans beings with some predefined criterion in common, such as location, race, ethnicity, nationality, or religion. Demography is a social science which entails the statistical study of populations.

In ecology, a population is a group of organisms of the same species who inhabit the same particular geographical area and are capable of interbreeding.[1][2] The area of a sexual population is the area where inter-breeding is possible between any pair within the area and more probable than cross-breeding with individuals from other areas.[3]

In ecology, the population of a certain species in a certain area can be estimated using the Lincoln index.

In genetics, a population is often defined as a set of organisms in which any pair of members can breed together. This means that they can regularly exchange gametes to produce normally-fertile offspring, and such a breeding group is also known therefore as a gamodeme. This also implies that all members belong to the same species.[4] If the gamodeme is very large (theoretically, approaching infinity), and all gene alleles are uniformly distributed by the gametes within it, the gamodeme is said to be panmictic. Under this state, allele (gamete) frequencies can be converted to genotype (zygote) frequencies by expanding an appropriate quadratic equation, as shown by Sir Ronald Fisher in his establishment of quantitative genetics.[5]

This seldom occurs in nature: localization of gamete exchange – through dispersal limitations, preferential mating, cataclysm, or other cause – may lead to small actual gamodemes which exchange gametes reasonably uniformly within themselves but are virtually separated from their neighboring gamodemes. However, there may be low frequencies of exchange with these neighbors. This may be viewed as the breaking up of a large sexual population (panmictic) into smaller overlapping sexual populations. This failure of panmixia leads to two important changes in overall population structure: (1) the component gamodemes vary (through gamete sampling) in their allele frequencies when compared with each other and with the theoretical panmictic original (this is known as dispersion, and its details can be estimated using expansion of an appropriate binomial equation); and (2) the level of homozygosity rises in the entire collection of gamodemes. The overall rise in homozygosity is quantified by the inbreeding coefficient (f or φ). Note that all homozygotes are increased in frequency – both the deleterious and the desirable. The mean phenotype of the gamodemes collection is lower than that of the panmictic original – which is known as inbreeding depression. It is most important to note, however, that some dispersion lines will be superior to the panmictic original, while some will be about the same, and some will be inferior. The probabilities of each can be estimated from those binomial equations. In plant and animal breeding, procedures have been developed which deliberately utilize the effects of dispersion (such as line breeding, pure-line breeding, backcrossing). It can be shown that dispersion-assisted selection leads to the greatest genetic advance (ΔG=change in the phenotypic mean), and is much more powerful than selection acting without attendant dispersion. This is so for both allogamous (random fertilization)[6] and autogamous (self-fertilization) gamodemes.[7]

Main articles: World population and Demographics of the world

According to the United States Census Bureau the world's population was about 7.55 billion in 2019[8] and that the 7 billion number was surpassed on 12 March 2012. According to a separate estimate by the United Nations, Earth's population exceeded seven billion in October 2011, a milestone that offers unprecedented challenges and opportunities to all of humanity, according to UNFPA.[9]

Researcher Carl Haub calculated that a total of over 100 billion people have probably been born in the last 2000 years.[12] 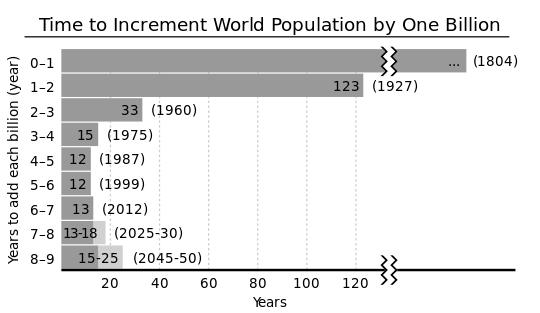 The years taken for every billion people to be added to the world's population, and the years that population was reached (with future estimates).

Population growth increased significantly as the Industrial Revolution gathered pace from 1700 onwards.[13] The last 50 years have seen a yet more rapid increase in the rate of population growth[13] due to medical advances and substantial increases in agricultural productivity, particularly beginning in the 1960s,[14] made by the Green Revolution.[15] In 2017 the United Nations Population Division projected that the world's population will reach about 9.8 billion in 2050 and 11.2 billion in 2100.[16]

In the future, the world's population is expected to peak,[17] after which it will decline due to economic reasons, health concerns, land exhaustion and environmental hazards. According to one report, it is very likely that the world's population will stop growing before the end of the 21st century. Further, there is some likelihood that population will actually decline before 2100.[18][19] Population has already declined in the last decade or two in Eastern Europe, the Baltics and in the Commonwealth of Independent States.[20]