Lüshunkou is located at the extreme southern tip of the Liaodong Peninsula. It has an excellent natural harbour, the possession and control of which became a casus belli of the Russo-Japanese War (1904–05). Japanese and then Soviet administration continued until 1953. During the first decade of that period, it was world famous and was more significant than the other port on the peninsula, Dalian proper. In Western diplomatic, news, and historical writings, it was known as Port Arthur, and during the period when the Japanese controlled and administered the Liaodong (formerly Liaotung) Peninsula it was called Ryojun (旅順), the Japanese pronunciation of the Chinese characters in the city's name. 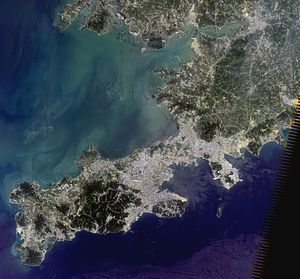 Downtown Dalian is some 64 kilometres (40 miles) farther up the coast, sprawling around the narrowest neck of the Liaodong Peninsula (Chinese: 辽东半岛), whereas Lüshun occupies its southern tip. (See Landsat Map below Zoomed – Lüshun City surrounds the lake-like structure clearly visible near the peninsular tip—the lake-like feature is the inner natural harbour of the port, a very well-sheltered and fortifiable harbor to 19th century eyes.)

Clearly seen on the map (above right) are the Liaodong Peninsula and its relation to Korea, the Yellow Sea (Chinese: 黄海) to its southeast, the Korea Bay (Chinese: 西朝鲜湾) to its due east, and the Bohai Sea (or Gulf) (Chinese: 渤海) to its west. Beijing is almost directly (due west-northwest) across the Bo Hai Gulf from the port city.

Surrounded by ocean on three sides, this strategic seaport was originally known to the Chinese as Lüshun. It took its English name, Port Arthur, from a Royal Navy Lieutenant named William C. Arthur who surveyed the harbor in the gunboat HMS Algerine in August 1860, during the Second Opium War. At that time Lüshun was an unfortified fishing village. The port was known as Port-Artur (Порт-Артур) under Russian administration and later Ryojun (旅順) under Japanese administration. After World War II, the region found itself under Soviet and finally Chinese rule. These and additional geo-historical name changes and recent history are delineated in the related article on Dalian.

As a focal point in history 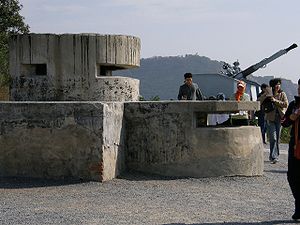 In the late 1880s, the German company Krupp was contracted by the Chinese government to build a series of fortifications around Port Arthur. Reportedly, this was after local contractors had "made an extensive bungle of the job."[4]

Port Arthur first came into international prominence during the First Sino-Japanese War (1894–1895). Following Japan's defeat of Chinese troops at Pyongyang in Korea in September 1894, the Japanese First and Second Armies converged on the Liaodong Peninsula by land and sea. Japanese war planners, ambitious for control of the Liaodong Peninsula and Port Arthur and also cognizant of that port's strategic position controlling the northern Yellow Sea routes and the passage to Tianjin, were determined to seize it.

Following only token resistance during the day and night of November 20–21, 1894, Japanese troops entered the city on the morning of November 21. Several Western newspaper correspondents present at the time related the widespread massacre of Chinese inhabitants of the city by the victorious Japanese troops, apparently in response to the murderous treatment the Chinese had shown Japanese prisoners of war at Pyongyang and elsewhere.[citation needed] Foremost among the correspondents was James Creelman of the New York World. Though at least one American correspondent present completely contradicted Creelman's account, there is "little doubt" that the Japanese troops "indiscriminately killed" thousands of Chinese soldiers and civilians,[5] and the story of a Japanese massacre soon spread among the Western public, damaging Japan's public image and the movement in the United States to renegotiate the unequal treaties between that country and Japan. The event came to be known as the Port Arthur massacre. 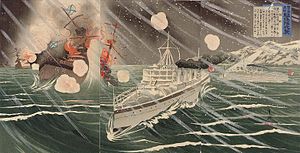 An account of a US sailor who visited the port in the weeks prior to the attack commented that the Chinese soldiers were "ridiculous". They lacked any semblance of military bearing, their dress was unkempt and untidy, and they wandered about the place with little in the way of direction or smartness associated with professional soldiers. He stated that at the time, the garrison numbered approximately 20,000 soldiers, but from his estimation, it should have had between 30,000 and 40,000 men stationed there. He opined that the Japanese could have taken the port with one third of its force, but that against disciplined soldiers, the place should have been impenetrable.[6]

Japan went on to occupy Port Arthur and to seize control of the whole Liaodong Peninsula as spoils of war. As part of the terms of the Treaty of Shimonoseki concluding the war, Japan was granted the Liaodong Peninsula but had to cede back the territory when threatened jointly with war by France, Germany and Russia in what is called the Triple Intervention of 1895. This was seen as a great humiliation in Japan.

Two years later, Russia coerced a lease of the Liaodong from China and gained railroad right-of-way to join the Liaodong Peninsula to the Chinese Eastern Railway with a line running from Port Arthur and nearby Dalny (Dalian) to the Chinese city of Harbin (see Kwantung Leased Territory), and systematically began to fortify the town and harbor at Port Arthur. This railway from Port Arthur to Harbin became a southern branch of the Chinese Eastern Railway (not to be confused with the South Manchurian Railway, the name of a company that undertook its management during the later Japanese period after 1905). All this was an additional goad to an already seething Japan. It was a hard lesson in international geopolitics Japan would not soon forget.

Ten years later Port Arthur again played a central role in war in the Far East. It is fair to say that at its heart, the Russo-Japanese War (1904–1905) was an extended battle for the possession of Port Arthur and the railway to it, the Southern Manchurian Railway. After the Boxer Rebellion (1900–01) had been extinguished by an international coalition of troops, Russia refused to withdraw its reinforcements from Manchuria and instead began to fortify and garrison the entire route along the Southern Manchurian Railway. With this development, Japan proposed the two powers meet and discuss their respective roles in eastern Manchuria, as the area was considered a portion of their respective spheres of influence.

Talks were conducted between 1902 and 1904. While numerous proposals and agreement papers were generated between the two powers, Russia continued the de facto annexation of territory through fortification and garrison, if not de jure while employing stalling tactics in its negotiations. In the end, with over two years of intensive bilateral negotiations having gotten nowhere in clarifying each country's rights, prerogatives, and interests in inner Manchuria, Japan opted for war with Russia.

At the heart of conflict

The Battle of Port Arthur, the opening battle of the Russo-Japanese War, was fought in the heavily fortified harbor of the town of Port Arthur/Lüshun on February 9, 1904 when the Japanese attacked at night with torpedoes, followed by a brief daylight skirmish by major surface combatants. The port eventually fell January 2, 1905 after a long train of battles on land and sea during which the Japanese occupied the whole of the Korean Peninsula, split the Russian Army, devastated the Russian Fleet, cut off the source of supplies on the railway from Harbin, culminating in the bloody battle known as the Siege of Port Arthur (June–January; some sources place the siege start in late July, a technical difference due to definitions). By the end of July, the Japanese army had pushed down the Liaodong peninsula and was at the outer defenses of Port Arthur.

The fact that Japanese forces had closed to within artillery range of the harbor in early August led directly to the naval Battle of the Yellow Sea which solidified Japan's command of the sea, where her fleets continued to blockade the harbor. Virtually all the battles of the war until July 1904 were strategic battles for territorial gain or position leading to the investment and siege of the port city. The Russian town of Dalny (Dalien/Dalian) was undeveloped in this era prior to 1898 when the Russian Tsar Nicholas II of Russia founded the town of Dalny (sometimes Dalney). In 1902, the Russian Viceroy de-emphasized Dalny (building a palace and cultural edifices instead at Port Arthur), except as a commercial port while continuing the development of manufacturing. 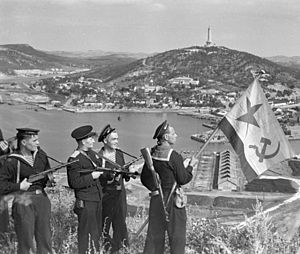 The Japanese-controlled Ryojun City had 40 districts. The Chinese Lüshun City was established on November 25, 1945 to replace Ryojun. The city was a subdivision of a larger Lüda City and contained 40 villages in 3 districts: Dazhong (大众区; 大眾區), Wenhua (文化), and Guangming (光明). In January 1946, Wenhua was merged into Dazhong, and the 40 villages were reduced to 23 communes (坊). In January 1948, the remaining two districts were merged into one: Shinei (市内区; 市內區), with 12 communes.

On January 7, 1960, Lüshun City was renamed Lüshunkou District, still under Lüda. In 1981, Lüda was renamed Dalian, with Lüshunkou remaining a constituent district. In 1985, 7 of Lüshunkou's 9 townships were upgraded to towns.

Lüshunkou District administers 12 subdistricts; all of the former towns were either abolished, merged or converted into subdistricts themselves.[7]

The district's southern half along Lüshun South Road, central Lüshun and the Naval Port zone continue to be off-limits to foreigners, although Lüshunkou District is thoroughly modernized. World Peace Park opened on the western coast of Lüshun, on the Bohai Sea, and is a new sightseeing spot. North of the Park were established the Lüshun Development Zone, and Lüshun New Port (on Yangtou Bay) where the railroad ferry across the Yellow Sea to Yantai is being planned.

The universities in downtown Dalian are being relocated to Lüshunkou. Dalian Jiaotong University (formerly Dalian Railroad University) moved its Software School to the area near the new port, and Dalian University of Foreign Languages and Dalian Medical University relocated their main campuses to the eastern slope of Baiying Mountain, on Lüshun South Road. Dalian Fisheries University is in the process of moving its English and Japanese language schools to Daheishi, on Lüshun North Road. From late 2006, Sinorail has operated Bohai Train Ferry between Lüshun, Dalian, and Yantai, Shangdong.

The historic and modern names, translated into English, of landmark facilities in Lüshun are as follows: