Port Krym (Russian: Порт Крым, Ukrainian: Порт Крим, Crimean Tatar: Qırım Limanı - literally Port Crimea) is a port in Crimea. It is located on the western shore of Kerch Strait, in the north-eastern part of Kerch city near a settlement of Zhukivka. Next to the port is located the Krym railway station.

Port Krym has the Kerch Strait ferry connection with Port Kavkaz on the eastern (Russian) shore of the strait.[1] The port is also a base for pilot boats which guide navigation through the Strait of Kerch.[citation needed] The port is served by a fleet of three ships which were the property of the Ukrainian State Company "Kerch Ferry" as well as two more ships of the Russian company "ANShIP" which provides railroad ferry connection.

Port Krym is a transition point on the

) where it terminates and resumes on the Russian coast at the Port Kavkaz. The type of crossing is ferry, status - local. The types of transportation crossings are passenger and freight. 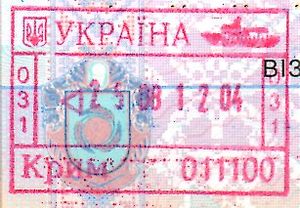 Stamp issued by the Krym port of entry before reunification