Port St. Lucie was a largely uninhabited tract of land south of White City, Florida in the 1950s, composed of a fishing camp, a few farms and businesses near US 1. In 1958, with a budget of $50 million, the General Development Corporation (GDC) purchased the River Park development and 40,000 acres (160 km2) along the North Fork of the St. Lucie River.[5] In 1959, the GDC opened its first bridge over the St. Lucie River, allowing for direct automobile access to Port St. Lucie.

By February 25, 1961 there were 250 homes in the new city. GDC requested the state legislature to incorporate 70 miles (110 km) along with the River Park settlement into the City of Port St. Lucie. River Park did not incorporate into the city at the request of its residents. Port St. Lucie became a city on April 27, 1961 with the passage of House Bill No. 953, proposed by State Representative Rupert Smith and approved by Florida Governor C. Farris Bryant.[6]

In the early 1990s, Core Communities (CC), acquired and began planning what would become St. Lucie West.[citation needed] Originally, St. Lucie West was to have contained about 14,000 homes over a 20-year period on 7 square miles (18 km2).[citation needed] But after realizing the community's strategic position, they began developing it into more than just a residential area. CC began building business sectors and places where people could have fun. That resulted in 7,000 jobs being brought to the small town, helping it into its boom during most of the early 2000s.[7]

In 2006, CC started development of its newest community, Tradition.[citation needed] The community, which sits west of the Interstate 95 intersection of Gatlin Blvd., was a large cattle ranch before CC began to develop it. There they built around 13,000,000 square feet (1,200,000 m2) of commercial area, and room for over 18,000 residences. According to CC's website, Tradition is the largest fully entitled residential development area from the tip of Interstate 95 to the Canadian Border.[citation needed] It is modeled after a 1950s-era town. According to its website, Tradition Square, the town center of the community, holds festivities year-round. It was also chosen as the site of HGTV's Green Home 2009, and one of America's best 100 communities.[7]

In 2007, the housing market began to collapse and unemployment started to rise. As of February 2009, unemployment was at 10½ percent and in 2008, nearly 11,000 homes went into foreclosure. This prompted the county government to consider declaring itself a disaster area. Doing so would have given county administrators access to $17 million in county emergency reserve funds. That money, combined with a transportation fund and other accounts, would give St. Lucie $20 – $30 million to spend on building projects: research parks, highways and other infrastructure improvements.[8]

In 2008, Tradition and Core Communities welcomed the Florida Center of Innovation, a research laboratory and campus, which has a building in Tradition for two biotech and life science companies, the Torrey Pines Institute for Molecular Studies and the Vaccine & Gene Therapy Institute. This campus alone is projected to bring more than 30,000 jobs to the city of Port St. Lucie.[7]

Port St. Lucie is served by the St. Lucie Transportation Planning Organization (TPO).[15] The TPO is a Metropolitan Planning Organization (MPO), a federally mandated and federally funded transportation policy-making organization responsible for transportation planning, programming, and financing of State and Federal Transportation Funds for the City of Port St. Lucie. The TPO is governed by a TPO Board, which is composed of elected officials, representatives from the St. Lucie County School Board, and representatives from Community Transit, a division of The Council on Aging of St. Lucie, Inc.[16] The original bus system started out as a demand response service bus in the 1990s, it only served St. Lucie County. Soon it expanded to a fixed route system, going to predetermined locations along a route. On June 3, 2002, the Florida Department of Transportation (FDOT)[17] approved funding, expanding the bus service to Martin County, and became the Treasure Coast Connector.[18]

U.S. 1 (State Road 5) almost runs parallel to Interstate 95, and runs from Key West to Jacksonville, where it crosses into Georgia at Folkston. Its route through the city extends from Lennard Road to Midway Road. 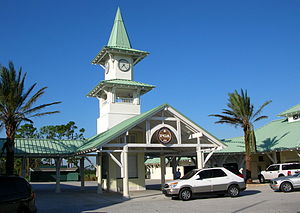 The city is home to New York Mets spring training, the St. Lucie Mets Florida State League team and the Mets rookie level team in the Gulf Coast League. All three play at Tradition Field. The Treasure Coast Galleons, a semi-pro soccer team also calls Port St. Lucie its home.The city also has two soccer clubs both with recreation and competitive play. Mako soccer club and the Port Saint Lucie soccer club are the stated soccer clubs. There is a golf complex, the PGA Village with 54 holes of golf, a learning center and a historical center. The city also hosted the Ginn Classic at Tesoro, the city's first ever PGA Tour Event, in 2007.[20] Port St. Lucie is also the home of the 2009 & 2011 National Champions in Pop Warner Football Pop Warner Little Scholars. The 2009 Jr. Midget team went 16 - 0 en route to winning the Pop Warner National Championship at Disney's Wide World of Sports Complex.[21] The 2011 Jr. Peewee team went 17 - 0 in winning the National Championship.[22]