Portable sawmills became popular in the United States starting in the 1970s, when the 1973 energy crisis and the back to the land movement had led to renewed interest in small woodlots and in self-sufficiency. Their popularity grew exponentially since 1982, when the first Wood-Mizer portable band sawmill was invented.

The first portable sawmills were the "One Man Farmer's Sawmills." These mills featured large circular blades and were marketed during the early twentieth century by companies like Sears, Montgomery Ward and JC Penney. These machines were all "private label" machines manufactured by the Belsaw Company.[1] Many early sawmills were designed to be belt-driven from a steam traction engine (which could also be used to transport the saw).

Prior to the advent of the portable 'mill, small-scale sawmills were generally cobbled-together affairs constructed and operated by (almost always) two men with a penchant for tinkering. This was, and remains, a traditional occupation for Amish men; unlike most mechanical systems, small sawmills typically do not use electricity.

More recently, with the invention of the Wood-Mizer in 1982,[2] portable bandsaw mills represented a dramatic shift in design. Unlike traditional mills, they used a thin-kerf blade of the type used on a band saw rather than a circular blade, which reduced weight and cost, and reduced the size and weight of the bearings and support blocks. The smaller kerf on these blades dramatically increased the yield from a given log. Use of band blades also allowed for a different design where the head, consisting of the blade and a power source, moves back and forth while the log remains stationary.[3] This is in contrast to traditional mills where the log moves on a trolley while the blade remains fixed. Aside from the original Wood-Mizer company, many companies now manufacture and sell personal and portable sawmills.[4]

Larger mills have recently come on the market which are portable only in sections. These cut faster and can handle larger logs but do require additional set up.[5]

Portable mills can be trailered and set up on site, next to the trees being cut. Some businesses transport their mill to harvest urban timber where moving the logs would be impractical.

Purchasing bandsaw blades and having them sharpened is more expensive than circular saw blades such as those used on a swingblade mill.

Most trailered mills position the log on top of the trailer, some models have hydraulic log loading arms and some do not, raising heavy logs without hydraulics can be a problem. There are portable mills with rails on the ground allowing a log to be positioned easily without hydraulics.

The portable mills can cut lumber with speed and accuracy, though the subsequent steps of planing and drying must still be performed to produce finished lumber. Commodity lumber in standard sizes can be made this way.

The more common use, however, is in the production of specialty timber products not readily available through lumber yards. The most common ways they are used to generate an income are - sawing lumber for customers as a mobile service, cutting and selling lumber locally, and cutting lumber that is directly used to create a final product.[6] Portable mills are particularly effective for truing up logs for use in log building, replacing the traditional use of a drawknife, which is inordinately time-consuming. They are also used for low-volume production of specialty hardwoods used in furniture, and can be used to produce the large timbers used in post-and-beam framing techniques.

Portable sawmill owners often use their mills to build their own projects,[7] finding that the money saved by producing their own lumber for their projects justifies the expense of the mill.

Portable mills have also been used in conjunction with salvage logging operations. In salvage logging, logs that were lost underwater during nineteenth-century river-borne log drives are recovered by divers. These logs are often worth many thousands of dollars. The thin kerf blade of the portable sawmill allows for much higher board foot yields from these valuable logs. 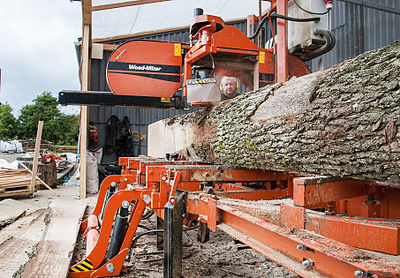 A portable sawmill enables small to medium-sized lumber producers the flexibility of cutting their own logs to their needs.

Timberjigs allow a chainsaw equipped with a ripping chain to be used like a sawmill.