Aesthetics (also spelled æsthetics) is commonly known as the study of sensory or sensori-emotional values; sometimes called judgments of sentiment and taste.[1] More broadly, scholars in the field define aesthetics as "critical reflection on art, culture and nature."[2][3] Aesthetics is a subdiscipline of axiology, a branch of philosophy, and is closely associated with the philosophy of art.[4] Aesthetics studies new ways of seeing and of perceiving the world.[5]

Romanticism is a complex artistic, literary, and intellectual movement that originated in the second half of the 18th century in Western Europe, and gained strength during the Industrial Revolution.[6] It was partly a revolt against aristocratic social and political norms of the Age of Enlightenment and a reaction against the scientific rationalization of nature, and was embodied most strongly in the visual arts, music, and literature.

The movement stressed strong emotion as a source of aesthetic experience, placing new emphasis on such emotions as trepidation, horror and awe—especially that which is experienced in confronting the sublimity of untamed nature and its picturesque qualities, both new aesthetic categories. It elevated folk art and custom to something noble, and argued for a "natural" epistemology of human activities as conditioned by nature in the form of language, custom and usage.

Arthur Coleman Danto (born 1924) is an American art critic, and professor of philosophy. Danto was born in Ann Arbor, Michigan, in 1924, and grew up in Detroit. After spending two years in the Army, Danto studied art and history at Wayne University (now Wayne State University) and then pursued graduate study in philosophy at Columbia University. From 1949 to 1950, Danto studied in Paris on a Fulbright scholarship under Maurice Merleau-Ponty, and in 1951 returned to teach at Columbia, where he is currently Johnsonian Professor of Philosophy Emeritus.

He is best known for his work in philosophical aesthetics and philosophy of history, though he has contributed significantly to a number of fields. His interests span thought, feeling, philosophy of art, theories of representation, philosophical psychology, Hegel's aesthetics, and the philosophers Maurice Merleau-Ponty and Arthur Schopenhauer. 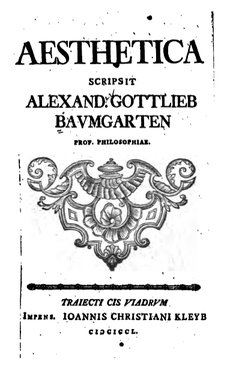 Baumgarten appropriated the word aesthetics, which had always meant sensation, to mean taste or "sense" of beauty. In so doing, he gave the word a different significance, thereby inventing its modern usage. The word had been used differently since the time of the ancient Greeks to mean the ability to receive stimulation from one or more of the five bodily senses.