Aviation, or air transport, refers to the activities surrounding mechanical flight and the aircraft industry. Aircraft includes fixed-wing and rotary-wing types, morphable wings, wing-less lifting bodies, parachutes, as well as lighter-than-air craft such as balloons and airships. Aviation began in the 18th century with the development of the hot air balloon, an apparatus capable of atmospheric displacement through buoyancy. Some of the most significant advancements in aviation technology came with the controlled gliding flying of Otto Lilienthal; then a largest step in significance came with the construction of the first powered airplane by the Wright brothers in the early 1900s. Since that time, aviation has been technologically revolutionized with the introduction of the jet which permitted a major form of transport throughout the world.

Zeppelin
A Zeppelin is a type of rigid airship pioneered by Count Ferdinand von Zeppelin in the early 20th century. Due to the outstanding success of the Zeppelin design, the term zeppelin in casual use came to refer to all rigid airships. The German defeat in World War I halted the business temporarily, but under the guidance of Hugo Eckener, the successor of the deceased count, civilian Zeppelins experienced a renaissance in the 1920s. They reached their zenith in the 1930s, when the airships LZ127 "Graf Zeppelin" and LZ129 "Hindenburg" profitably operated regular transatlantic passenger flights. The Hindenburg disaster in 1937 triggered the fall of the "giants of the air", though other factors, including political issues, contributed to the demise.
edit 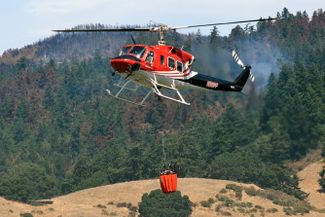 A Bell 212 Twin Huey carrying a helicopter bucket, a specialized bucket suspended on a cable to deliver water for helitack operations, which is aerial firefighting using helicopters. Helitack crews are used to attack a wildfire and gain early control of it, especially when inaccessibility would make it difficult or impossible for ground crews to respond in the same amount of time.

Template:/box-header ...that Chris Phatswe committed suicide by crashing his Air Botswana plane into two other planes belonging to the airline, effectively crippling operations?

...that the BAE Systems HERTI is the first and only fully autonomous UAV to have been certificated by the United Kingdom?

... that the PZL SM-4 Łątka never flew, because its engine was not approved for use in flight? Template:/box-footer

The Convair B-36 was a strategic bomber built by Convair for the United States Air Force, the first to have truly intercontinental range. Unofficially nicknamed the "Peacemaker", the B-36 was the first thermonuclear weapon delivery vehicle, the largest piston aircraft ever to be mass-produced, and the largest warplane of any kind.

The B-36 was the only American aircraft with the range and payload to carry such bombs from airfields on American soil to targets in the USSR, as storing nuclear weapons in foreign countries was diplomatically delicate. The nuclear deterrent the B-36 afforded may have kept the Soviet Army from fighting alongside the North Korean and Chinese armies during the Korean War. Convair touted the B-36 as an "aluminum overcast," a "long rifle" to give SAC a global reach. When General Curtis LeMay headed SAC (1949-57) and turned it into an effective nuclear delivery force, the B-36 formed the heart of his command. Its maximum payload was more than four times that of the B-29, even exceeding that of the B-52. 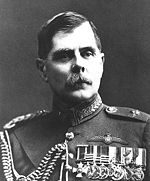 During his formative years Trenchard struggled academically, failing many examinations and only just succeeding in meeting the minimum standard for commissioned service in the British Army. As a young infantry officer, Trenchard served in India and in South Africa. During the Boer War, Trenchard was critically wounded and as a result of his injury, he lost a lung, was partially paralysed and returned to Great Britain. While convalescing in Switzerland he took up bobsleighing and after a heavy crash, Trenchard found that his paralysis was gone and that he could walk unaided. Some months later, Trenchard returned to South Africa before volunteering for service in Nigeria. During his time in Nigeria, Trenchard commanded the Southern Nigeria Regiment for several years and was involved in efforts to bring the interior under settled British rule and quell inter-tribal violence.

In 1912, Trenchard learned to fly and was subsequently appointed as second in command of the Central Flying School. He held several senior positions in the Royal Flying Corps during World War I, serving as the commander of Royal Flying Corps in France from 1915 to 1917. In 1918, he briefly served as the first Chief of the Air Staff before taking up command of the Independent Air Force in France. Returning as Chief of the Air Staff under Winston Churchill in 1919, Trenchard spent the following decade securing the future of the Royal Air Force. He was Metropolitan Police Commissioner in the 1930s and a defender of the RAF in his later years.