Conservatism is a political and social philosophy that promotes the maintenance of traditional values, accepting that technology and society can shift, but the principles should not. Some conservatives seek to preserve things as they are, emphasizing stability and continuity, while others oppose modernism and seek a return to the way things were. The first established use of the term in a political context was by François-René de Chateaubriand in 1819, following the French Revolution. Political science often credits the Irish politician Edmund Burke with many of the ideas now called conservative.Template:/box-footer

David William Donald Cameron (born 1966) is the current Prime Minister of the United Kingdom, First Lord of the Treasury, Minister for the Civil Service and Leader of the Conservative Party.

A first candidacy for Parliament at Stafford in 1997 ended in defeat, but Cameron was elected in 2001 as the Member of Parliament for the Oxfordshire constituency of Witney. He was promoted to the Opposition front bench two years later, and rose rapidly to become head of policy co-ordination during the 2005 general election campaign. With a public image of a young, moderate candidate who would appeal to young voters, he won the Conservative leadership election in 2005.

In the 2010 general election held on 6 May, the Conservatives gained a plurality of seats in a hung parliament and Cameron was appointed Prime Minister on 11 May 2010, at the head of a coalition between the Conservatives and the Liberal Democrats.

Conservative: One who admires radicals a century after they're dead. 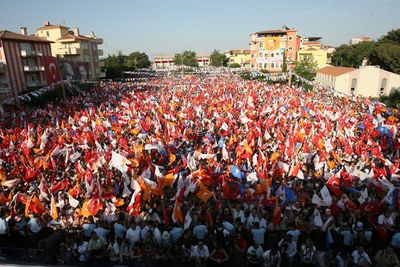 On April 14, 2007, an estimated 300,000 people marched in Ankara to protest the possible candidacy of Justice and Development Party leader Recep Tayyip Erdoğan in the Turkish 2007 presidential election, afraid that if elected as President, he would alter the secular nature of the Turkish state. The protests continued over the next several weeks, with over one million reported at an April 29 rally in Istanbul. Early parliamentary elections were called after the failure of the parties in parliament to agree on the next Turkish president. The opposition parties boycotted the parliamentary vote and deadlocked the election process. The AK Party achieved victory in the rescheduled July 22, 2007 elections with 46.6% of the vote, translating into control of 341 of the 550 available parliamentary seats.