Earth Science is the branch that deals with physical constitution of the Earth and its atmosphere. Earth sciences (also known as geoscience, the geosciences or Earth Science) is an all-embracing term for the sciences related to the planet Earth. They are a special type of planetary sciences which deal with the structure and composition of the Earth, its origins, physical features, changing aspects, and all of its natural phenomena. Earth is the only planet known to have life, and hence the only planet with biological processes and a biosphere.

The major disciplines of Earth sciences use physics, mathematics, and chemistry to build a quantitative understanding of the principal areas or spheres of the Earth system. As in many sciences, the Earth can be studied both experimentally and theoretically. Also, there are both reductionist and holistic approaches to Earth Science.

Although mining and precious stones have been in human interests throughout the history of civilization, their development into the sciences of economic geology and mineralogy did not occur until the 18th century. The study of the earth, particularly palaeontology, blossomed in the 19th century and the growth of other disciplines like geophysics in the 20th century led to the development of the theory of plate tectonics in the 1960s, which has had a similar impact on the Earth sciences as the theory of evolution had on biology. Earth sciences today are closely linked to climate research and the petroleum and mineral exploration industries.

Applications of Earth sciences include the exploration and exploitation of mineral and hydrocarbon resources, cartography, weather forecasting patterns, and warning of volcanic eruptions. Earth sciences are related to the environmental sciences as well as the other subfields of planetary astronomy.

The Chicxulub Crater is an ancient impact crater buried underneath the Yucatán Peninsula, with its center located near the town of Chicxulub, Yucatán, Mexico. The crater is over 180 kilometers (110 mi) in diameter, making the feature one of the largest confirmed impact structures in the world; the asteroid or comet whose impact formed the crater was at least 10 km (6 mi) in diameter. The crater was named for the nearby town, as well as for the literal Maya translation of the name: "tail of the devil." The crater was discovered by Glen Penfield, a geophysicist who had been working in the Yucatán while looking for oil during the late 1970s. The presence of tektites, shocked quartz and gravity anomalies, as well as the age of the rocks and isotope analysis, show that this impact structure dates from the late Cretaceous Period, roughly 65 million years ago. The impact associated with the crater is implicated in causing the extinction of the dinosaurs as suggested by the K–T boundary, although some critics disagree that the impact was the sole reason and also debate whether there was a single impact or whether the Chicxulub impactor was one of several that may have struck the Earth at around the same time. Recent evidence suggests that the impactor was a piece of a much larger asteroid which broke up in a collision more than 160 million years ago.
edit 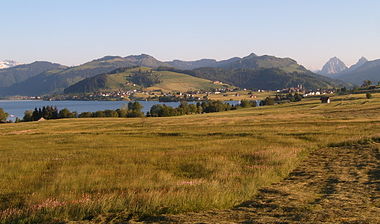 Northern shore meadows of Sihlsee, an artificial lake near Einsiedeln in the Canton of Schwyz, Switzerland.

Whether you are an expert or a novice, be bold, improve an article by editing it. If you're not sure how to do it, practice in the sandbox.

Views of Earth from space and satellites · Geology
Featured lists