Earth Science is the branch that deals with physical constitution of the Earth and its atmosphere. Earth sciences (also known as geoscience, the geosciences or Earth Science) is an all-embracing term for the sciences related to the planet Earth. They are a special type of planetary sciences which deal with the structure and composition of the Earth, its origins, physical features, changing aspects, and all of its natural phenomena. Earth is the only planet known to have life, and hence the only planet with biological processes and a biosphere.

The major disciplines of Earth sciences use physics, mathematics, and chemistry to build a quantitative understanding of the principal areas or spheres of the Earth system. As in many sciences, the Earth can be studied both experimentally and theoretically. Also, there are both reductionist and holistic approaches to Earth Science.

Although mining and precious stones have been in human interests throughout the history of civilization, their development into the sciences of economic geology and mineralogy did not occur until the 18th century. The study of the earth, particularly palaeontology, blossomed in the 19th century and the growth of other disciplines like geophysics in the 20th century led to the development of the theory of plate tectonics in the 1960s, which has had a similar impact on the Earth sciences as the theory of evolution had on biology. Earth sciences today are closely linked to climate research and the petroleum and mineral exploration industries.

Applications of Earth sciences include the exploration and exploitation of mineral and hydrocarbon resources, cartography, weather forecasting patterns, and warning of volcanic eruptions. Earth sciences are related to the environmental sciences as well as the other subfields of planetary astronomy.

April 6–8, 2006 tornado outbreak
The April 6–8, 2006 tornado outbreak was a major tornado outbreak in the Central and parts of the Southern United States that began on April 6, 2006 in the Great Plains and continued until April 8 in South Carolina, with most of the activity on April 7. The hardest-hit area was Middle Tennessee where several strong tornadoes devastated entire neighborhoods and left nine people dead. The worst damage took place in Gallatin, Tennessee. Other communities north of Nashville were also hard hit. There were 73 tornadoes confirmed across 13 states, with the bulk of them coming on the afternoon and evening of April 7 across the South, particularly in Tennessee. In total, 13 deaths were reported as a result of the severe weather (12 of them in Tennessee) and over $1.5 billion in damage was reported, of which over $630 million was in Middle Tennessee.[1] It was the third major outbreak of 2006, hot on the heels of a major outbreak on April 2. It was also considered to be the worst disaster event in Middle Tennessee since the Nashville tornado outbreak on April 16, 1998.
edit 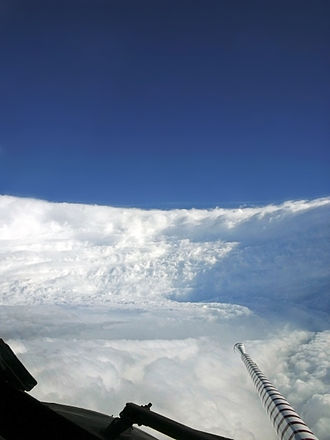 Hurricane Katrina was the third most powerful storm of the 2005 Atlantic hurricane season. It first made landfall as a Category 1 hurricane just north of Miami, Florida on August 25, 2005, then again on August 29 along the Central Gulf Coast near Buras-Triumph, Louisiana as a Category 4 storm. This photograph of the eye of the hurricane was taken from a NOAA Hurricane Hunter aircraft on August 28, 2005.

Whether you are an expert or a novice, be bold, improve an article by editing it. If you're not sure how to do it, practice in the sandbox.

Views of Earth from space and satellites · Geology
Featured lists