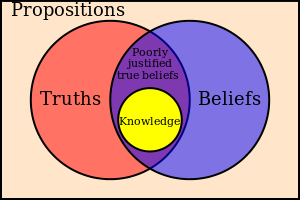 According to Plato, knowledge is a subset of that which is both true and believed

Epistemology or theory of knowledge is the branch of philosophy that studies the nature, methods, limitations, and validity of knowledge and belief.

The term "epistemology" is based on the Greek words "επιστήμη or episteme" (knowledge or science) and "λόγος or logos" (account/explanation). It was introduced into English by the Scottish philosopher James Frederick Ferrier (1808-1864).[1]

Much of the debate in this field has focused on analyzing the nature of knowledge and how it relates to similar notions such as truth, belief, and justification. It also deals with the means of production of knowledge, as well as skepticism about different knowledge claims. In other words, epistemology primarily addresses the following questions: "What is knowledge?", "How is knowledge acquired?", and "What do people know?".

"Naïve realism claims that the world is pretty much as common sense would have it. All objects are composed of matter, they occupy space, and have properties such as size, shape, texture, smell, taste and colour. These properties are usually perceived correctly. So, when we look at and touch things we see and feel those things directly, and so perceive them as they really are. Objects continue to obey the laws of physics and retain all their properties whether or not there is anyone present to observe them doing so."[2]

In contrast, indirect or representative realism claims that we are directly aware only of internal representations of the external world, as objects are hidden behind a "veil of perception". Idealism, on the other hand, asserts that no world exists apart from mind-dependent ideas.

Wang Yangming (王阳明, 1472–1529) was a Ming Chinese idealist Neo-Confucian philosopher, official, educationist, calligraphist and general. After Zhu Xi, he is commonly regarded as the most important Neo-Confucian thinker, with interpretations of Confucianism that denied the rationalist dualism of the orthodox philosophy of Zhu Xi. He was known as Yangming Xiansheng or Yangming Zi (both mean "Brilliant Master Yangming") in literary circles.

Born Wang Shouren (王 守仁) in Yuyao, Zhejiang Province, his courtesy name was Bo'an (伯安). His father was an earl and a minister of civil personnel. He earned the "recommended person" degree in 1492 and the "presented scholar" degree in 1499. He served as an executive assistant in various government departments until being banished for offending a eunuch in 1506.[3] However, his professional career was later ensured when he became the Governor of Jiangxi.[4]