France, officially the French Republic, is a country whose metropolitan territory is located in Western Europe and that also comprises a collection of overseas islands and territories located in North America, the Caribbean, South America, the Indian Ocean and the Pacific Ocean. France is the largest country in Western Europe (674,843 km² with its overseas départements). With a population of over 66 million inhabitants, France is the second most populous country in Western Europe (after Germany) and the 20th largest in the world. Paris is the most populous city in France with over 12 million people in its aire urbaine, Lyon is the second largest city with 2.2 million people, associated with Villeurbanne, and the third is Marseille with just 1.7 million people.

The French Republic is a democracy which is organised as a unitary semi-presidential republic. It has the fifth-largest economy in the world in nominal terms. Its main ideals are expressed in the Declaration of the Rights of Man and of the Citizen. France is one of the founding members of the European Union, and has the largest land area of all members. France is also a founding member of the United Nations, and a member of the G7, G8, NATO, and the Latin Union. It is one of the five permanent members of the United Nations Security Council wielding veto power, and it is also one of eight acknowledged nuclear powers. With almost 82 million foreign tourists each year, France is the most popular international tourist destination in the world.

French is the official language of France, but each region has its own unique accent; in addition to French, there are several other languages of France traditionally spoken, although use of these languages has greatly decreased over the past two hundred years. French is also an official language in 41 countries, most of which form what is called in French la Francophonie, the community of French-speaking nations. Template:/box-footer

Young Boulonnais stallion
The Boulonnais, also known as the "White Marble Horse", is a heavy draft horse breed. It is known for its large but elegant appearance and is usually gray, although chestnut and black are also allowed by the French breed registry. Originally there were several sub-types, but they were crossbred until only one is seen today. The breed's origins trace to a period before the Crusades and, during the 17th century, Spanish Barb, Arabian and Andalusian blood was added to create the modern type.

During the early 1900s, the Boulonnais were imported in large numbers to the United States and were quite popular in France; however, the European population suffered severe decreases during 20th century wars. The breed nearly became extinct following World War II, but rebounded in France in the 1970s as a popular breed for horse meat. Breed numbers remain low, with an estimation of less than 1,000 horses remaining in Europe, mostly in France with a few in other nations. Studies as early as 1983 indicated a danger of inbreeding within the Boulonnais population, and a 2009 report suggested that the breed should be a priority for conservation within France. The smallest type of Boulonnais was originally used to pull carts full of fresh fish from Boulogne to Paris, while the larger varieties performed heavy draft work, both on farms and in the cities. The Boulonnais was also crossbred to create and refine several other draft breeds. 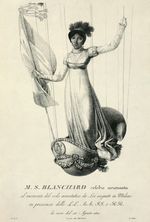 Sophie Blanchard (25 March 1778 – 6 July 1819) was a French aeronaut and the wife of ballooning pioneer Jean-Pierre Blanchard. Blanchard was the first woman to work as a professional balloonist, and after her husband's death she continued ballooning, making more than 60 ascents. Known throughout Europe for her ballooning exploits, Blanchard entertained Napoleon Bonaparte, who promoted her to the role of "Aeronaut of the Official Festivals", replacing André-Jacques Garnerin. On the restoration of the monarchy in 1814 she performed for Louis XVIII, who named her "Official Aeronaut of the Restoration".

Ballooning was a risky business for the pioneers. Blanchard lost consciousness on a few occasions, endured freezing temperatures and almost drowned when her balloon crashed in a marsh. In 1819, she became the first woman to be killed in an aviation accident when, during an exhibition in the Tivoli Gardens in Paris, she launched fireworks that ignited the gas in her balloon. Her craft crashed on the roof of a house and she fell to her death. She is commonly referred to as Madame Blanchard and is also known by many combinations of her maiden and married names. 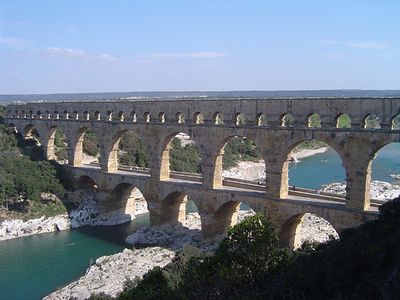 Pont du Gard, taken from the North Bank at the level of the water course.
Photo credit: ChrisOTemplate:/box-footer