Libertarianism is a set of related political philosophies that uphold liberty as the highest political end. This includes emphasis on the primacy of individual liberty, political freedom, and voluntary association. It is the antonym to authoritarianism. Libertarians advocate a society with either minimized government or no government at all.

The Free State Project (FSP) is a political movement, founded in 2001, to get at least 20,000 libertarian-leaning people to move to New Hampshire in order to make the state a stronghold for libertarian ideas.

Those who join the Free State Project sign a statement of intent to move to New Hampshire within five years of the group reaching 20,000 participants or some other move trigger. Those who move to New Hampshire in advance of the FSP reaching 20,000 participants are referred to as "early movers". As of April 2011, 901 people had moved to the state, with 10,826 having signed the Project's statement of intent. 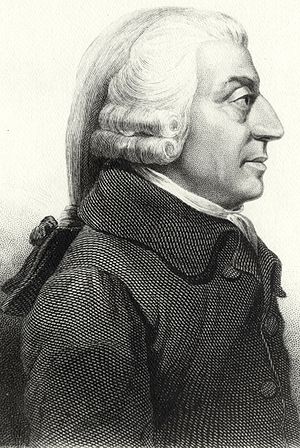 Adam Smith (baptised 16 June 1723 – died 17 July 1790 [OS: 5 June 1723 – 17 July 1790]) was a Scottish social philosopher and a pioneer of political economy. One of the key figures of the Scottish Enlightenment, Smith is the author of The Theory of Moral Sentiments and An Inquiry into the Nature and Causes of the Wealth of Nations. The latter, usually abbreviated as The Wealth of Nations, is considered his magnum opus and the first modern work of economics. It earned him an enormous reputation and would become one of the most influential works on economics ever published. Smith is widely cited as the father of modern economics and capitalism.

Smith studied social philosophy at the University of Glasgow and the University of Oxford. After graduating, he delivered a successful series of public lectures at Edinburgh, leading him to collaborate with David Hume during the Scottish Enlightenment. Smith obtained a professorship at Glasgow teaching moral philosophy, and during this time he wrote and published The Theory of Moral Sentiments. In his later life, he took a tutoring position that allowed him to travel throughout Europe, where he met other intellectual leaders of his day. Smith returned home and spent the next ten years writing The Wealth of Nations, publishing it in 1776. He died in 1790.