The National Register of Historic Places is the United States' official list of historic sites worthy of preservation which was authorized under the National Historic Preservation Act of 1966. There are around 84,000 listings of individual properties (sites, buildings, structures, and objects) and historic districts. The districts include, in turn, about 1,000,000 buildings, sites and structures. The Register automatically includes all 2,450 or so U.S. National Historic Landmarks designated by the U.S. Secretary of the Interior as well as the approximately 300 historic areas that are National Monuments declared by the U.S. president or National Historic Sites or other National Park Service areas authorized by the U.S. congress.

The National Register of Historic Places is primarily a tool to recognize the historical significance of a building, structure, object, site, or district. Listing in the National Register does not directly restrict private property owners from the use of their property. Some states, however, might have state or local laws that become effective when a place is listed on the National Register. In contrast, a local historic district often has enabling ordinances at the municipal level that restrict certain kinds of changes to properties and thereby encourages those changes that are sensitive to the historic character of an area.

Any individual can prepare a National Register nomination although historians and historic preservation consultants are often employed for this work. The nomination contains basic information on the type of significance embodied in the building, structure, object, district, or site. The State Historic Preservation Office receives National Register nominations and supplies feedback to the individual preparing the nomination. A description of the various aspects of social history and commerce, architectural styles and ownership of the property is also part of the nomination. Template:/box-footer

The Indiana Soldiers' and Sailors' Monument is a 284-feet tall neoclassical oolitic limestone and bronze monument in the center of Indianapolis (and Marion County, Indiana). It was erected to honor Hoosiers who were veterans of the American Revolution, territorial conflicts that partially led up to the War of 1812, the Mexican–American War, and the US Civil War. It was designed by German architect Bruno Schmitz, and was completed in 1901. In addition to its external commemorative statuary and fountains, the basement of the monument is the Colonel Eli Lilly Museum, a museum of Indiana history during the American Civil War. There is also an observation deck that can be reached by stairs for free or by elevator for a $1.00 charge.

The circle is the standard symbol of the city of Indianapolis, and the city's flag is an iconic representation of Monument Circle and the two streets (Meridian and Market) that feed into and out of it. One of Indy's recognizable nicknames, "the Circle City" comes from Monument Circle. At one time, it was illegal to build any building taller than the monument within Indianapolis city limits, although there are now many skyscrapers exceeding its size.

The poem America, Messiah of Nations was written by James Whitcomb Riley for the dedication of the monument and was transformed into a march by John Philip Sousa. Both Riley and Sousa performed the poem and march at the dedication ceremonies. Learn more... 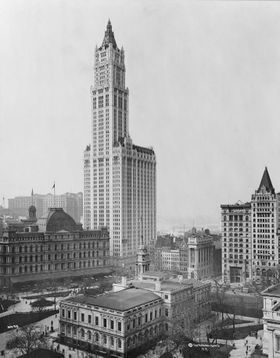 Second Leiter Building, designed by Jenney
William Le Baron Jenney (25 September 1832—14 June 1907) was an American architect and engineer who became known as the Father of the American skyscraper.

In 1867, Jenney moved to Chicago, Illinois and began his own architectural office, which specialized in commercial buildings and urban planning. During the late 1870s, he commuted weekly to Ann Arbor, Michigan to start and teach in the architecture program at the University of Michigan. In later years future leaders of the Chicago School like Louis Sullivan, Daniel Burnham, William Holabird, and Martin Roche, performed their architectural apprenticeships on Jenney's staff. Learn more...