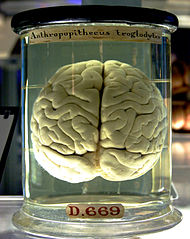 Neuroscience is a scientific discipline that studies the structure, function, development, genetics, biochemistry, physiology, pharmacology, pathology of the nervous system, and psychology. Traditionally it was seen as a branch of biological sciences. However, recently there has been a convergence of interest from other disciplines, including chemistry, computer science, statistics, physics, philosophy, mathematics, and medicine. The scope of neuroscience has now broadened to include any systematic scientific experimental and theoretical investigation of the central and peripheral nervous system of biological organisms. The methodologies employed by neuroscientists have been enormously expanded, from biochemical and genetic analysis of dynamics of individual nerve cells and their molecular constituents to imaging representations of perceptual and motor tasks in the brain.

Furthermore, neuroscience is at the frontier of investigation of the brain and mind. The study of the brain is becoming the cornerstone in understanding how we perceive and interact with the external world and, in particular, how human experience and human biology influence each other. It is likely that the study of the brain will become one of the central intellectual endeavors in the coming decades.

Addiction:An international team of scientists have found that the drug (+)-naloxone may be able to combat the addictive effects of opioids. By binding to the body's TLR4 immune receptors, substances like heroin no longer produce the dopamine needed to generate substance dependence yet retains the pain-relieving effect of these drugs. This means that if both morphine and (+)-naloxone are taken simultaneously, a patient will receive the necessary analgesic effect of the morphine but avoid the potential for addiction. The team hopes to soon begin clinical testing of this promising application. .[1]

Neurodegenerative Disease Based on a study involving primates, scientists may soon be able to employ genetic engineering to treat such devastating human diseases as Alzheimer's disease and Parkinson's. Studies reveal that a substance called human nerve growth factor, a naturally occurring protein, has beneficial effects on brain cells. When genetically engineered growth factor-producing cells were injected into the brains of monkeys, deterioration was reversed in up to 92 percent of diseased brain cells. [2]

Memory: A team of researchers led by Itzhak Fried, recording from electrodes implanted in the brains of human epileptic patients, found many neurons in the hippocampus that were activated both while viewing specific parts of video clips, and while recollecting the same episodes that activated them during viewing.[3]

Fibromyalgia: This chronic pain condition has been so difficult to study that some physicians have doubted that it really exists. A study published in the November issue of the Journal of Nuclear Medicine used SPECT imaging to examine brain activity of fibromyalgia sufferers with controls, and found that the patients showed enhanced blood flow in regions involved in discriminating pain, together with reduced blood flow in other regions. This supports other recent findings of measurable neural differences in fibromyalgia patients.[4]

Placebo: For many conditions, pharmacologically inactive treatments such as sugar pills may have effects in some people comparable to those of more potent treatments. A study by a group of Swedish researchers, published in the Journal of Neuroscience, shows that genetic factors may at least partly underlie individual differences in the effectiveness of placebo. People with specific variants of the serotonin transporter gene or the dopamine hydroxylase gene showed greater anxiety-reduction responses to a placebo treatment than people with other variants.[5]

...that nerve impulses can travel at 120 meters/second?

...that the amygdala plays an important role in the processing and memory of emotional reactions?

...that less than ten percent of the brain is made up of neurons? [6]

...that some neurons are over a meter long?

...that the cerebellum (the region behind the brainstem) contains half of the neurons in the brain?

...that when areas of the brain are damaged other areas can actually take over the job of the damaged area?

...that the size of the human brain has decreased by over 10% within the past few thousand years? [7]

...that oxytocin, one of the hormones responsible for triggering feelings of love in the brain, can help control symptoms of autism? [8]