Russia (Russian: Россия, Rossiya), also the Russian Federation (Rossiyskaya Federatsiya), is a Eurasian country extending over much of northern Eurasia. It is a semi-presidential republic comprising 85 federal subjects. From northwest to southeast, Russia shares borders with Norway, Finland, Estonia, Latvia, Lithuania and Poland (both via Kaliningrad Oblast), Belarus, Ukraine, Georgia, Azerbaijan, Kazakhstan, China, Mongolia, and North Korea. It also has maritime borders with Japan by the Sea of Okhotsk, Iran through the Caspian Sea, and the U.S. state of Alaska by the Bering Strait.

At 17,075,400 square kilometers, Russia is by far the largest country in the world, covering more than an eighth of the Earth’s land area; with 143 million people, it is the eighth largest by population. It extends across the whole of northern Asia and 40% of Europe, spanning 11 time zones and incorporating a great range of environments and landforms. Russia has the world's greatest reserves of mineral and energy resources, and is considered an energy superpower. It has the world's largest forest reserves and its lakes contain approximately one-quarter of the world's unfrozen fresh water.

Belarus is a landlocked country in Eastern Europe, that borders Russia to the north and east, Ukraine to the south, Poland to the west, and Lithuania and Latvia to the north. Its capital is Minsk; other major cities include Brest, Grodno, Gomel, Mogilev and Vitebsk. Until the 20th century, the Belarusians lacked the opportunity to create a distinctive national identity, since the lands of modern-day Belarus belonged to several countries, including the Duchy of Polatsk, the Grand Duchy of Lithuania, the Polish–Lithuanian Commonwealth, and the Russian Empire. After the short-lived Belarusian People's Republic (1918–19), Belarus became a constituent republic of the Soviet Union, the Byelorussian SSR. The final unification of Belarusian lands within its modern borders took place in 1939, when the ethnically Belarusian lands that were part of interwar Poland were annexed by the USSR and attached to the Soviet Belarus. The parliament of the republic declared the sovereignty of Belarus on July 27, 1990, and following the collapse of the Soviet Union, Belarus declared independence on August 25, 1991. Alexander Lukashenko has been the country's president since 1994. Since 1996, Belarus has been negotiating with Russia to unify into a single state called the Union of Russia and Belarus.
edit 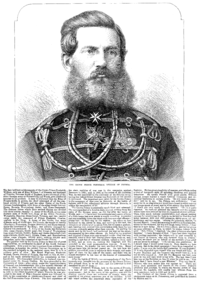 Crown Prince Frederick William of Prussia, later Frederick III, in the August 20, 1870 issue of the The Illustrated London News, during his time as commander of one of the three divisions of the German Army in the Franco-Prussian War. He was noted for his fondness for liberal democracy and pacifism, but died less than a year after he became king, before he could institute any real reforms. His death and replacement by his more militaristic son, without the reforms that might have impeded his son's urges, is often considered one of the factors that led to World War I. This engraving is based on a portrait photograph of him taken in Saint Petersburg, Russia.

Grand Duchess Anastasia Nikolaevna
Her Imperial Highness Grand Duchess Anastasia of Russia (Anastasia Nikolaevna Romanova) was the youngest daughter of Tsar Nicholas II of Russia, the last sovereign of Imperial Russia, and his wife Alexandra Fyodorovna. Anastasia was a younger sister of Grand Duchess Olga, Grand Duchess Tatiana and Grand Duchess Maria, and was an elder sister of Alexei Nikolaievitch, Tsarevitch of Russia. She was murdered with her family on July 17, 1918, by forces of the Bolshevik secret police. Rumors persisted of her possible escape since 1918, fueled by reports that two sets of remains, identified as Alexei Nikolaevich, Tsarevich of Russia, and either Anastasia or her elder sister Maria, were missing from a mass grave found near Ekaterinburg and later identified through DNA testing as the Romanovs. This has since been totally disproven. In January 2008 Russian scientists announced that the charred remains of a young boy and a young woman found near Ekaterinburg in August 2007 are most likely those of the thirteen-year-old Tsarevich and one of the four Romanov grand duchesses. Russian forensic scientists confirmed on April 30, 2008 that the remains were those of the Tsarevich Alexei and one of his four sisters. DNA information, made public in July 2008, that has been obtained from Ekaterinburg and repeatedly tested independently by laboratories such as the University of Massachusetts Medical School, USA, reveals that the final two missing Romanov remains are indeed authentic and that the entire Romanov family housed in the Ipatiev House, Ekaterinburg were executed in the early hours of 17 July 1918.