Science is the methodical study of nature including testable explanations and predictions. During the Middle Ages in the Middle East, foundations for the scientific method were laid by Alhazen in his Book of Optics. From classical antiquity through the 19th century, science as a type of knowledge was more closely linked to philosophy than it is now and, in fact, in the Western world, the term "natural philosophy" encompassed fields of study that are today associated with science, such as astronomy, medicine, and physics. While the classification of the material world by the ancient Indians and Greeks into Air, Earth, Fire and Water was more philosophical, medieval middle eastern scientists used practical, experimental observation to classify materials.

Today, the ever-evolving term "science" refers to the pursuit of knowledge, not the knowledge itself. It is often synonymous with "natural and physical science" and often restricted to those branches of study relating to the phenomena of the material universe and their laws. Although the term implies exclusion of pure mathematics, many university faculties include Mathematics Departments within their Faculty of Science. The dominant sense in ordinary use has a narrower use for the term "science." It developed as a part of science becoming a distinct enterprise of defining the "laws of nature"; early examples include Kepler's laws, Galileo's laws, and Newton's laws of motion. In this period it became more common to refer to natural philosophy as "natural science." Over the course of the 19th century, the word "science" became increasingly associated with the disciplined study of the natural world, including physics, chemistry, geology and biology. This sometimes left the study of human thought and society in a linguistic limbo, which was resolved by classifying these areas of academic study as social science. For example, psychology evolved from philosophy, and has grown into an area of study.

Currently, there are both "hard" (e.g. biological psychology) and "soft" science (e.g. social psychology) fields within the discipline. As a result, and as is consistent with the unfolding of the study of knowledge and development of methods to establish facts, each area of psychology employs a scientific method. Reflecting the evolution of the development of knowledge and established facts and the use of the scientific method, Psychology Departments in universities are found within: Faculty of Arts and Science, Faculty of Arts, and a Faculty of Science. Similarly, several other major areas of disciplined study and knowledge exist today under the general rubric of "science", such as formal science and applied science.

A space elevator is a hypothetical structure designed to transport material from a planet's surface into space. Many different types of space elevator structures have been proposed. They all share the goal of replacing rocket propulsion with the traversal of a fixed structure via a mechanism not unlike an elevator, hence its name, in order to move material into or beyond orbit. Space elevators have also sometimes been referred to as space bridges, beanstalks, space ladders or space lifts. The most common proposal is a tether (usually a cable or ribbon) that spans from the surface to a point beyond geosynchronous orbit. As the planet rotates, the inertia at the end of the tether counteracts gravity and keeps the tether taut. Vehicles can then climb the tether and escape the planet's gravity without the use of rockets. Such a structure could eventually permit delivery of great quantities of cargo and people to orbit, and at costs only a fraction of those associated with current means.
edit 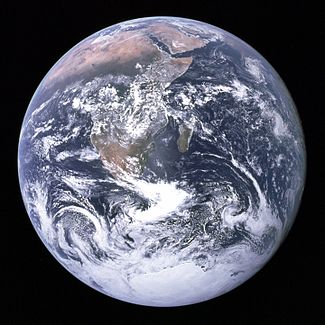 View of the Earth as seen by the Apollo 17 crew traveling toward the moon. This translunar coast photograph extends from the Mediterranean Sea area to the Antarctica south polar ice cap. This is toward the northeast. Earth, also known as Terra, and (mostly in the 19th century) Tellus, is the third-closest planet to the Sun. It is the largest of the solar system's terrestrial planets and the only planetary body that modern science confirms as harboring life. Scientific evidence indicates that the planet formed around 4.57 billion years ago, and shortly thereafter (4.533 billion years ago) acquired its single natural satellite, the Moon.

German pronunciation (help·info)) (March 14, 1879 – April 18, 1955) was a German-born theoretical physicist widely known as one of the greatest physicists of all time. He formulated the special and general theories of relativity. In addition, he made significant advancements to quantum theory and statistical mechanics. While best known for the Theory of Relativity (and specifically mass-energy equivalence, E=mc2), he was awarded the 1921 Nobel Prize for Physics for his 1905 (his "wonderful year" or "miraculous year") explanation of the photoelectric effect and "for his services to Theoretical Physics". In popular culture, the name "Einstein" has become synonymous with great intelligence and genius.

Among his many investigations were: capillary action, his special theory of relativity which stemmed from an attempt to reconcile the laws of mechanics with the laws of the electromagnetic field, his general theory of relativity which extended the principle of relativity to include gravitation, relativistic cosmology, critical opalescence, classical problems of statistical mechanics and problems in which they were merged with quantum theory, including an explanation of Brownian motion; atomic transition probabilities, the probabilistic interpretation of quantum theory, the quantum theory of a monatomic gas, the thermal properties of light with a low radiation density which laid the foundation of the photon theory of light, the theory of radiation, including stimulated emission; the construction of a unified field theory, and the geometrization of physics.