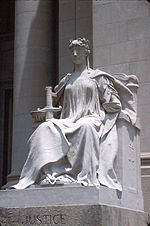 Social philosophy is the philosophical study of questions about social behavior (typically, of humans). Social philosophy addresses a wide range of subjects, from individual meanings to legitimacy of laws, from the social contract to criteria for revolution, from the functions of everyday actions to the effects of science on culture, from changes in human demographics to the collective order of a wasp's nest. Social philosophy attempts to understand the patterns and nuances, changes and tendencies of societies. It is a wide field with many subdisciplines.

Political philosophy is the study of questions about the city, government, politics, liberty, justice, property, rights, law and the enforcement of a legal code by authority: what they are, why (or even if) they are needed, what makes a government legitimate, what rights and freedoms it should protect and why, what form it should take and why, what the law is, and what duties citizens owe to a legitimate government, if any, and when it may be legitimately overthrown—if ever. In a vernacular sense, the term "political philosophy" often refers to a general view, or specific ethic, political belief or attitude, about politics that does not necessarily belong to the technical discipline of philosophy.

Political philosophy can also be understood by analysing it through the perspectives of metaphysics, epistemology and axiology thereby unearthing the ultimate reality side, the knowledge or methodical side and the value aspects of politics.

Three central concerns of political philosophy have been the political economy by which property rights are defined and access to capital is regulated, the demands of justice in distribution and punishment, and the rules of truth and evidence that determine judgments in the law.

A society is a body of humans generally seen as a community. or group of humans or other organisms of a single species that is delineated by the bounds of cultural identity, social solidarity, functional interdependence, or eusociality. Human societies are characterized by patterns of relationships between individuals that share a distinctive culture or institutions. Like other groups, a society allows its individual members to achieve individual needs or wishes that they could not fulfill separately by themselves, without the existence of the social group. Society, however, may be unique in that it is ontologically independent of, and utterly irreducible to, the qualities of its constituent individuals. As a reality sui generis, or "of its own kind", it is emergently composed of social facts that often hinder rather than help the pursuits of the subjects that form its physical and psychological underpinnings.

More broadly, a society is an economic, social or industrial infrastructure, made up of a varied multitude of individuals. Members of a society may be from different ethnic groups. A society may be a particular ethnic group, such as the Saxons; a nation state, such as Bhutan; a broader cultural group, such as a Western society; or even a social organism such as an ant colony. A Society is also a group of people who join or group together to have gatherings.

Charles-Louis de Secondat, baron de La Brède et de Montesquieu (Eng. /ˈmɒntəˌskju:/; 18 January 1689 in Bordeaux – 10 February 1755), was a French social commentator and political thinker who lived during the Era of the Enlightenment. He is famous for his articulation of the theory of separation of powers, taken for granted in modern discussions of government and implemented in many constitutions throughout the world. He was largely responsible for the popularization of the terms feudalism and Byzantine Empire.

After having studied at the Catholic College of Juilly, Charles-Louis de Secondat married. His wife, Jeanne de Lartigue,[dubious – discuss] a Protestant, brought him a substantial dowry when he was 26. The next year, he inherited a fortune upon the death of his uncle, as well as the title Baron de Montesquieu and Président à Mortier in the Parlement of Bordeaux. By that time, England had declared itself a constitutional monarchy in the wake of its Glorious Revolution (1688–89), and had joined with Scotland in the Union of 1707 to form the Kingdom of Great Britain. In 1715 the long-reigning Louis XIV died and was succeeded by the weaker and more feeble Louis XV. These national transformations impacted Montesquieu greatly; he would later refer to them repeatedly in his work.

–When a task is completed, please remove it from the list.