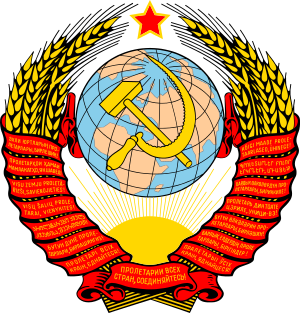 A gateway to everything about the former socialist and largest country in the world.

listen); abbreviated СССР, SSSR), was a constitutionally socialist state that existed in Eurasia between 1922 and 1991. Russia is the legal successor of the USSR.

The Soviet Union was a single-party state ruled by the Communist Party from its foundation until 1990. Even though the USSR was technically a union of 15 subnational Soviet republics, its government and economy were highly centralized.

The Russian Revolution of 1917 caused the downfall of the Russian Empire. Following the Russian Revolution, there was a struggle for power between the Bolshevik party, led by Vladimir Lenin, and the anti-communist White movement. In December 1922, the Bolsheviks won the civil war, and the Soviet Union was formed with the merger of the Russian Soviet Federative Socialist Republic, the Transcaucasian Socialist Federative Soviet Republic, the Ukrainian Soviet Socialist Republic and the Byelorussian Soviet Socialist Republic. Following the death of Vladimir Lenin in 1924, Joseph Stalin took power, leading the USSR through a large-scale industrialization program. Stalin established a planned economy and suppressed political opposition to him and the Communist party.

More about the Soviet Union…

"Tear down this wall!" was the challenge from United States President Ronald Reagan to Soviet leader Mikhail Gorbachev to destroy the Berlin Wall.

In a speech at the Brandenburg Gate near the Berlin Wall on June 12, 1987, commemorating the 750th anniversary of Berlin, Reagan challenged Gorbachev (who was then the General Secretary of the Communist Party of the Soviet Union), to tear it down as a symbol of Gorbachev's desire for increasing freedom in the Eastern Bloc. (More...) Template:/box-footer

Nikita Sergeyevich Khrushchev (April 15 [O.S. April 3] 1894 – September 11, 1971) led the Soviet Union during part of the Cold War. He served as First Secretary of the Communist Party of the Soviet Union from 1953 to 1964, and as Chairman of the Council of Ministers, or Premier, from 1958 to 1964. Khrushchev was responsible for the partial de-Stalinization of the Soviet Union, for backing the progress of the early Soviet space program, and for several relatively liberal reforms in areas of domestic policy. Khrushchev's party colleagues removed him from power in 1964, replacing him with Leonid Brezhnev as First Secretary and Alexei Kosygin as Premier.

Khrushchev was born in the Russian village of Kalinovka in 1894, close to the present-day border between Russia and Ukraine. He was employed as a metalworker in his youth, and during the Russian Civil War was a political commissar. With the help of Lazar Kaganovich, he worked his way up the Soviet hierarchy. He supported Joseph Stalin's purges, and approved thousands of arrests. In 1939, Stalin sent him to govern the Ukrainian Soviet Socialist Republic, and he continued the purges there. During what was known in the Soviet Union as the Great Patriotic War (Eastern Front of World War II), Khrushchev was again a commissar, serving as an intermediary between Stalin and his generals. Khrushchev was present at the bloody defense of Stalingrad, and he took great pride of this fact throughout his life. After the war, he returned to Ukraine before being recalled to Moscow as one of Stalin's close advisers.

The Soviet KGB was an essential part of the Soviet Union's internal security and intelligence.

Привет and welcome! Wikipedia is the encyclopedia that anyone can edit. If you are interested in the Soviet Union and have some information that can be added to an existing article, please help. Here are some things you can do: