The land forces fought for Portuguese independence against the Leonese and the Moors in the 12th century, against the Castilian invaders in the 14th century, against the Spanish Habsburgs in the 17th century, and against French invaders in the Peninsular War in the 19th century. They were re-trained by the British under the direction of Lieutenant General William Carr Beresford after the 1809 Battle of Corunna. The first major battle of the Anglo Portuguese army was the Battle of Bussaco in 1810, the success of which gave the inexperienced troops confidence in their abilities. The infantry and artillery went on to perform very well up until the final Battle of Toulouse (1814) when news arrived of Napoleon's abdication.

The army participated in colonial war from 1961 to 1974, in Angola, Goa, Mozambique, Portuguese Guinea and Cape Verde. At the other oversees possessions, East Timor and São Tomé and Príncipe, there was a military presence but no guerrilla organizations. In 1961, the isolated and relatively small Portuguese Army suffered a defeat against a largely superior Indian Army in the colony of Portuguese India, which was subsequently lost to the Union of India in the same invasion. The counterinsurgency campaigns in Africa had various degrees of success ranging from almost victory in Angola to total and conventional war in Portuguese Guinea. This war ended after the Carnation Revolution military coup of April 1974 in Lisbon and subsequently independence of the colonies.

After the independence of the colonies and the normalization of Portuguese political affairs the Portuguese army returned to the barracks and began the process of changing from an oversized colonial and counter-insurgency army to a conventional European army, including drastic personnel reduction, disbanding of some units, acquisition of new arms and equipment, reorganizing units and roles, fielding new headquarters and becoming fully professional. These took several decades and the defined purposes and roles have somehow changed due to external causes like the end of the Cold War as well internal causes like available budget, political changes and the acceptance and desires of the Portuguese people regarding its armed forces.

In the 21st century, the Portuguese Army has participated in several peace missions, including in Bosnia and Herzegovina, Kosovo, East-Timor, and Afghanistan – where it has a Comandos company deployed. In December 2005, a Portuguese commando died in an incident in Afghanistan when a bomb trap was detonated. 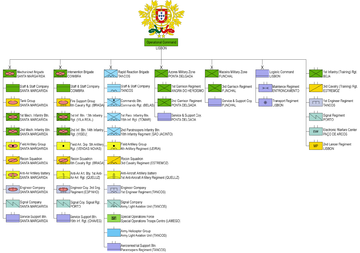 Operational Structure of the Portuguese Army.

The Portuguese Army is led by the Army Chief of Staff and includes: 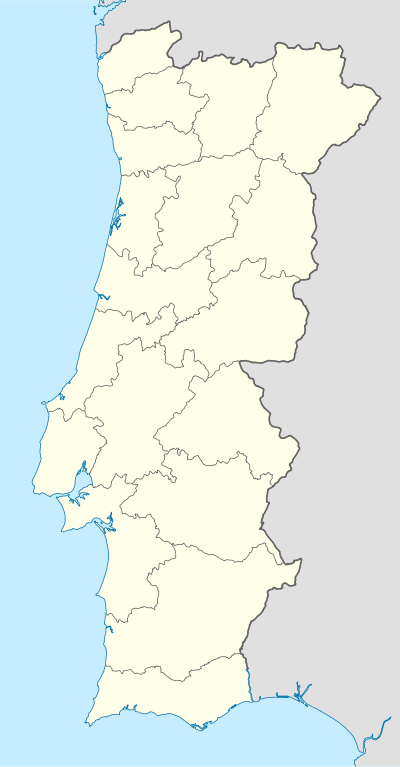 RAA1
Location of the main Army base units in Continental Portugal. Off-map to west are RG1 and RG2 (Azores) and RG3 (Madeira). Colors represent:

- Units of the Mechanized Brigade (BriMec)

- Units of the Intervention Brigade (BrigInt)

The Portuguese Army Base Structure units serve as administrative bases responsible for the cantonment and support of the operational units of the army's formations, military zones and general support forces. For historical reasons, most of the base units are called regiments and are associated with an arm of service. By arm of service, these units are: