Post-Keynesian economics[1] is a school of economic thought with its origins in The General Theory of John Maynard Keynes, although its subsequent development was influenced to a large degree by Michał Kalecki, Joan Robinson, Nicholas Kaldor, Paul Davidson and Piero Sraffa. Keynes's biographer Lord Skidelsky writes that the post-Keynesian school has remained closest to the spirit of Keynes's own work.[2][3]

The term post-Keynesian was first used to refer to a distinct school of economic thought by Eichner and Kregel (1975)[4] and by the establishment of the Journal of Post Keynesian Economics in 1978. Prior to 1975, and occasionally in more recent work, post-Keynesian could simply mean economics carried out after 1936, the date of Keynes's The General Theory.[5]

Post-Keynesian economists are united in maintaining that Keynes's theory is seriously misrepresented by the two other principal Keynesian schools: neo-Keynesian economics which was orthodox in the 1950s and 60s – and by New Keynesian economics, which together with various strands of neoclassical economics has been dominant in mainstream macroeconomics since the 1980s. Post-Keynesian economics can be seen as an attempt to rebuild economic theory in the light of Keynes's ideas and insights. However even in the early years post-Keynesians such as Joan Robinson sought to distance themselves from Keynes himself and much current post-Keynesian thought cannot be found in Keynes. Some Post Keynesians took an even more progressive view than Keynes with greater emphases on worker friendly policies and re-distribution. Robinson, Paul Davidson and Hyman Minsky were notable for emphasising the effects on the economy of the practical differences between different types of investments in contrast to Keynes' more abstract treatment.[6]

The theoretical foundation of post-Keynesian economics is the principle of effective demand, that demand matters in the long as well as the short run, so that a competitive market economy has no natural or automatic tendency towards full employment.[7] Contrary to the views of New Keynesian economists working in the neo-classical tradition, post-Keynesians do not accept that the theoretical basis of the market failure to provide full employment is rigid or sticky prices or wages. Post-Keynesians typically reject the IS/LM model of John Hicks, which was very influential in neo-Keynesian economics.[citation needed]

The contribution of post-Keynesian economics[8] has extended beyond the theory of aggregate employment to theories of income distribution, growth, trade and development in which money demand plays a key role, whereas in neoclassical economics these are determined by the forces of technology, preferences and endowment. In the field of monetary theory, post-Keynesian economists were among the first to emphasise that the money supply responds to the demand for bank credit,[9] so that the central bank cannot control the quantity of money, but only manage the interest rate by managing the quantity of monetary reserves.

This view has largely been incorporated into monetary policy, which now targets the interest rate as an instrument, rather than the quantity of money. In the field of finance, Hyman Minsky put forward a theory of financial crisis based on financial fragility, which has recently received renewed attention.[10]

There are a number of strands to post-Keynesian theory with different emphases. Joan Robinson regarded Michał Kalecki’s theory of effective demand to be superior to Keynes’s theories. Kalecki's theory is based on a class division between workers and capitalists and imperfect competition.[11] She also led the critique of the use of aggregate production functions based on homogeneous capital – the Cambridge capital controversy – winning the argument but not the battle.[12] The writings of Piero Sraffa were a significant influence on the post-Keynesian position in this debate, though Sraffa and his neo-Ricardian followers drew more inspiration from David Ricardo than Keynes. Much of Nicholas Kaldor’s work was based on the ideas of increasing returns to scale, path dependency, and the key differences between the primary and industrial sectors.[13]

Paul Davidson[14] follows Keynes closely in placing time and uncertainty at the centre of theory, from which flow the nature of money and of a monetary economy. Monetary circuit theory, originally developed in continental Europe, places particular emphasis on the distinctive role of money as means of payment. Each of these strands continues to see further development by later generations of economists, although the school of thought has been marginalized within the academic profession.

Modern Monetary Theory is a relatively recent offshoot influenced by the macroeconomic modelling of Wynne Godley and Hyman Minsky's ideas on the labour market, as well as chartalism and functional finance

In the United States, there are several universities with a post-Keynesian bent:

In Canada, post-Keynesians can be found at the University of Ottawa, and Laurentian University.

The University of Newcastle, in New South Wales, Australia, houses CofFEE, the Centre of Full Employment and Equity, an active educational, research and collaborative organisation whose focus is on policies "restoring full employment" and achieving an economy that delivers "equitable outcomes for all". CofFEE's work is on Post-Keynesian macroeconomics, labour economics, regional development and monetary economics. The aim of the research conducted by CofFEE is world class and is leading the clear path to developing successful model to a new global economy that achieves full employment without the consequences suffered by traditional neo-liberal economic policies. 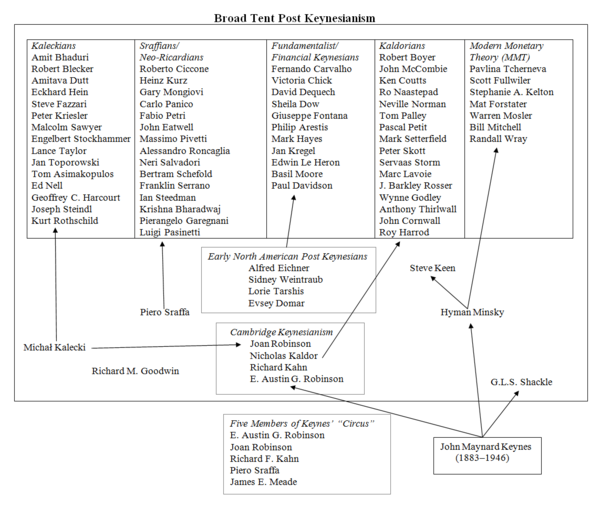 Major post-Keynesian economists of the first and second generations after Keynes include: