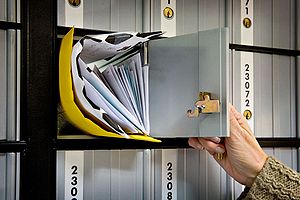 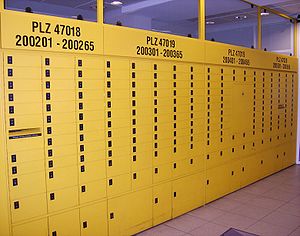 PO boxes of various sizes in a German post office, with their number range and postcodes written above them.

A post-office box or post office box (commonly referred to as a PO box or a postal box) is a uniquely addressable lockable box located on the premises of a post office station.

In many regions, particularly in Africa and the Middle East, there is no 'door to door' delivery of mail. For example, should one post mail to a street address in Namibia, it will be returned to sender as undeliverable.[1] Consequently, renting a PO box has traditionally been the only way to receive mail in such countries, although some, like Jordan, Egypt and Lebanon, do have mail home delivery.[2]

Generally, post office boxes are rented from the post office either by individuals or by businesses on a basis ranging from monthly to annual, and the cost of rent varies depending on the box size. Central business district (CBD) PO boxes are usually more expensive than rural PO boxes.

In the United States, the rental rate used to be[when?] uniform across the country. Now, however, a postal facility can be in any of seven fee groups by location; in addition, certain customers qualify for free box rental.

In the United Kingdom, Royal Mail PO boxes are often little more than pigeon-holes in the secure section of a sorting office, and are only accessible by staff. In such cases, the renter of the PO box will be issued with a card showing the PO box number and delivery office name, and must produce this to the desk staff when collecting mail. For an additional fee, the Royal Mail will deliver received items to the renter's geographical address.

Celebrities often have a PO box so that their fans can send them mail without knowing their street address.[citation needed]

The quantity of post office boxes in a station varies widely. Stations of small areas are often equipped with fewer than 100 boxes, while stations in a central business district (CBD) area may offer a combined quantity of over 100,000 post office boxes.[citation needed] 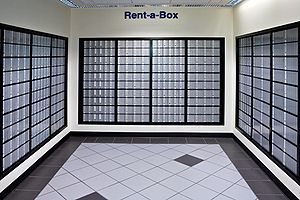 PO boxes in the lobby of a U.S. post office

Post office boxes are usually mounted in a wall of the post office, either an external wall or a wall in a lobby, so that staff on the inside may deposit mail in a box, while a key holder (some older post office boxes use a combination dial to open their box instead of a key) in the lobby or on the outside of the building may open his or her box to retrieve the mail.

In many post offices in the U.S., the PO box lobby is separate from the window-service lobby, so that the former may be kept open around the clock while the latter is locked after business hours. However, in the U.S. since the 1980s, in cities and large urban areas, post offices have tended to close box lobbies overnight because of the tendency of homeless people to use them for sleeping quarters. As a result, some box lobbies are accessible after-hours by customers who are provided a code to a door keypad. In addition, some post offices are located in rented facilities such as shopping malls. As a result, PO boxes can only be accessed while that facility is open.

If a parcel does not fit in a PO box, the postmaster will leave a note advising that customer to pick up that parcel from the counter. In some post offices, a key will be left in the PO box that corresponds to a larger, locked box (parcel locker) where the patron may pick up his or her package if a signature is not required. (Most often, in this case, once the key is used to open the larger, locked box, the key cannot be removed again by the patron, but the door cannot be secured either.) Notes will also be left in the PO box in respect of cash on delivery (COD) and registered mail that has to be signed for.

In 2011, the United States Postal Service began a pilot program called "gopost"[4] which installed larger boxes to handle package pickup from an unstaffed station. A given box can be used by multiple customers thanks to the integration of a computer which accepts a delivery code.[5][6] The system uses U.S. Patent 6,690,997, issued Feb 10, 2004 to Michael A. Rivalto. Deutsche Post started a similar concept called a Packstation in 2001.

Until 2012, package delivery to USPS post office boxes was not available from private carriers like UPS, FedEx and others. In early 2012, the Postal Service introduced a P.O. Box Street Address (PBSA) service that allows box-holders to combine the street address of the post office where their box is located with their post office box number into a street address format.[7][8][9] A mailing industry publication called the new service "a great service for people who already have a PO Box and don't want their packages delivered to their home."[10]

Users receiving very large quantities of mail can use "locked bags", which are numbered like PO boxes. In the United States, this service is called caller service, and the assigned number is called a caller number, although mail is typically addressed to "PO Box (caller number)."[11]

Each country has its own rules and regulations as to how one can retrieve mail at a PO Box. Some countries, such as the United States or the United Kingdom, may require one or more forms of identification. Not all countries offer locked PO Boxes.

In the United States, two forms of identification are required when signing up a for a PO Box; one of which must be a photo ID.

Many countries offer some type of PO Boxes for different uses. There are an increasing number of private companies that provide similar PO Box services to the official postal service privately under the guise of mail forwarding. 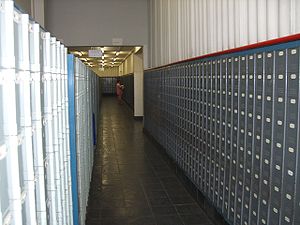 PO boxes inside the NamPost main building in Windhoek.

In Namibia, PO boxes are the only form of mail delivery to private individuals. Even small settlements feature a block of PO boxes for rent. In Windhoek, capital and the only large town, blocks of PO boxes are scattered all over the city and not necessarily located at post offices but at shopping malls, in pedestrian zones or on public places.

The South African Post Office has Post Boxes available for rent. These are usually attached to, or close to a post office. In urban areas with PO Boxes for rent there also maybe home delivery of mail. In rural areas Post Boxes are often compulsory as no street deliveries take place. In the area's that there is no street delivery, Post Boxes are not charged for. Boxes and Street delivery postal codes may be the same in an area, or may differ. Private Bags are available for recipients of large mail volumes. 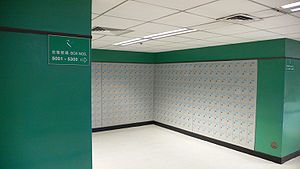 In Japan, PO boxes are available at most post office locations. There is no cost to rent a post office box, but the renter must be able to retrieve mail regularly (daily, in principle) from the box. The renter must also rent the box for 6 months or more.[12]

In Australia, wall-mounted PO boxes come in three sizes, which are designed so that different sizes can be mixed almost completely arbitrarily on the wall.

In New Zealand, users receiving very large quantities of mail can also use a Private Bag similar to "locked bags" in other countries.

In Austria, PO Boxes come in one size, and four different versions

Only mail from Austrian Post can be delivered to an Austrian Post PO Box,[14] but there are also private companies offering the same service but for example completely Anonymous or for parcels.

In the United Kingdom, anyone applying for a Royal Mail PO box must produce documentation to verify their home or business address. The Royal Mail will provide, on request, the geographical address relating to a PO box, unless local police have requested that the information be withheld.[citation needed]

In Canada, Postal Boxes are available in five different sizes (A, B, C, D & E). They are generally available in all post offices throughout the country.

In the United States, PO Boxes are generally available through the United States Postal Service (USPS). They are available in five different sizes. They are usually arranged from the smallest boxes at the top to the largest boxes at the bottom. The two largest sizes may be configured as drawers. To rent a PO Box, two different forms of identification are required. At least one of them must be a valid photo ID. As part of the agreement to rent a PO Box, if the PO Box is used for business, the Post Office will provide, upon request, the geographical (street) address of the business.

Until recently,[when?] only items mailed or shipped via USPS could be received at a USPS PO Box. However, a new service called Street Addressing is beginning to change this. Once a permission form is completed by the box holder, Street Addressing allows private shippers, such as United Parcel Service (UPS) or FedEx, to ship items to a modification of the actual street address of the Post Office where the PO Box is located. The Post Office accepts the item, and places it in the PO Box or, for larger items, handles them the same way they would a package sent via USPS. (Some have storage lockers.) Only certain Post Offices offer Street Addressing, and even for ones that do, it may not be available to all of its PO Box customers (e.g. boxes without a fee). Other restrictions also exist, including the same limitations on items that cannot otherwise be mailed though USPS. In many cases, the package may require one additional business day for delivery, and the service was never intended for overnight delivery from private shippers. The last four digits of the zip code +4 are in sequence with neighboring buildings along the same street as the post office, and not '9998,' which is reserved for USPS business matters only. This even applies to larger post offices that give a unique zip code to its PO Box holders. Using Street Addressing, all box holders will use the same zip code, and the first five digits will be that of the community, and not the one used exclusively for PO Boxes.