Post-production, or postproduction, is part of the process of filmmaking, video production and photography. It occurs in the making of motion pictures, television programs, radio programs, advertising, audio recordings, photography, and digital art. It is a term for all stages of production occurring after shooting or recording individual program segments.[1]

Traditional (analogue) post-production has been eroded away by video editing software that operates on a non-linear editing system (NLE). 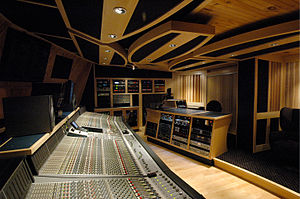 Post-production is many different processes grouped under one name. These typically include:

The post-production phase of creating a film usually takes longer than the actual shooting of the film, and can take several months to complete because it includes the complete editing, colour correction and the addition of music and sound. The process of editing a movie is also seen as the second directing because through post-production it is possible to change the intention of the movie. Furthermore, through the use of color grading tools and the addition of music and sound, the atmosphere of the movie can be heavily influenced. For instance a blue-tinted movie is associated with a cold atmosphere and the choice of music and sound increases the effect of the shown scenes to the audience.

Post-production was named a 'Dying Industries' by Phil Izzo.[2] The once exclusive service offered by high end post-production facilities have been eroded away by video editing software that operates on a non-linear editing system (NLE). As such, traditional (analogue) post-production services are being surpassed by digital, leading to sales of over $6 billion annually.[3]

In television, the phases of post-production include: editing, video editing, sound editing, animation and visual effects insertions, viewing and the start of the airing process. It is imperative that post-production executes and oversees the preparation until the final product is completely ready.

Professional post-producers usually apply a certain range of image editing operations to the raw image format provided by a photographer or an image-bank. There is a range of proprietary and free and open-source software, running on a range of operating systems available to do this work.

The first stage of post-production usually requires loading the RAW images into the post-production software. If there is more than one image, and they belong to a set, ideally post-producers try to equalize[further explanation needed] the images before loading them. After that, if necessary, the next step would be to cut the objects in the images with the Pen Tool for a perfect and clean cut. The next stage would be cleaning the image using tools such as the healing tool, clone tool and patch tool.

The next stages depend on what the client ordered. If it's a photo-montage, the post-producers would usually start assembling the different images into the final document, and start to integrate the images with the background.

In advertising it usually requires assembling several images together in a photo-composition.

Techniques used in music post-production include comping (compiling the best portions of multiple takes into one superior take), timing and pitch correction (perhaps through beat quantization), and adding effects. This process is typically referred to as mixing and can also involve equalization and adjusting the levels of each individual track to provide an optimal sound experience.[4] Contrary to the name, post-production may occur at any point during recording and production process and is non-linear and nonveridic.[4]