From Infogalactic: the planetary knowledge core
Jump to: navigation, search
For one of its specific applications, see Postpositivism (international relations). 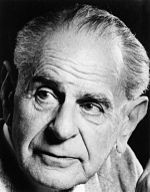 Postpositivists believe that human knowledge is based not on unchallengeable, rock-solid foundations, but rather upon human conjectures. As human knowledge is thus unavoidably conjectural, the assertion of these conjectures are warranted, or more specifically, justified by a set of warrants, which can be modified or withdrawn in the light of further investigation. However, postpositivism is not a form of relativism, and generally retains the idea of objective truth.

Postpositivists believe that a reality exists, like positivists do, though they hold that it can be known only imperfectly and probabilistically.[1]

One of the first thinkers to criticize logical positivism was Sir Karl Popper. He advanced falsification in lieu of the logical positivist idea of verifiability. Falsificationism argues that it is impossible to verify that beliefs about universals or unobservables are true, though it is possible to reject false beliefs if they are phrased in a way amenable to falsification. Thomas Kuhn's idea of paradigm shifts offers a broader critique of logical positivism, arguing that it is not simply individual theories but whole worldviews that must occasionally shift in response to evidence.

Postpositivism is an amendment to positivism that recognizes these and other critiques against logical positivism. It is not a rejection of the scientific method, but rather a reformation of positivism to meet these critiques. It reintroduces the basic assumptions of positivism: ontological realism, the possibility and desirability of objective truth, and the use of experimental methodology. The work of philosophers Nancy Cartwright and Ian Hacking are representative of these ideas.[citation needed] Postpositivism of this type is common in the social sciences (especially sociology) for both practical and conceptual reasons.[citation needed]