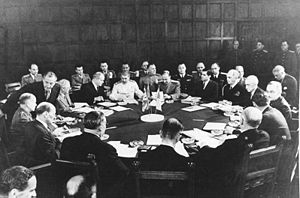 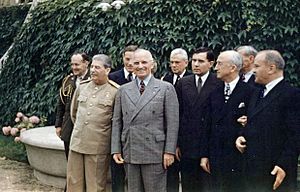 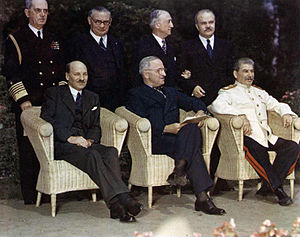 The Potsdam Conference was held at Cecilienhof, the home of Crown Prince Wilhelm Hohenzollern, in Potsdam, occupied Germany, from 17 July to 2 August 1945. (In some older documents it is also referred to as the Berlin Conference of the Three Heads of Government of the USSR, USA and UK.[2][3]) Participants were the Soviet Union, the United Kingdom and the United States. The three powers were represented by Communist Party General Secretary Joseph Stalin, Prime Ministers Winston Churchill[4] and, later, Clement Attlee,[5] and President Harry S. Truman.

Stalin, Churchill, and Truman—as well as Attlee, who participated alongside Churchill while awaiting the outcome of the 1945 general election, and then replaced Churchill as Prime Minister after the Labour Party's defeat of the Conservatives—gathered to decide how to administer the defeated Nazi Germany, which had agreed to unconditional surrender nine weeks earlier, on 8 May (V-E Day). The goals of the conference also included the establishment of post-war order, peace treaty issues, and countering the effects of the war.

Relationships amongst the leaders

In the five months since the Yalta Conference, a number of changes had taken place which would greatly affect the relationships between the leaders.

1. The Soviet Union was occupying Central and Eastern Europe
By July, the Red Army effectively controlled the Baltic states, Poland, Czechoslovakia, Hungary, Bulgaria and Romania, and fearing a Stalinist take-over, refugees were fleeing from these countries. Stalin had set up a communist government in Poland. He insisted that his control of Eastern Europe was a defensive measure against possible future attacks and claimed that it was a legitimate sphere of Soviet influence.[6]

2. Britain had a new Prime Minister
The results of the British election became known during the conference. As a result of the Labour Party victory over the Conservative Party the leadership changed hands. Consequently, British Prime Minister Clement Attlee assumed leadership following Winston Churchill, whose Soviet policy since the early 1940s had differed considerably from former US President Roosevelt's, with Churchill believing Stalin to be a "devil"-like tyrant leading a vile system.[7]

3. The United States had a new president, and the war was ending
President Roosevelt died on 12 April 1945, and Vice-President Harry Truman assumed the presidency; his succession saw VE Day (Victory in Europe) within a month and VJ Day (Victory in Japan) on the horizon. During the war and in the name of Allied unity, Roosevelt had brushed off warnings of a potential domination by a Stalin dictatorship in part of Europe. He explained that "I just have a hunch that Stalin is not that kind of a man," and reasoned, "I think that if I give him everything I possibly can and ask for nothing from him in return, 'noblesse oblige,' he won't try to annex anything and will work with me for a world of democracy and peace."[8]

While inexperienced in foreign affairs, Truman had closely followed the allied progress of the war. George Lenczowski notes "despite the contrast between his relatively modest background and the international glamour of his aristocratic predecessor, [Truman] had the courage and resolution to reverse the policy that appeared to him naive and dangerous," which was "in contrast to the immediate, often ad hoc moves and solutions dictated by the demands of the war."[9] With the end of the war, the priority of allied unity was replaced with a new challenge, the nature of the relationship between the two emerging superpowers.[9]

Truman became much more suspicious of communist moves than Roosevelt had been, and he became increasingly suspicious of Soviet intentions under Stalin.[9] Truman and his advisers saw Soviet actions in Eastern Europe as aggressive expansionism which was incompatible with the agreements Stalin had committed to at Yalta the previous February. In addition, it was at the Potsdam Conference that Truman became aware of possible complications elsewhere, when Stalin objected to Churchill's proposal for an early Allied withdrawal from Iran, ahead of the schedule agreed at the Tehran Conference. However, the Potsdam Conference marks the first and only time Truman would ever meet Stalin in person.[10][11]

Agreements made between the leaders at Potsdam 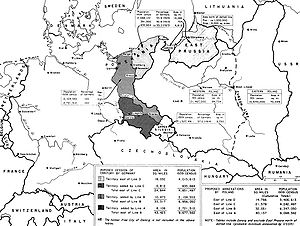 Demographics map used for the border discussions at the conference

At the end of the conference, the three Heads of Government agreed on the following actions. All other issues were to be answered by the final peace conference to be called as soon as possible.

Allied Chiefs of Staff at the Potsdam Conference decided to temporarily partition Vietnam at the 16th parallel (just North of Da Nang) for the purposes of operational convenience.

It was agreed that British forces would take the surrender of Japanese forces in Saigon for the southern half of Indochina, whilst Japanese troops in the northern half would surrender to the Chinese. 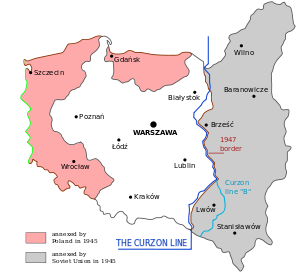 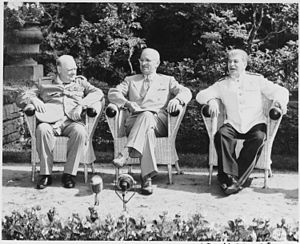 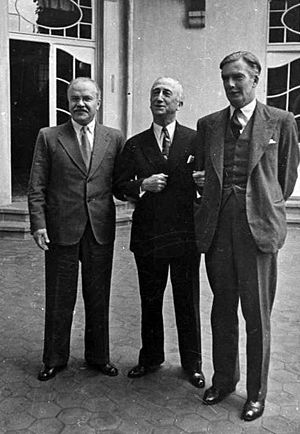 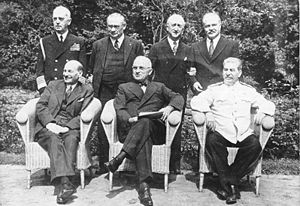 In addition to the Potsdam Agreement, on 26 July, Churchill, Truman, and Chiang Kai-shek, Chairman of the Nationalist Government of China (the Soviet Union was not at war with Japan) issued the Potsdam Declaration which outlined the terms of surrender for Japan during World War II in Asia.

Truman had mentioned an unspecified "powerful new weapon" to Stalin during the conference. Towards the end of the conference, Japan was given an ultimatum to surrender (in the name of the United States, Great Britain and China) or meet "prompt and utter destruction", which did not mention the new bomb. Prime minister Kantarō Suzuki did not respond[14] (mokusatsu, which was interpreted as a declaration that the Empire of Japan should ignore the ultimatum). Therefore, the United States dropped atomic bombs on Hiroshima on August 6 and Nagasaki on August 9, 1945. The justification was that both cities were legitimate military targets, to end the war swiftly, and preserve American lives. However, to some the timing has suggested that Truman did not want Stalin involved in the terms of Japan's surrender. It is important to note that Truman delayed the Potsdam Conference in order to be sure of the functionality of this "powerful new weapon."