The district is governed by an all-volunteer board of trustees appointed by city and county officials. The current board, composed of seven experienced community leaders, began its work immediately after being appointed in March, 2007. The board is responsible for guiding the transition from a city library system to a broader library district; for overseeing library operations; and for developing a long-range vision for the district. 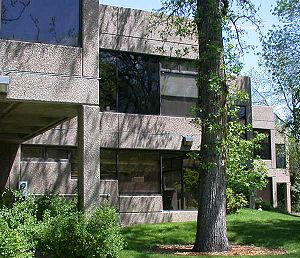 The Poudre River Public Library District was formerly known as both the Fort Collins Public Library and the Fort Collins Regional Library District. The library as an institution dates from the late 19th century when a collection was housed on South College Avenue in downtown. In 1903, the library acquired its first dedicated structure by a donation from philanthropist Andrew Carnegie.[2] It was the sixth public library in the state. The Carnegie Library building, located in Library Park (formerly Lincoln Park) was used to house the library collection until 1974, when the current Old Town Library (formerly Main Library[3]) was constructed on the east side of Library Park. The former Carnegie Library now houses the Fort Collins Museum. In 1998 a second branch, Harmony Library, was constructed on Harmony Road in southwest Fort Collins. Harmony Library is a joint-use facility operated by Front Range Community College and the library district.[4] In 2009 the district opened a third branch, Council Tree Library, in southeast Fort Collins at Front Range Village Shopping Center.

The district has an extensive collection on the history of Fort Collins and Larimer County. The district maintains the Barton Early Childhood Center and participates in innovative cooperative projects with the Poudre School District and Colorado State University. The library holds about 270,000 items; its special local history archive moved to nearby Fort Collins Museum from April 1, 2007.