The PowerPC 970, PowerPC 970FX, PowerPC 970GX, and PowerPC 970MP, are 64-bit Power Architecture processors from IBM introduced in 2002. When used in Apple Inc. machines, they were dubbed the PowerPC G5.

The 970 family was created through a collaboration between IBM and Apple.[1][2] The project went under the codename GP-UL or Giga Processor Ultra Light, where Giga Processor was the codename for the POWER4 from which the core was derived. When Apple introduced the Power Mac G5, they stated that this was a five-year collaborative effort, with multiple future generations, but it was short-lived. Apple had to retract the promise to deliver a 3 GHz processor one year after its introduction, and IBM could never get the power consumption down far enough for these processors to fit into a portable computer. Apple only used three variants of the processor.

IBM’s JS20/JS21 blade modules and some low-end workstations and System p servers are based on PowerPC 970. It is also used in some high end embedded systems like Mercury’s Momentum XSA-200. IBM is also licensing the PowerPC 970 core for use in custom applications. A common misconception is that the PowerPC 970 was the core in IBM's Xenon processor in Microsoft's Xbox 360, but this is false. That processor is using cores similar to the Power Processing Element (PPE) in the Cell microprocessor. 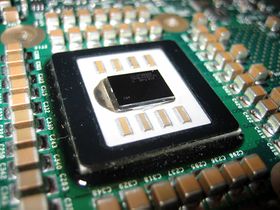 The PowerPC 970 is a single core derivative of the POWER4 and can process both 32-bit and 64-bit PowerPC instructions natively. It has a hardware prefetch unit and a three way branch prediction unit.

Like the POWER4, the front-end is nine stages long. The PowerPC 970 can fetch and decode up to eight instructions, dispatch up to five to reserve stations, issue up to eight to the execution units and retire up to five per cycle. The execution pipelines were lengthened compared to the POWER4 to achieve higher clock frequencies. It has eight execution units: two arithmetic logic units (ALUs), two double precision floating-point units, two load/store units and two AltiVec units.[3]

The processor has two unidirectional 32-bit double data rate (DDR) buses (one for reads, the other for writes) to the system controller chip (northbridge) running at one quarter of the processor core speed. The buses also carry addresses and control signals in addition to data so only a percentage of the peak bandwidth can be realized (6.4 GB/s at 450 MHz). As the buses are unidirectional, each direction can realize only half the aggregate bandwidth, or 3.2 GB/s.[3]

The PowerPC 970 was announced by IBM in October 2002. It was released in Apple Computer's Power Mac G5 in June 2003 (in keeping with its previous naming conventions, Apple termed the PowerPC 970 based products G5, for the fifth generation of PowerPC microprocessors). IBM released its first PowerPC 970 blade servers, the BladeCenter JS20, in November 2003.

The PowerPC 970's pipeline was lengthened from 9 stages to 16 - 21 stages for the PowerPC 970 FX. It has 10 functional units - 2 Fixed-Point Units, 2 Load/Store Units, 2 Floating Point Units, 1 Branch Unit, 1 SIMD ALU unit, 1 SIMD Permute unit, and 1 Condition Register. It supports up to 215 instructions in-flight: 16 in the Instruction Fetch Unit, 67 in the Instruction Decode Unit, 100 in the Functional Units, and 32 in the Store Queue. It has 64 KBytes of directly-mapped Instruction Cache and 32 KBytes of D-Cache.[5]

Apple released their 970FX-powered machines throughout 2004: the Xserve G5 in January, the Power Mac G5 in June, and the iMac G5 in August. The Power Mac introduced a top clock speed of 2.5 GHz while liquid-cooled (eventually reaching as high as 2.7 GHz in April 2005). The iMac ran the front side bus at a third of the clock speed.

Despite intense user demand for a faster laptop CPU than the G4, Apple never used a G5 series CPU in their PowerBook laptops. The original 970 used far too much power and was never seriously viewed as a candidate for a portable computer. The 970FX reduced thermal design power (TDP) to about 30 W at 1.5 GHz, a figure which led many users to believe a PowerBook G5 might be possible. However, several obstacles prevented even the 970FX from being used in this application. At 1.5 GHz, the G5 was not substantially faster than the 1.5 and 1.67 GHz G4 processors which Apple used in PowerBooks instead. Furthermore, the northbridge chips available to interface the 970FX to memory and other devices were not designed for portable computers, and consumed too much power. Finally, the 970FX had inadequate power saving features for a portable CPU. Its minimum (idle) power was much too high, which would have led to poor battery life figures in a notebook computer.[citation needed]

Due to high power requirements, IBM has chosen to discontinue parts running faster than 2.0 GHz.

Illustrations of the different generations of 970 processors. All are manufactured in IBM's East Fishkill plant in New York on a white ceramic substrate which was typical for IBM's high end processors of the era.

There are two dedicated northbridges for PowerPC 970-based computers, both manufactured by IBM:

There was also a cancelled CPC965 northbridge. Slated for release in 2007, it was to be a uniprocessor-only northbridge. Its features were a 533 MHz DDR2 controller that supported up to 8 GB ECC memory, a 8x PCIe bus, integrated four-port Gigabit Ethernet with IPv4 TCP/UDP offloading, USB 2.0 ports, a Flash-interface. The northbridge contains an integrated PowerPC 405 core to provide system management and configuration capabilities.[9]

IBM uses its proprietary Elastic interface bus in the modules.