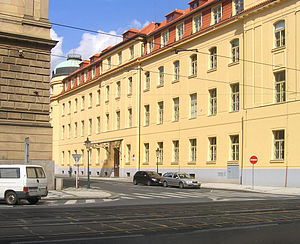 Main building of the Prague Conservatory

Prague Conservatory offers instruction in playing several instruments including accordion, guitar, piano, and organ, as well as in singing, composing, conducting, and acting. The curriculum includes specialized theoretical studies, language education as well as general education. The institution has its own symphonic and chamber orchestras, several chamber music ensembles, and a theater company. About 250 concerts and 40 dramatic performances are held annually.

In the academic year of 2005/2006, approximately 550 Czech and 40 foreign students studied at the Conservatory.

The Prague Conservatoire was founded in 1808 by local aristocrats and burghers. Classes first started in 1811, after a delay caused by Napoleonic Wars. Bedřich Diviš Weber was appointed the first director of the school.

In 1891, Antonín Dvořák joined the faculty as the head of the composition department. He was the school's director between 1901 and 1904. Dvořák's students included the composers Vítězslav Novák, Josef Suk (later served as director of the Conservatory), Rudolf Friml, Oskar Nedbal, and Franz Lehár.

Following the creation of Czechoslovakia in 1918, drama and ballet departments were established. Among others, Lída Baarová (drop-out), Jiří Langmajer, Tatiana Vilhelmová (drop-out), Filip Blažek, and Zuzana Vejvodová studied there. Katya Zvelebilova began classical ballet training at the conservatoire before joining the Royal Ballet School in London, where she is now a member of the Artistic Staff having retired from professional ballet.