Praia (Portuguese pronunciation: [ˈpɾajɐ], meaning "beach", in both Portuguese and Cape Verdean Creole), is the capital and largest city of Cape Verde, an island nation in the Atlantic Ocean west of Senegal. It lies on the southern coast of Santiago island in the Sotavento Islands group. It is the island's ferry port and is home to one of the nation’s four international airports. The city centre is known as Platô due to its location on a small plateau.

Praia is Cabo Verde's largest city, a commercial centre, and a port that ships coffee, sugar cane, and tropical fruits. Praia also has a fishing industry and there are resort beaches nearby. It is the seat of the Praia municipality.

The town of Praia de Santa Maria appeared in 1615 when it took the place of the previous settlement on the plateau, which was originally favored because the nearby port (Santa Maria beach) offered good conditions for ships. Initially used as a clandestine harbor (in order to avoid customs fees at the then capital Ribeira Grande), the settlement gradually acquired the characteristics of a town after much of the population from Ribeira Grande fled there during its decline in the midst of frequent pirate attacks. The official transfer of capital status from Ribeira Grande to Praia took place in 1770.

A depiction of Praia during the Battle of Porto Praya.

In the history of Cabo Verde there have been successive proposals for transferring the capital elsewhere, the most recent being Mindelo in the late 19th century. However, the successive Portuguese administrations never showed an interest (economical or political?) in such proposals. Through an official decree in 1858, when its status was changed from town to city, Praia secured its status as the capital of Cabo Verde, concentrating political, religious and economic roles. 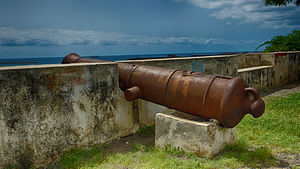 During the Portuguese administration, only the central plateau was considered to be the city proper and thus the principal zone of urbanization and concentration of municipal services. It was only after independence (July 1975) that the surrounding neighborhoods generally became accepted as part of the city proper.

After independence, the Praia underwent a demographic boom. After 33 years its population had quadrupled, receiving migrating movements from all the islands. As a result, half of the entire population of Cabo Verde currently resides in Santiago; a fourth in the Municipality of Praia; and a fifth in the City of Praia alone. 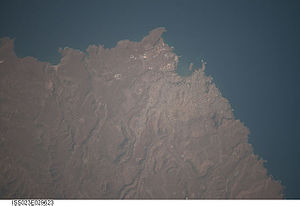 An aerial view of Praia.

Geographically, Praia may be described as a set of plateaus and their surrounding valleys. These plateaus generally have the name achada (Achada de Santo António, Achada de São Filipe, Achada Eugénio Lima, Achada Grande, Achadinha, etc. — achada being a Portuguese word to designate a volcanic plateau), but the central one is colloquially called Plateau (in Portuguese itself). The urban settlement is made mostly on top of these plateaus and along the valleys. The islet of Santa Maria is in front of the beach bearing the same name (today more known as Gamboa).

For a long time, only the Plateau was considered to be the city, being the other neighborhoods relegated to the condition of peripheral suburbs, in spite of always having a close relationship with the Plateau (people movements, goods and services exchanges, etc.). This is why only the Plateau previously had relatively well-developed urbanization with its own infra-structures. The remaining neighborhoods developed in a more organic, chaotic way. 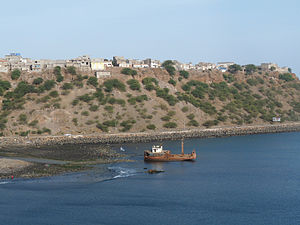 Only after independence did the Plateau merge with the other neighborhoods to constitute what is now considered the City of Praia. The whole city was, at the time, equipped with adequate infrastructure. Urbanization begun immediately after independence and sought to expand north.

The Plateau is still attracting most of the daily traffic within the city because it is still considered the economic and administrative center of the city. In spite of de-centralization attempts, the population continues to consider the neighborhoods peripherals to the Plateau, as either "bedroom communities" or industrial zones.

This was the first stop the HMS Beagle with Charles Darwin.[citation needed] When Edmund Roberts visited Praia in 1832, he noted a "good supply" of fish including mullet and red grouper. He also noted date palms being plentiful in the area.[2]

Praia features a mild desert climate (Köppen: BWh) with a short wet season and a lengthy, very pronounced dry season. In fact, outside of the months of August, September and October, little precipitation falls on Praia. The city on average sees about 260 millimetres (10 in) of rain per year. Since the coldest month is far above 18 °C (64 °F) its temperature patterns resembles a tropical climate, but lacks enough precipitation to be classified as such.

Despite the fact that it has an arid climate, Praia seldom gets very hot or very cold, due to its oceanside location on Santiago Island. Temperatures are warm and constant with an average high temperature of 27 °C (81 °F) and an average low temperature of 23 °C (73 °F). 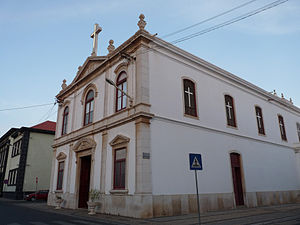 As of the mid-19th century, the population was estimated at 1,500 to 2,000. When Edmund Roberts visited in 1832, he noted a population of black people in Praia totaling about "nineteen twentieths" of the population.[2] 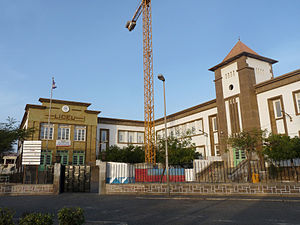 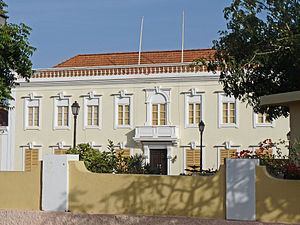 The economy of Praia is dependent above all on the services sector, with some industry as well.[citation needed]

Some industries exist, located on the coast (fishing) or in outlying neighborhoods (rendering of agricultural products, materials for civil construction, etc.)[citation needed]

The principal economic activities of Praia belong to the tertiary sector. Beyond activities related to administration and governance (local and national), there are extensive commerce, services (health care, education, tourism, restaurants and hotels, public functions, etc.), and other activities of a liberal character.

Being the nation´s capital as well as the economic hub, Praia is one the most economically viable cities in the Cabo Verde archipelago. About one third (1/3) of the city's population lives below the poverty line today (2014). The gross metropolitan product for the city is about 39% of the country's GDP, translating into US$4764 income per capita. 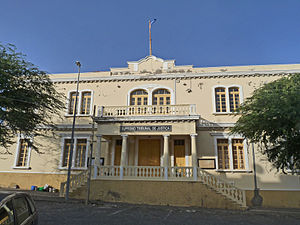 As of the mid-19th century, two roads accessed Praia, one from the east and one from the west, both traveling uphill. During this time, there were 45 cannons outfitting the roads for security of the region and the harbor. The harbor was utilized by ships from West Africa, South America, and the East Indies. September was the low visitation time for Praia by water, due to gale force winds that frequented during that month making harbor visits unsafe.[2]

The city is served by Praia International Airport and TACV Cabo Verde Airlines. 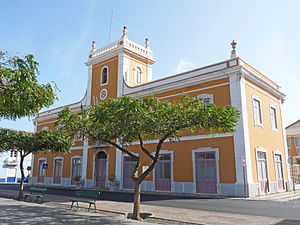 Landmarks in the colonial city center include Albuquerque Square, the old city hall built in the 1920s, the Presidential Palace, which was constructed in the end of the 19th century to house the Portuguese governor and the Monumento de Diogo Gomes, named after the Portuguese navigator who discovered the island of Santiago in 1460.

There is the Museu Etnográfico (Ethnographic Museum), which was founded in 1997. Some of the oldest buildings in Praia are Jaime Mota Barracks (Quartel Jaime Mota) dating from 1826.

Praia is twinned with: