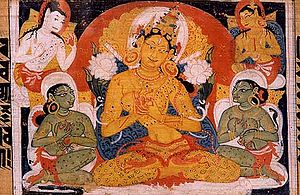 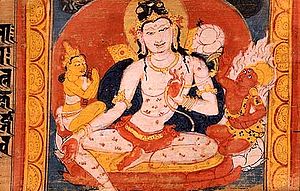 Prajñāpāramitā means "the Perfection of (Transcendent) Wisdom" in Mahāyāna Buddhism. Prajñāpāramitā refers to this perfected way of seeing the nature of reality, as well as to a particular body of sutras and to the personification of the concept in the Bodhisattva known as the "Great Mother" (Tibetan: Yum Chenmo). The word Prajñāpāramitā combines the Sanskrit words prajñā "wisdom" with pāramitā "perfection". Prajñāpāramitā is a central concept in Mahāyāna Buddhism and is generally associated with the doctrine of emptiness (Shunyata) or 'lack of Svabhava' (essence) and the works of Nagarjuna. Its practice and understanding are taken to be indispensable elements of the Bodhisattva path.

According to Edward Conze the Prajñāpāramitā Sutras are "a collection of about forty texts...composed in India between approximately 100 BC and AD 600."[1] Some Prajñāpāramitā sūtras are thought to be among the earliest Mahāyāna sūtras.[2][3]

One of the important features of the Prajñāpāramitā Sutras is anutpada (unborn, no origin).[4][5]

Western scholars have traditionally considered the earliest sūtra in the Prajñāpāramitā class to be the Aṣṭasāhasrikā Prajñāpāramitā Sūtra or "Perfection of Wisdom in 8,000 Lines", which was probably put in writing in the 1st century BCE.[6] This chronology is based on the views of Edward Conze, who largely considered dates of translation into other languages. The first translation of the Aṣṭasāhasrikā Prajñāpāramitā into Chinese occurred in the 2nd century CE. This text also has a corresponding version in verse format, called the Ratnaguṇasaṃcaya Gāthā, which some believe to be slightly older because it is not written in standard literary Sanskrit. However, these findings rely on late-dating Indian texts, in which verses and mantras are often kept in more archaic forms.

In 2012, Harry Falk and Seishi Karashima published a damaged and partial Kharoṣṭhī manuscript of the Aṣṭasāhasrikā Prajñāpāramitā.[9] It is radiocarbon dated to ca. 75 CE, making it one of the oldest Buddhist texts in existence. It is very similar to the first Chinese translation of the Aṣṭasāhasrikā by Lokakṣema (ca. 179 CE) whose source text is assumed to be in the Gāndhārī language. Comparison with the standard Sanskrit text shows that it is also likely to be a translation from Gāndhāri as it expands on many phrases and provides glosses for words that are not present in the Gāndhārī. This points to the text being composed in Gāndhārī, the language of Gandhara (the region now called the Northwest Frontier of Pakistan, including Peshawar, Taxila and Swat Valley). The "Split" ms. is evidently a copy of an earlier text, confirming that the text may date before the first century of the common era.

Overview of the Prajñāpāramitā sūtras 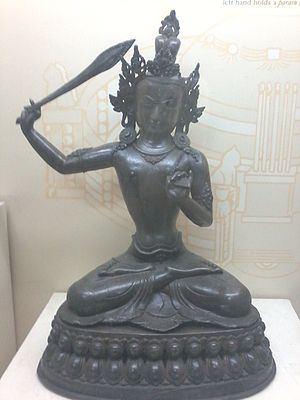 An Indian commentary on the Mahāyānasaṃgraha, entitled Vivṛtaguhyārthapiṇḍavyākhyā, gives a classification of teachings according to the capabilities of the audience:

The titles of these eight Prajñāpāramitā texts are given according to their length. The texts may have other Sanskrit titles as well, or different variations which may be more descriptive. The lengths specified by the titles are given below.

In addition to these, there are also other Prajñāpāramitā sūtras such as the Heart Sutra (Prajñāpāramitā Hṛdaya), which exists in a shorter and longer versions. Regarding the shorter texts, Edward Conze writes, "Two of these, the Diamond Sūtra and the Heart Sūtra are in a class by themselves and deservedly renowned throughout the world of Northern Buddhism. Both have been translated into many languages and have often been commented upon.".[15] Some scholars consider the Diamond Sutra to be much earlier than Conze does.[16] Scholar, Jan Nattier argues the Heart Sutra to be an apocryphal text composed in China from extracts of the Pañcaviṃśatisāhasrikā and other texts ca 7th century.[17] Red Pine, does not support Nattiers argument and believes the Prajnaparamita Hridaya Sutra to be of Indian origin.[18]

Tāntric versions of the Prajñāpāramitā literature were produced from the year 500 CE on and include sutras such as the Adhyardhaśatikā Prajñāpāramitā (150 lines). Additionally, Prajñāpāramitā terma teachings are held by some Tibetan Buddhists to have been conferred upon Nāgārjuna by the Nāgarāja "King of the Nāgas", who had been guarding them at the bottom of the sea.

By the middle of the 3rd century CE, it appears that some Prajñāpāramitā texts were known in Central Asia, as reported by the Chinese monk Zhu Shixing, who brought back a manuscript of the Prajñāpāramitā of 25,000 lines:[19]

When in 260 AD, the Chinese monk Zhu Shixing chose to go to Khotan in an attempt to find original Sanskrit sūtras, he succeeded in locating the Sanskrit Prajñāpāramitā in 25,000 verses, and tried to send it to China. In Khotan, however, there were numerous Hīnayānists who attempted to prevent it because they regarded the text as heterodox. Eventually, Zhu Shixing stayed in Khotan, but sent the manuscript to Luoyang where it was translated by a Khotanese monk named Mokṣala. In 296, the Khotanese monk Gītamitra came to Chang'an with another copy of the same text.

Xuanzang returned to China from India with three copies of the Mahāprajñāpāramitā Sūtra which he had secured from his extensive travels.[20] Xuanzang, with a team of disciple translators, commenced translating the voluminous work in 660 CE using the three versions to ensure the integrity of the source documentation.[20] Xuanzang was being encouraged by a number of the disciple translators to render an abridged version. After a suite of dreams quickened his decision, Xuanzang determined to render an unabridged, complete volume, faithful to the original of 600 fascicles.[21]

Mahayana Buddhism took root in ancient Java Sailendra court in the 8th century CE. The Mahayana reverence of female buddhist deity started with the cult of Tara enshrined in the 8th century Kalasan temple in Central Java. Some of Prajnaparamita's important functions and attributes can be traced to those of the goddess Tara. Tara and Prajnaparamita are both referred to as mothers of all Buddhas, since Buddhas are born from wisdom. The Sailendra dynasty was also the ruling family of Srivijaya in Sumatra. During the reign of the third Pala king Devapala (815-854) in India, Srivijaya Maharaja Balaputra of Sailendras also constructed one of Nalanda’s main monasteries in India itself. Thereafter manuscript editions of the Ashtasahasrika Prajnaparamita Sutra circulating in Sumatra and Java instigated the cult of the Goddess of Transcendent Wisdom.[22]

The statue of Prajnaparamita of East Java is probably the most famous depiction of the goddess of transcendental wisdom, and is considered the masterpiece of classical ancient Java Hindu-Buddhist art in Indonesia. It was discovered in the Cungkup Putri ruins near Singhasari temple, Malang, East Java. Today the beautiful and serene statue is displayed on 2nd floor Gedung Arca, National Museum of Indonesia, Jakarta.