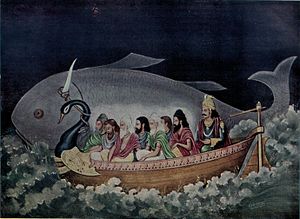 Pralaya (Sanskrit), in Hindu cosmology, is an aeonic term for Dissolution, which specifies different periods of time during which non activity situation persists, as per different formats or contexts. The word Mahapralaya stands for Great Dissolution. During each pralaya, the lower ten realms (loka) are destroyed,[1] while the higher four realms, including Satya-loka, Tapa-loka, Jana-loka, and Mahar-loka are preserved. During each Mahapralaya, all 14 realms are destroyed.

In the Samkhya philosophy, one of the six schools of classical Indian philosophy, Pralaya means "non-existence, a state of matter achieved when the three gunas (principles of matter) are in perfect balance. The word pra-laya comes from Sanskrit meaning 'dissolution' or by extension 'reabsorption, destruction, annihilation or death'.

"Pralaya" appears in the Persona series of games (specifically Persona 3 and Persona 4) as an attack. While it can be inherited to other Personae, its original user is "Shiva", a Persona based on the Hindu deity of the same name.

Pralaya is also the name of an antagonist in the DC Comics series Justice League Dark who appears in the series' final arc, threatening to destroy the fictional multiverse.