Prattville is a city in Autauga and Elmore counties in the State of Alabama. As of the 2010 census, the population of the city is 33,960. Nicknamed "The Fountain City" due to the many artesian wells in the area, Prattville is part of the Montgomery metropolitan statistical area and serves as the county seat of Autauga County. The city is northwest of Montgomery.

Prattville was founded in 1839 by industrialist and architect Daniel Pratt. The area was largely inhabited by native Americans and a few settlers when Pratt, a native of Temple, New Hampshire, first observed the Autauga Creek in the 1830s. He purchased approximately 1,000 acres (4.0 km2) from Joseph May at $21.00 an acre, and set out to build his manufacturing facilities and the town along the banks of the Autauga creek. The location was chosen because the creek could supply power to the cotton gin manufacturing equipment. The town became an industrial center and rapidly grew. In 1868, it was named the county seat for Autauga County.[3]

On February 17, 2008, Prattville was hit by an F3 tornado which destroyed more than 45 homes and businesses and damaged over 700. Twenty-nine people were injured with no fatalities. Preliminary estimates put the damage at $85 million in insured and uninsured damages.[5]

There were 12,711 households out of which 35.5% had children under the age of 18 living with them, 55.1% were married couples living together, 4.1% had a male householder with no wife present, 14/0% had a female householder with no husband present, and 26.8% were non-families. 22.9% of all households were made up of individuals and 7.9% had someone living alone who is 65 years of age or older. The average household size was 2.64 and the average family size was 3.12.

East Memorial Christian Academy is located in an unincorporated area of Autauga County, near Prattville.[12]

Prattville is part of the Montgomery television market. WOW! (through the Knology brand) and Charter provide cable television service. DirecTV and Dish Network provide direct broadcast satellite television including both local and national channels to area residents. The local radio station is WIQR 1410 AM, airing a sports radio format and featuring programming from Sporting News Radio. Prattville is also served by two news publications, the twice-weekly Prattville Progress newspaper and the Our Prattville web magazine.[13][14]

The city has become a popular golf destination, featuring the Capitol Hill golf courses (part of the Robert Trent Jones Golf Trail). Its Senator Course hosted the Navistar (now Yokohama Tire) LPGA Classic on the LPGA Tour from 2007 through 2012 when Navistar ended its sponsorship. There was no LPGA event at this course in 2013. The 2014 event, now known as the Yokohama Tire LPGA Classic after its new sponsor, is scheduled for September 18–21.

High Point Town Center is a large shopping center built in Prattville between 2007 and 2008. It is largely vacant beyond its anchor stores.

Major highways that pass through the city include:

Prattville also has a small airport about 3.5 miles from downtown. 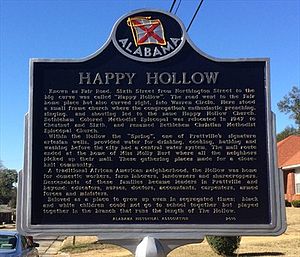 Gabriel García Marquez mentions Prattville in his well-known work One Hundred Years of Solitude; Prattville is referred to as the original city of Jack Brown, the founder of the banana company.[17]

A popular ghost-story known as "The Lady in Black," inspired by deaths caused by poor working conditions in the nearby factories of downtown Prattville, is a poplar phenomena described by most as a black, ghastly figure that goes across the nearby dam during the night of 1 A.M to 4 A.M, and has been featured on the Ghost Hunting show, Deep South Paranormal.